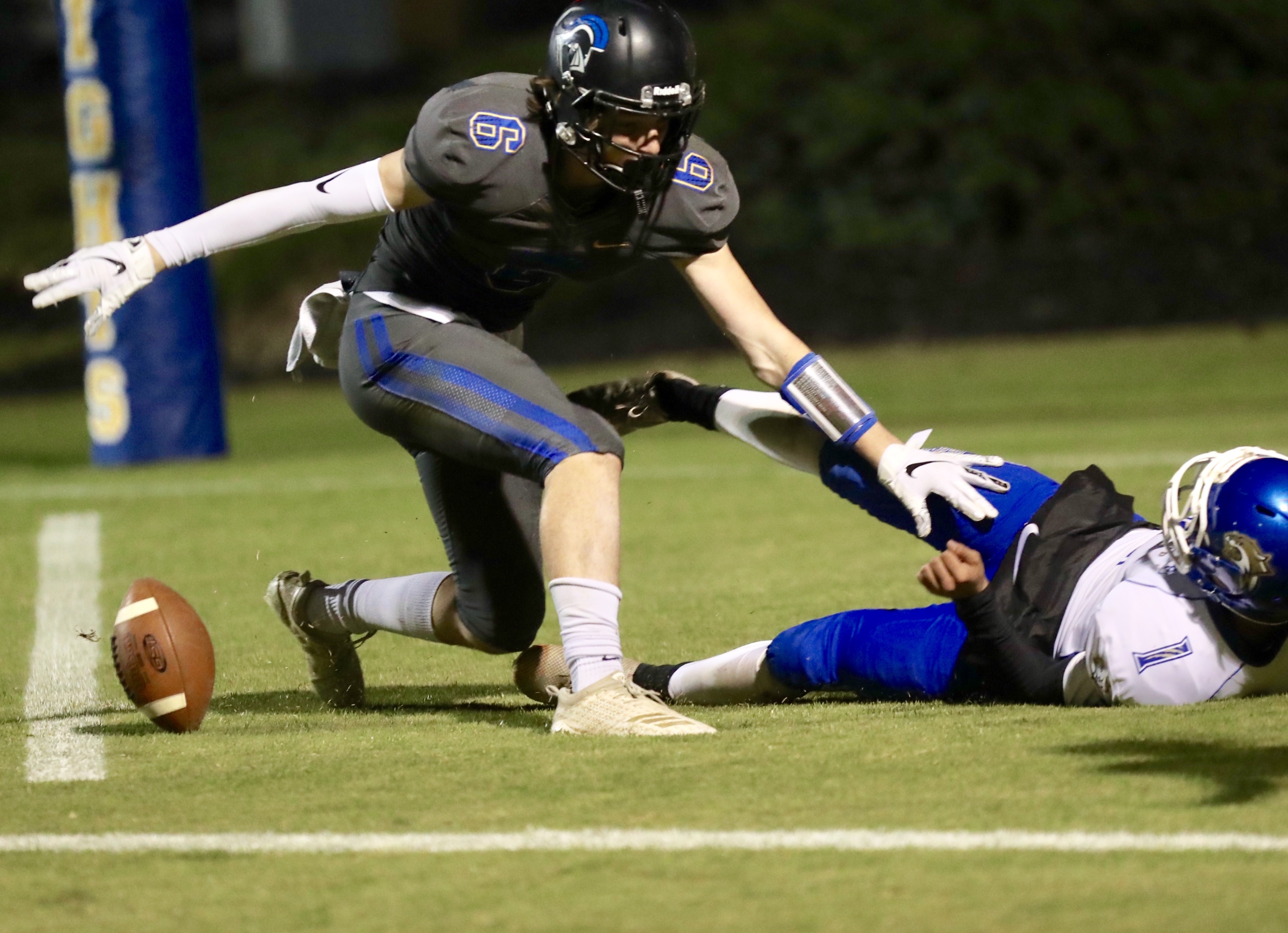 Ripon Christian defensive back Sean McGovern breaks up a pass into the end zone duringa 28-0 victory over Waterford in the quarterfinal round of the Sac-Joaquin Section Division VI playoffs on Friday, Nov. 9, 2018. (Wayne Thallander)

Poll: Which Friday game is the Chicken Ranch Casino Game of the Week?

EDITOR'S NOTE: The Sac-Joaquin Section Division II semifinal between Inderkum and Central Catholic will be the Chicken Ranch Casino Game of the Week when the postseason continues Nov. 23-24. With approximately 54 percent of the vote, Inderkum-Central Catholic was the winner of the fan poll.

Help us select the Chicken Ranch Casino Game of the Week.

On Friday, four regional teams will host a Sac-Joaquin Section semifinal game, but only one can be FrontRowPreps.com's game of the week. The four candidates are:

Inderkum (11-0) at Central Catholic (10-1): The Raider look to clinch their first Division II section final appearance in 26 years, but will need to slow down one of the top rushing attacks in Northern California. To this point, no one has bested the Tigers, who are 11-0 and flying high after a victory over Downey last week. Inderkum fell behind 14-13 early in the second quarter but outscored Downey, a perennial public-school champion, 55-16 the rest of the way. Central Catholic has won nine straight games and might be the most balanced team left in this bracket. The Raiders are averaging 6.3 touchdowns per game, despite pulling many of its starters at halftime, the defense ranks among the best in the section. To vote, click here.

Bear River (10-1) at Ripon (10-1): It's been 22 years since the Indians' last section final appearance and all that stands in the way is Bear River, a six-time finalist and three-time champion. Ripon rolls into the semifinal on the heels of a 49-20 victory over Mountain House, a Western Athletic Conference tri-champion. The Indians' defense and athleticism was on full display in that game with Danny Hernandez scoring a pair of highlight-reel touchdowns, including a 93-yard interception return. Ripon has won three straight since its humbling loss to Escalon. The last time Ripon clinched a section final appearance was 1996, when it beat Mariposa for its first and only blue banner. To vote, click here.

Escalon (9-2) at Hilmar (9-2): Could the "Game of the Year" be on tap when these two Trans-Valley League rivals meet Friday night at McSweeney Field? If their last two meetings are any indication, bring a camera and blanket ... and settle in. Hilmar has won both meetings, and begun its run by sending legendary Escalon coach Mark Loureiro, the section's all-time winningest coach, into retirement with a 53-52 double-overtime victory in the Division VI semifinal a year ago. In September, backup kicker Miguel Padilla lifted Hilmar to a 20-17 win with a 33-yard field goal in overtime. Padilla only got his chance to kick because Bryan Millan was injured moments earlier trying to make a sensational catch in the corner of the end zone. To vote, click here.

Ripon Christian (11-0) at Modesto Christian (10-1): This game will feaure the top scoring defenses in the Sac-Joaquin Section. Ripon Christian is on a historic path, but the Knights haven't been wowed by their own accomplishments. Standout running back Michael Kamps believes this is a special group destined for more than just a Southern League championship and semifinal appearance. Ripon Christian seeks its second straight section finals appearance, but they'll have to knock out arguably the hardest-hitting small-school team in the region. Led by Hayden Sauser and Xavier Carlton, Modesto Christian also seeks a return to the section final. To vote, click here.