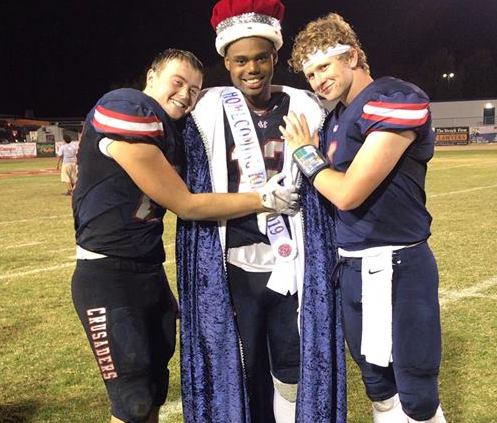 Popular on & off the field, Homecoming King highlights TVL win with TD catches

Modesto Christian's Johnny Williams is the American Chevrolet Small-School Athlete of the Week.

Williams caught two touchdown passes in the Crusaders' 46-7 victory over Livingston last week. No. 2 Modesto Christian has won eight consecutive games to start the season and improved to 4-0 in Trans-Valley League play.

"Awards are all about the team," Williams said. "I dedicate it all to the work we put in over the summer."

Williams finished with 45 yards on three receptions, two tackles and two deflected pass attempts, and punctuated his evening with a homecoming coronation. Williams was named the school's Homecoming King during an on-the-field ceremony, edging teammates Hayden Sauser, his quarterback, and Isaac Schinmann, another two-way star.

"Individually, it was a great night," said Williams, whose large rooting section included both sets of grandparents. "It was a special night."

The Crusaders travel to No. 3 Hilmar on Friday for a rematch of their Sac-Joaquin Section Division VI final, a game won by the Yellowjackets.

Williams may need to have another big night for Modesto Christian, which will play without national recruit Xavier Carlton, a defensive end and tight end. Carlton was suspended for this week's game after being ejected from the win over Livingston.

"Hilmar is a great team, well-coached and very disciplined," Williams said. "Losing X ... X is a great player. He leads us and does a lot for us, but we have the utmost confidence in tight end Dillon Johnson and Wisdom Crosby. The guys we got stepping up know their job and know it's time to shine. We just got to crank it up a little more."