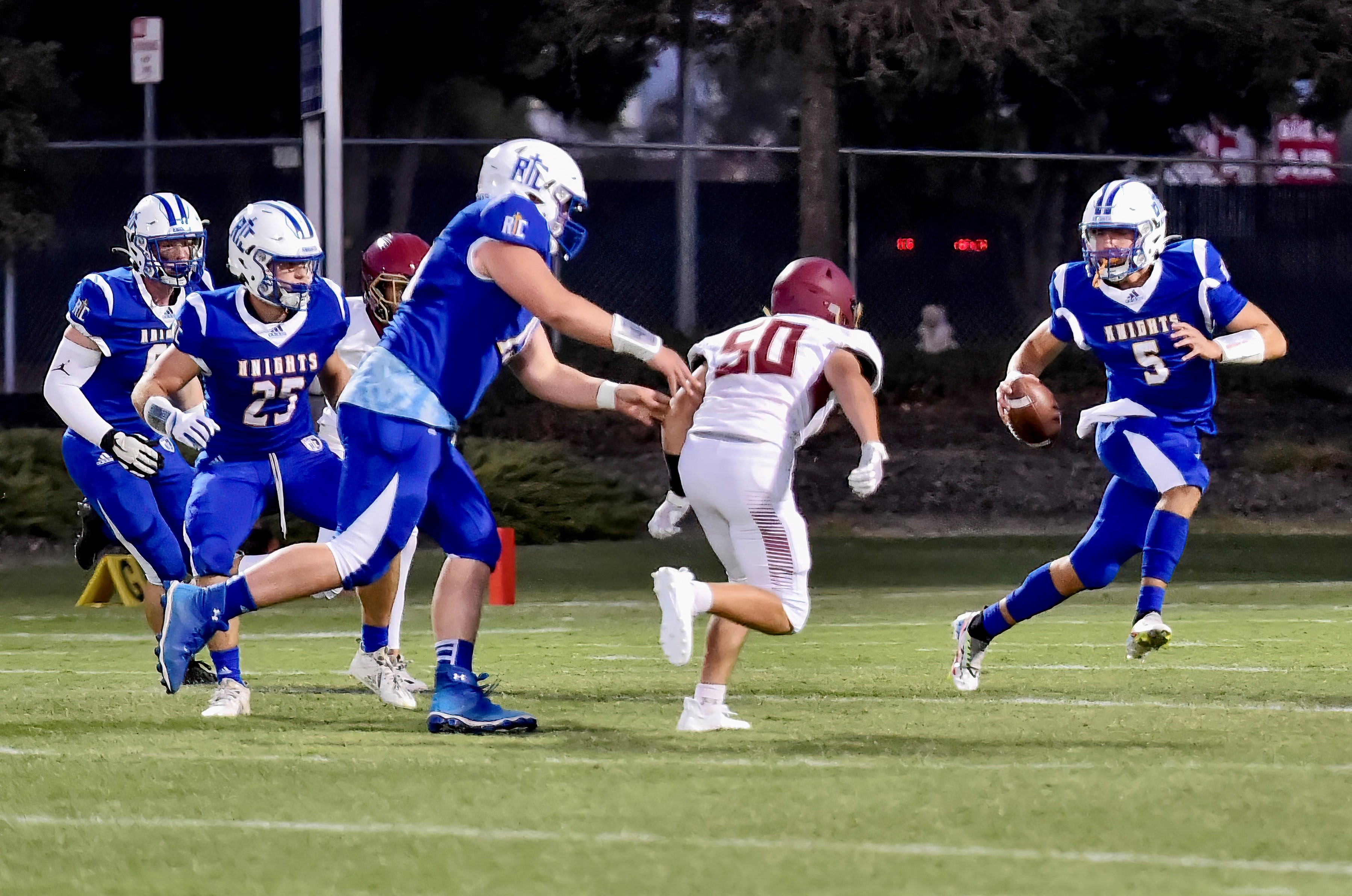 Quarterback Trey Fasani keeps his eyes down field as he evades Calaveras' pressure. Fasani has been a key contributor to the Knights' run to Friday's Sac-Joaquin Section Division VII final, throwing 28 touchdowns while completing nearly 66 percent of his passes. (Courtesy of the Manteca Bulletin)

'Practice like pros': Smartened by defeat, RC one step away from section crown

The low point of Ripon Christian’s football season turned out to be its turning point.

The Knights had lost to Orestimba 21-7 in September, a disappointment they knew had cost them the Southern League title. They would either recover or regress, RC understood.

“We weren’t sure what we had, but we realized that without the mistakes we made we would have beaten Orestimba,” head coach Phil Grams said. “From that moment on, we practiced like pros.”

The result is a 7-0 run that has carried Ripon Christian (10-2) to the Sac-Joaquin Section Division VII title game against Woodland Christian (11-1). The game will be played at Sanguinetti Field on the campus of St. Mary’s High of Stockton on Friday night at 6 o’clock.

Clearly, Woodland Christian and Ripon Christian towered over the rest of the D-VII bracket. Their showdown, at least according to the numbers, promises fireworks on offense. The Cardinals averaged 40.7 points per game, barely ahead of the Knights’ 39.7.

“Randy has so much to offer,” Grams said. “His creativity is special.”

Fasani, the former star at Del Oro High and standout quarterback at Stanford, dials up the playbook for his son, 6-foot-2 senior quarterback Trey Fasani. He’s completed about two out of every three passes for 1,653 yards and 28 touchdowns and 13 interceptions. He’s also rushed for six scores.

“Griffin is one of the best wide receivers in the section,” Grams praised. “He was only honorable mention in the Southern League”

Grams also spoke highly of Fasani during Monday’s 12th annual Champions Breakfast, a gathering of coaches and players from all section finalists in Lodi.

“Trey is the first to arrive and the last to leave every day. He’s got the pedigree,” Grams said Tuesday. “He is not getting the attention he deserves. He should be playing on Saturdays (next year).”

Ripon Christian and Woodland Christian both tiptoed through a legal minefield just to reach the championship game.

The Knights were barred from the postseason for two years after they were one of three schools identified by the section for playing non-sanctioned games in February and March of 2021. RC went 7-3 last fall and no doubt would have made waves in the playoffs.

The section lifted the ban this year, however, with one caveat: RC could not be the host for playoff games. The road did not bother the Knights. They belted Rio Vista 57-0 and, last week, overwhelmed Stone Ridge Christian – another school that couldn’t play post-season home games – 57-12 at neutral-site Oakdale. Capital Christian, the third school suspended last year by the section, meets Vanden for the DIV title on Saturday afternoon.

“We decided that we would play for each other, for our fans and for the people who came here before us,” Grams said. “We’re playing now for a bigger cause than ourselves.”

Grams already knows how winning at this level feels. His Capital Christian team defeated Modesto Christian for the DVI title in 2014.

Woodland Christian slogged through a tumultuous week before its playoffs opener. The section ruled the Cardinals ineligible due to a paperwork oversight involving 11 freshman players. A Yolo Superior Court judge quickly granted a temporary restraining order, however, and WC coasted past Gustine 45-8 and Le Grand 45-0.  The matter is to-be-continued, but the title game will go as scheduled.

The Cardinals have advanced to the D-VII final for the second straight year. They were beaten by Le Grand last season, which made last week’s answer a sweet one. This year, Woodland Christian has rushed for 50 touchdowns with a small army of running backs anchored by Billy Hinkle (18 total TDs).

Ripon Christian advances to the championship game for the fourth time and seeks its first football blue banner. This is no doubt its best team since the 12-1 squad that reached the D-VI final in 2018 and the 11-1 Knights of 2019.

Grams confirmed that Ripon Christian, should it advance to the NorCal level, will be allowed to host a home game.

For now, there is only one relevant thing for the Knights:  They’re one of 14 section teams still playing.