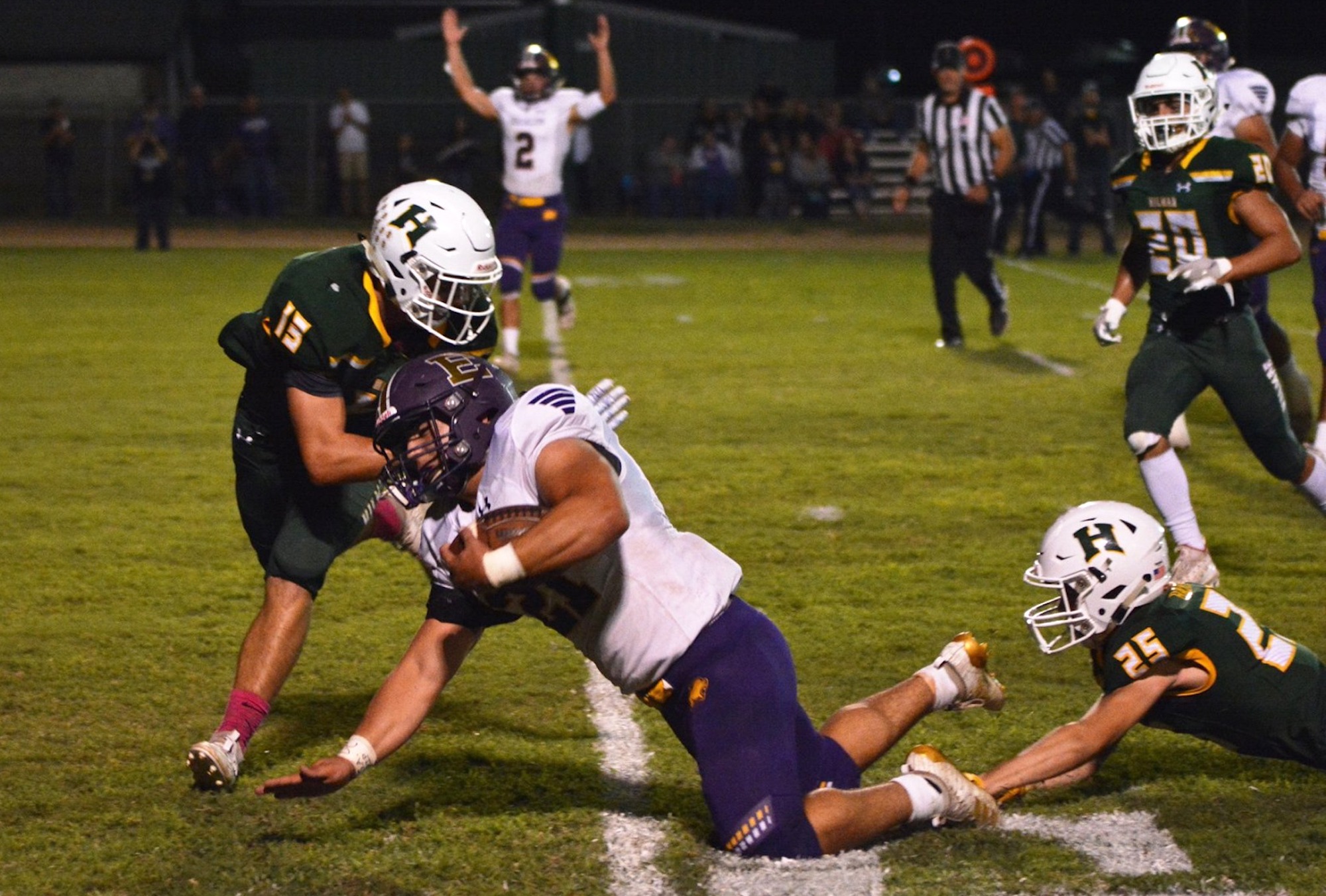 Escalon running back Luke Anderson bowls his way into the end zone during a 34-21 victory over Hilmar on Sept. 27. (AnnaMarie Silveira)

Recent history dictates that the Escalon High Cougars and Hilmar Yellowjackets should drop the pretense and prepare for the obvious.

They always meet twice a year, it seems, so why not just schedule it?

“This is the way it always seems to end,” Hilmar coach Frank Marques admitted.

These two longtime rivals, one draped in purple and the other in green, will resume their argument, only this time for the Sac-Joaquin Section Division VI title, Saturday at 1 p.m. at Stockton’s Lincoln High. They’ve clashed twice a season six times since 2011, so scouting their opponent basically means little.

When they stare into the mirror, they see each other: Small agri-dairy towns who take their football teams seriously and with great passion. Surprisingly, there’s not much bitterness, only mutual respect and a hunger to win.

Since 1998, Hilmar and Escalon are 12-12 head-to-head. No other statistic better reflects the matchup.

“It’s like tradition against tradition and small town vs. small town,” said Escalon two-way lineman Jacob Walden, one of the Cougars’ team captains. “No matter what happens, we just love these games.”

Hilmar (11-1) enters as the defending section and state 6-AA champion, the team that has ended Escalon’s season the last two years. Meanwhile, the Cougars (11-1) return to the section final for the first time since 2012.

Escalon, remembering its twin losses to Hilmar in 2018, responded with an efficient 34-21 victory on Sept. 27. The Cougars, often out-flanking the Hilmar defense on belly sweeps, pounded for 321 rushing yards that night and, in 48 rushing attempts, were stopped for minus yardage only twice.

That’s where the showdown strategy begins: Can the Yellowjackets offset Escalon’s advantage up-front?

They believe the answer is “yes” for two reasons: The maturation of junior quarterback Seth Miguel and the blossoming of senior wide receiver Justin Barros, a handy No. 2 pass-catching threat along with Aidan Azevedo.

“Everyone knows the four or five names you see in the paper each week. It’s the five or six other guys who will decide this game,” Escalon second-year coach Andrew Beam said. “It’s going to come down to old-fashioned things like who can block and tackle and who can avoid the turnovers.”

The Cougars, like their counterparts, have evolved. They lost three two-way starters to injury during the first half of their 40-21 loss to Ripon on Oct. 18. Two of those mainstays, running back Luke Anderson and lineman David Camacho, are back in the lineup.

Beam also noted the promotion of late-season starter Alonzo Teixeira, a tackle, and the progress of middle linebacker Bryan Hale and defensive back Eli Lattig.

Marques, wrapping up his 17th season as Hilmar coach, understands the importance – especially in today’s elongated seasons – to sustain improvement.  Two years ago, the Yellowjackets were 5-5 and rallied to a section title. Last year, they lost twice and took home the state trophy with room to spare.

Another fact the Hilmar coach knows too well: His teams are 1-2 vs. Escalon in section title games.

“We’ve improved and they have improved,” Marques said. “I think it comes down to the quality of the Trans Valley League. I told Andrew a year ago that the winner of that playoff game (vs. Escalon) would win state. I really believe that.”

Marques thought an Escalon rematch this year would not happen. In fact, he told his team that immediately following this season’s game. At the time, the consensus was that Escalon would be moved to Division V.

Then, in that memorable post-game huddle, Marques added: “I wish we could play ‘em again tonight.”

Call it a wish granted. Eventually.

“Our defense has played some super football. We have to keep doing what we’ve done the last four weeks,” Marques said.   “Both teams have beaten really good opponents to get here. Now we just have to play the game.”