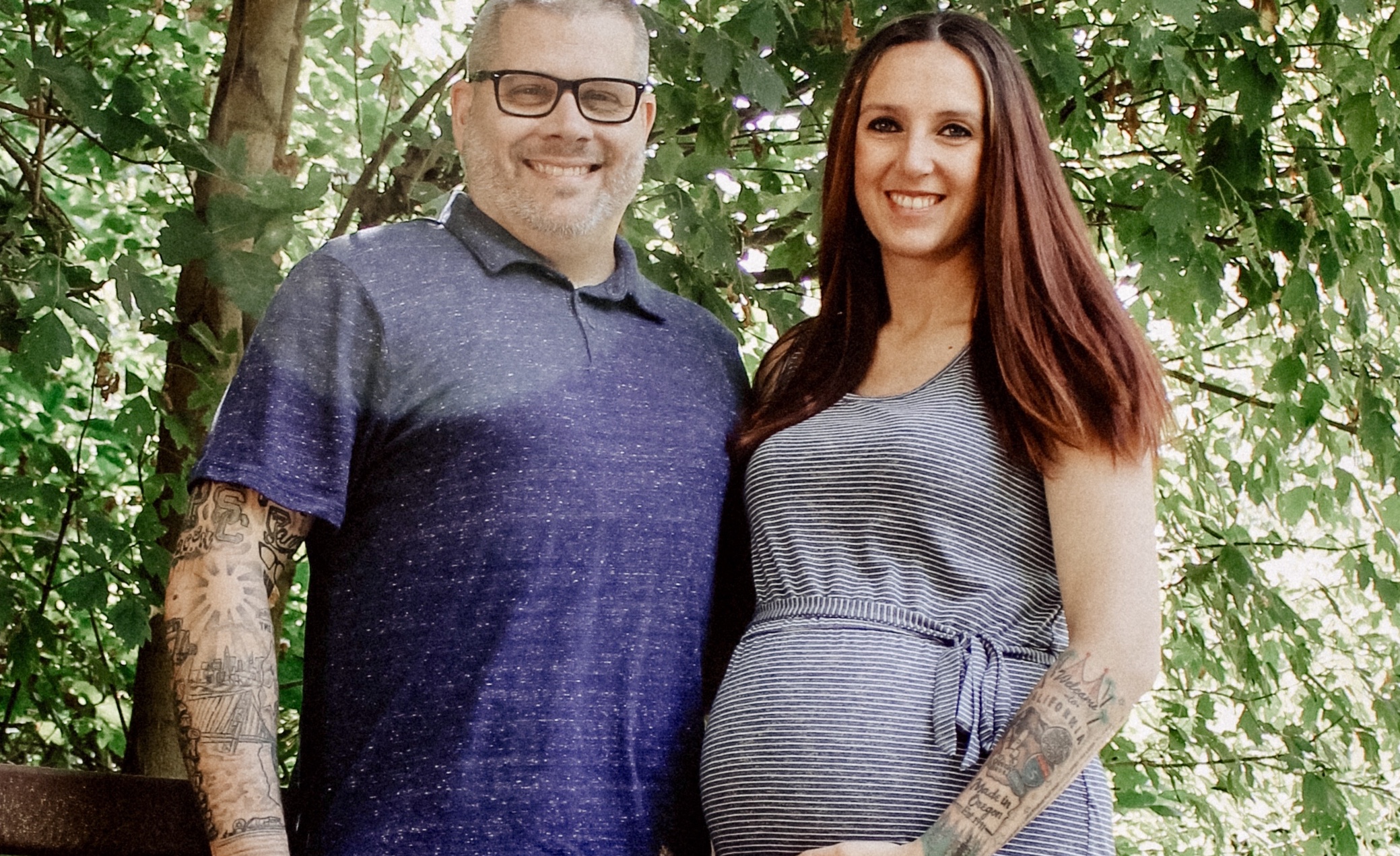 Beyer football coach Greg Bockman (left) is joined by his wife, Ashley Bockman. In this photo, Ashley is pregnant with their son Ace. They also have older son named Sylas (not pictured).

Beyer's Bockman: 'I want kids to commit to a more intense year-round program'

Greg Bockman understands his name might not carry a lot of clout on the high school football circuit, but Beyer’s new football coach also knows this:

After a winless season, the Patriots can only improve, and Bockman hopes his relationships on campus, his passion for the game and his commitment to building a year-round football program will expedite the process.

Bockman replaces longtime coach and current athletic director Doug Severe, who stepped down after a rough indoctrination into the Western Athletic Conference. Beyer was 0-10 in Severe's 10th and final season.

“I know I'm not the most glamorous hire in the world,” said Bockman, who served as the Patriots’ junior varsity offensive coordinator last season. “People want to know my experience and maybe it doesn’t fit people’s criteria for a head coach, but I know high school football and I’ve been around a little bit.”

While Bockman is a rookie varsity coach, he’s filled many capacities in the game of the football. He’s been a player, an assistant coach, an official and a fan. As the offensive coordinator, the Patriots switched to a Spread offense and finished at the top of the WAC table.

Today, he acclimates himself to the lead seat at a public-school program with untapped potential. His first week on the job has been filled with phone calls, text messages and more hand-stinging high-fives than he can count.

As he moves forward, Bockman, a former varsity girls basketball coach at Davis, plans to fill out his coaching staff, set the Patriots’ off-season schedule and begin meeting with players. With a busy schedule ahead, the 44-year-old campus employee found time to speak with FrontRowPreps.com about his hire, the state of the football program and its future.

FR: What allowed the Beyer junior varsity team to have so much success, especially during a season the varsity team struggled mightily?

GB: We had a good group of freshmen that came in. To tell you the truth, on both sides of the ball, we started 10 freshmen. We had a good group that came in and bought into what we were teaching. It made it attractive to them. We changed up the offense a little bit; we changed to the personnel we had and spread things out a little bit. We had fun and scored a lot of points. It came down to us building relationships with the kids and getting them to buy in. When they know you care about them, that relationships speaks volumes. You go to battle every week, and you learn to rely on them and they learn to rely on you. I built a strong bond with these young men.

FR: Do you have confidence the turnaround can happen quickly? Or will it be a process:

GB: I wish I had a crystal ball to predict for sure, but I think we can improve on how things went last year. We have a good core group coming back from last year, and the offensive line was all sophomores and juniors. We’re returning a solid offensive line, and when you add some younger pieces, I anticipate us to hit the ground running and to improve immediately.

GB: The announcement came out Friday and it’s been a whirlwind ever since. There have been a lot of phone calls, text messages and congratulations. The support has been great. My first order of business is a spring strength and conditioning program. I’m in the process of getting the paperwork going and the facilities schedules. That’s business No. 1 — to improve our strength and agility levels. We need to get bigger, strong and faster.

FR: Are you committed to building a year-round program at Beyer?

GB: At Beyer, we have to share our athletes. We just can’t have specialized kids or we wouldn’t have success in anything. We still encourage them to do other sports, but football has evolved over the years. When I played in the 90s, you started football in June and ended in November. There was no AAU or passing tournaments. I think the sport has evolved with all the passing tournament, year-round recruiting, showcases and evaluation months. My vision is to have something a little more year-round. We want them to have breaks and rest and enjoy their summer, but the word the kids will hear a lot from me is “commitment.” They’ll hear me say that more than they like. I’m a football fanatic. You look at these great programs around the United States and they play football year-round. By no means are we Mater Dei, but I want the kids to commit to a more intense, more vigorous year-round program.

FR: Have you picked your staff?

GB: I’m working on it right now. I’ve spoken to a couple of people, but I won’t throw any names out yet. … Now that things are final, those conversations and negotiations can heat up at this point.

FR: Will you bring many of those freshmen with you to the varsity level? Do you think it could ease your transition?

GB: There’s a good possibility of that. I want to make the situation comfortable for those guys, too. The relationship we have is important. I want to listen to them and get their input. We’ve thrown that out there to a couple of the guys, about going up to varsity. They’ve created an incredible bond between each other, so that’s something we’ll have to explore.

FR: Did you always have ambitions of being a varsity coach?

GB: I have three daughters, so my daughters couldn’t play football. I focused my time and energy on other sports, but my love has always burned for football. Once they graduated, I dabbled in football stuff, trained some football players in the weight room, and I’ve always been around it. To tell you truth, I’ve always dreamed of doing this. This opportunity is amazing and I can’t explain in words how I feel.

FR: Who has had the most influence on your coaching style?

GB: I’ve coached all different levels and different sports, but a local mentor of mine has been Dan Pacheco (former Davis boys basketball coach). I’ve always admired his genuine care and concern for the boys he’s coached and how much he’s willing to help. I’ve always really looked up to him. If we’re looking at Xs and Os, football stuff and style, I’ve always admired a guy like Pete Carrol. He might not be the best Xs and Os guy, but he always has great people around him and he’s a motivator. I’m a motivator and a leader, and a guy who believes in relationships.

FR: Your predecessor’s legacy is shaped by relationships. Doug was more than a football coach; he is an all-time human being.

GB: I’ve gotten to know Doug in the last year. I’m honored to know him. I’m honored that I get to sit in the same room as him and talk life. These kids have meant the world to him. Talking to him really motivates me to be a positive influence, and have my boys (Bockman has two sons) look up and say, “Thats my dad.” That’s who Doug Severe is … one of best people I’ve met.