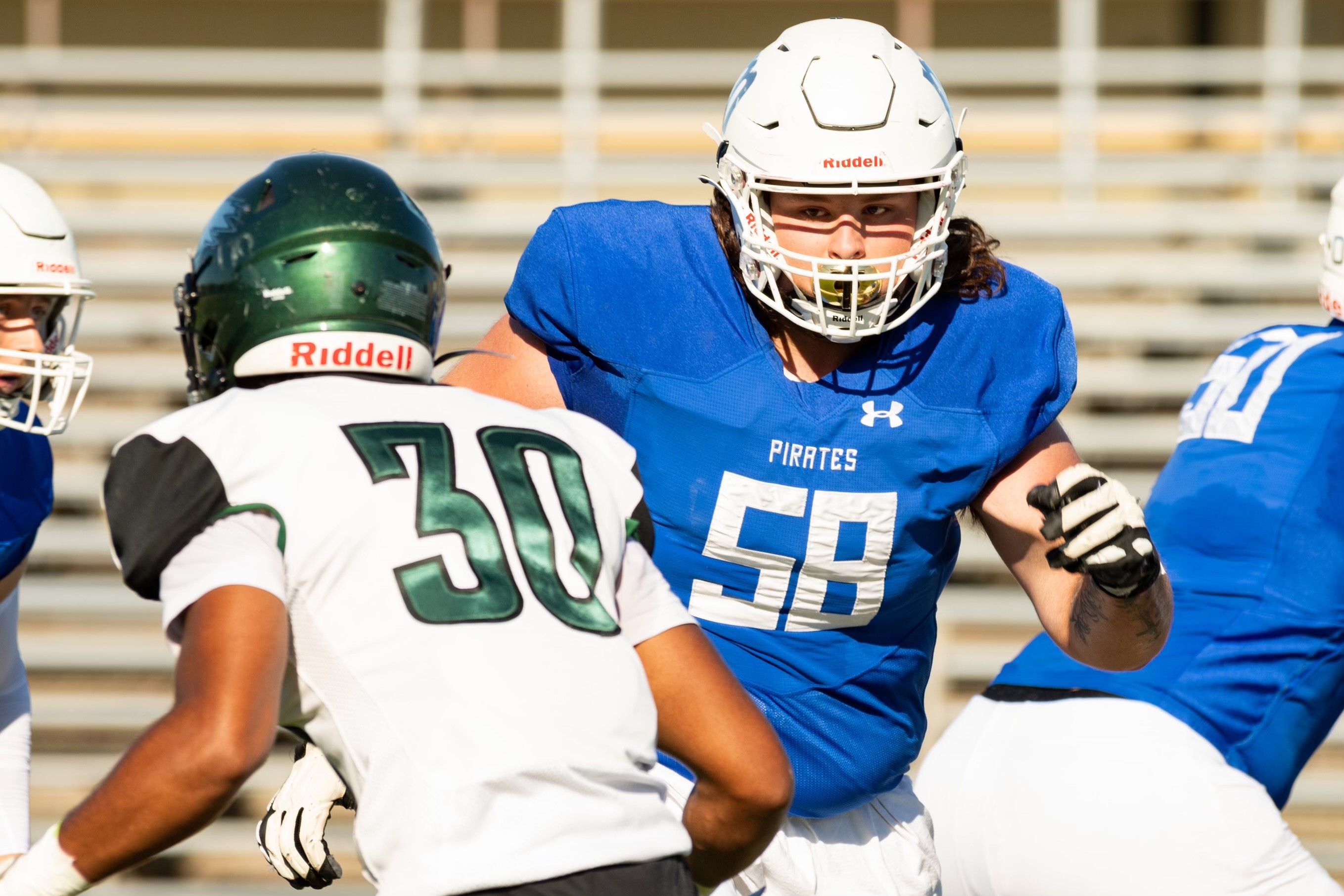 Modesto Junior College's Jacob Edmond (58) looks into the Laney College backfield during a 26-25 loss to open the season. (Diego Hernandez)

The Modesto Junior College Pirates share an early-season goal these days with every community college football team: Get better in a hurry.

It is the ultimate reality test in a genre featuring players’ eligibility for only two seasons. Programs routinely turn over up to two-thirds of their respective rosters each year, so first-year players are given a crash course.

“We just have to grow up fast,” MJC coach Rusty Stivers said Tuesday as the Pirates prepared for Saturday night’s trip to Santa Rosa. “We have to set them up and get them up to speed as fast as we can.”

MJC, 0-1 after a painful 26-25 opening loss Saturday night at home to Laney of Oakland, knows there are few excuses. The Pirates expect to be good this season, but also true is this: They’re starting seven true freshmen, five on offense and two on defense.

Consider the number of true freshman starters on last year’s 9-4 team that shared the Valley Conference title: One.

Still, Modesto attracted a lot of freshman talent this season. The Pirates have raised expectations with their recent success.

Laney scored a touchdown and a 2-point conversion to tie, but the Pirates responded on Luke Weaver’s 22-yard TD pass over the middle to Jacob De Jesus.

The Eagles did not flinch, marching 75 yards in eight plays to score on Regan Wilson’s clutch catch despite good coverage of Demontre Thomas’ 29-yard pass with 20 seconds left.

Laney coach John Beam went for the game-deciding deuce and hit it when Thomas sped to his right and tossed to Dylan Ochoa.

Razor-close games against Laney, a good program which won a state title and a No. 1 ranking in the nation in 2018, are not uncommon. Last year at Oakland, Modesto survived via a late goal-line stand.

That said, giving up 16 points in the final five minutes jolted an MJC team that led most of the night.

“I thought our defense played well enough to win,” Stivers said. “I look at the game in its entirety…We just have to grow up quickly.”

Luke Weaver, only the second true freshman over the last 18 years to start at quarterback for Modesto (the first was Danny Velasquez),  acquitted himself well. He overcame one interception to complete 19 of 32 passes for 265 yards and two touchdowns and also rushed for 53 yards.

“He made some mistakes, but he also made some big-time plays,” Stivers said.

De Jesus, one of the MJC team captains on offense, caught nine passes for 158 yards and the late go-ahead touchdown. The Pirates also outgained Laney 414-297, scant consolation after a tough loss.

Santa Rosa will present another challenge. The Bear Cubs extended defending state champion City of San Francisco last week before falling 31-20. The Pirates have struggled over the years at Bailey Field, an attractive venue with its tall oak tree towering over the northern end zone.

QB CLUB – Seasons often are defined by late game-winning drives, such as the one Downey (3-0) made last week to win 20-17 at Merced. The Knights relied on the running of K.J. Ragland, who also snared an important 18-yard pass from Conner Stoddard to put Downey in scoring position. After two rushing plays brought the Knights to the Merced 1-yard line, Elijah Reyneveld was summoned to kick a 20-yard field goal as time expired. Reyneveld had missed a field goal earlier in the fourth quarter. Downey welcomes Beyer (0-2) for its home opener and homecoming Friday night. …

Gregori (1-2) picked up its first win, a 21-0 shutout over Atwater. Conner Bailey, a junior who made his first varsity start, threw three touchdown passes. The Jaguars travel to Livermore on Friday night. … Johansen (0-2), idle last week, will bus to Lincoln on Thursday night to meet the Twelve Bridges’ Raging Rhinos (2-1), a second-year school which is playing varsity football this season without seniors. “We’re laying low, trying to get healthy,” Johansen coach Rod Smith said. …

Central Catholic (1-2) held a long practice on Monday after its disappointing 47-7 homecoming loss to St. Mary’s. The Raiders were victimized by swift receivers and quarterbacks Samson Hunkin and freshman Devin Rasmussen, who together completed 18 of 23 passes for 263 yards, three touchdowns and zero interceptions. The Raiders’ rigorous preseason schedule already has taken a physical toll, and there’s no rest in sight going into games Saturday night at Serra of San Mateo (2-0 after a 24-21 win over De La Salle last week) and, after a bye, at nationally-ranked St. John Bosco of Bellflower. …