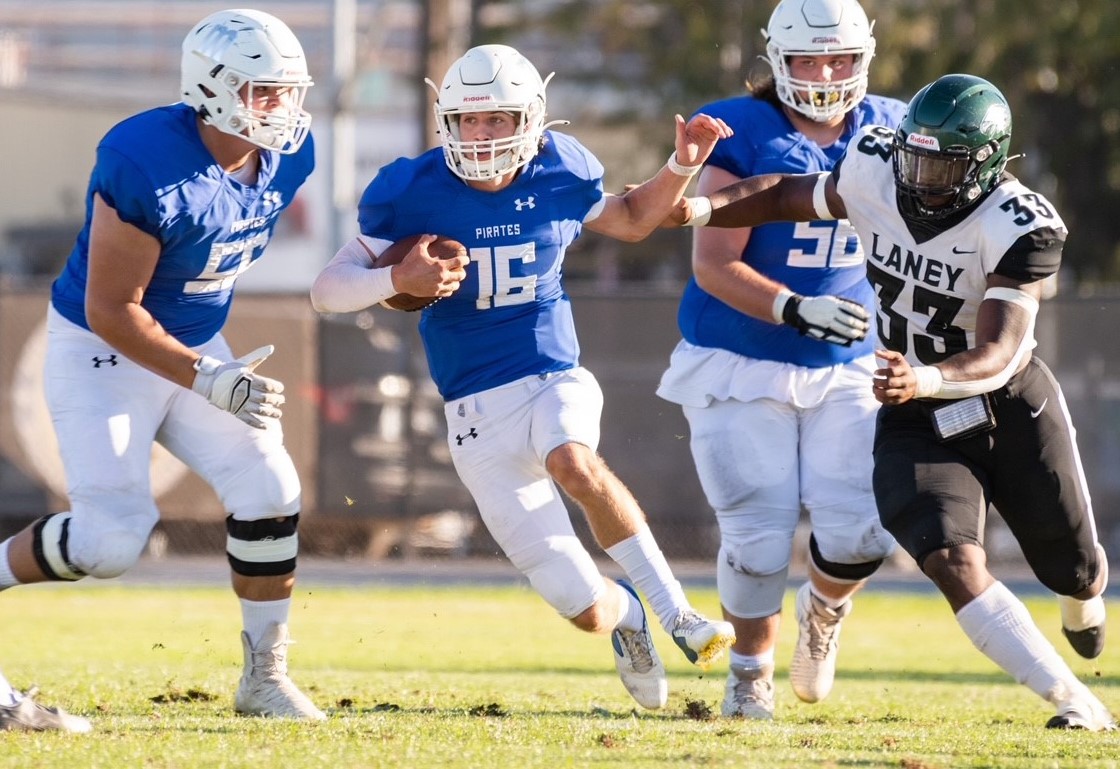 Freshman quarterback Luke Weaver had his season come to an abrupt end during Saturday's loss at San Mateo College. Weaver suffered a dislocated hip in the 35-14 loss. (Diego Hernandez)

MODESTO – College Heights Stadium, the football home of the College of San Mateo Bulldogs, sits on a scenic hilltop overlooking the San Mateo Bridge and the rest of the southern Bay Area.

It’s gorgeous, but the Modesto Junior College Pirates fail to see the beauty. To them, it is their temple of doom.

They’re 0-for-6 at San Mateo since the turn of the century, which more than offsets three MJC home victories over the Bulldogs over the same period.

“We’ve been snakebit on the road against them,” MJC coach Rusty Stivers said Monday.

The Pirates’ San Mateo misery worsened last weekend. Not only were they beaten 35-14, they also lost a quarterback.

Luke Weaver, off to a good start as only the second true freshman over the last 18 years to call signals for Modesto, suffered a dislocated hip early in the game. It was learned he was lost for the season on Monday night, leaving MJC’s usually productive offense in a major lurch.

“He was doing well, even though he made some freshman mistakes, but he also was doing some good leadership things,” Stivers said Tuesday morning. “He got tackled and someone fell on him and it all came together in an unfortunate way.”

Backups Marcus Ordunez and Cruz Marines enjoyed both good and rough moments. Marines threw touchdown passes of 16 yards to Everett Hunter and, late in the game, a 37-yarder to Jonathan Taylor.

“Both did some good things and both made their share of mistakes,” Stivers said. “We’ll work it out in practice and see how it goes.”

Modesto (1-2) gave up touchdowns on the first two series but trailed only 14-7 at halftime. Three turnovers yielded short fields which San Mateo used to pull away in the second half. San Mateo (3-0), ranked No. 1 in Northern California and No. 3 in the state, outgained the Pirates 473-319.

There is no time, however, for Modesto to patiently chart a new course. Butte (2-1), which belted 2021 state champion City College of San Francisco last weekend 35-14, comes to MJC Stadium on Saturday night at 5 o’clock.

“Butte is better all the way around over last year,” said Stivers, whose Pirates defeated Butte last season at Oroville 38-17.

NOTES – Downey (5-0), frontrowpreps.com’s No. 2-ranked large schools teams, usually is led by its lethal offense. Its defense, however, switched the momentum in its favor last week to beat Tracy 24-13. Nose tackle Deontae Huley, a 270-pound senior, has emerged as one of the Knights’ top players. On a key 4th-and-1 stop, Huley tossed aside quarterback Cameron Ross and smothered the option-pitch running back. “He’s a man-child,” Downey coach Jeremy Plaa said during the weekly Modesto Quarterback Club lunch meeting. “He’s just finding out how good he is.”…

The bizarre Modesto-at-Sierra game, continued Monday after fans scurried due to an alleged gun sighting Friday night, resulted in a 59-27 loss for the Panthers. Sierra led 23-20 when the game was resumed with 5:11 left in the half, then blanked the Panthers (2-3) in the second half. Both Downey and Modesto have a bye this week.   … Enochs quarterback Adam Ammar was injured during an auto accident last week, and his status is uncertain for Friday night’s trip to Oakdale. The Eagles (2-2) relied on their defense, which allowed only 145 yards during their 31-6 win last week over Central Valley. Coach Tracey Traub has tight connections with Oakdale. Three of his sons played for the Mustangs. …

Modesto Christian, 4-0 going into its Trans-Valley League opener against Ripon, was overwhelmed by the Indians 54-19. Receiver Jeremiah Bernard enjoyed a huge game despite the loss, catching 11 passes from sophomore Ross Widemon for 154 yards and a touchdown. He also intercepted a pass. The Crusaders will meet Riverbank at home. …

Grace Davis (2-2, 1-0) hung on for a 23-21 win over Mountain House as the Spartans began the defense of their Western Athletic Conference title. Jackson Brooks, a junior, caught five passes for 171 yards and two touchdowns, excelled on defense and even kicked a 29-yard field goal. Davis meets Los Banos on Friday night at Downey. …

A test awaits Big Valley Christian (1-2, which travels to Clarksburg to face Delta (4-0). The Lions rushed for 409 yards during their 29-0 homecoming victory last week over Encina Prep of Sacramento. … Johansen coach Rod Smith believes there is improvement ahead for the Vikings despite their 0-4 record. Johansen, which opened WAC action with a 16-6 loss to Pacheco, travels to Mountain House. “A lot of young mistakes, but we’re loaded with sophomores and juniors. We have only four senior starters,” Smith said. …

Gregori (1-3), off last week, motors to unbeaten Lodi for its final tuneup before the Central California Athletic League season. … A tip of the cap to Bret Harte, which won its first game in three years by beating Millennium 31-7 on homecoming night. The Bullfrogs (1-3), who did not field a team last season after the 2020 pandemic layoff, had only four days to prepare after a 74-16 loss to El Dorado in a rescheduled game. Coach Kelly Osborn, noting the team was down to only 16 healthy players, considered a forfeit. The Bret Harte seniors opted to play and eventually celebrated.