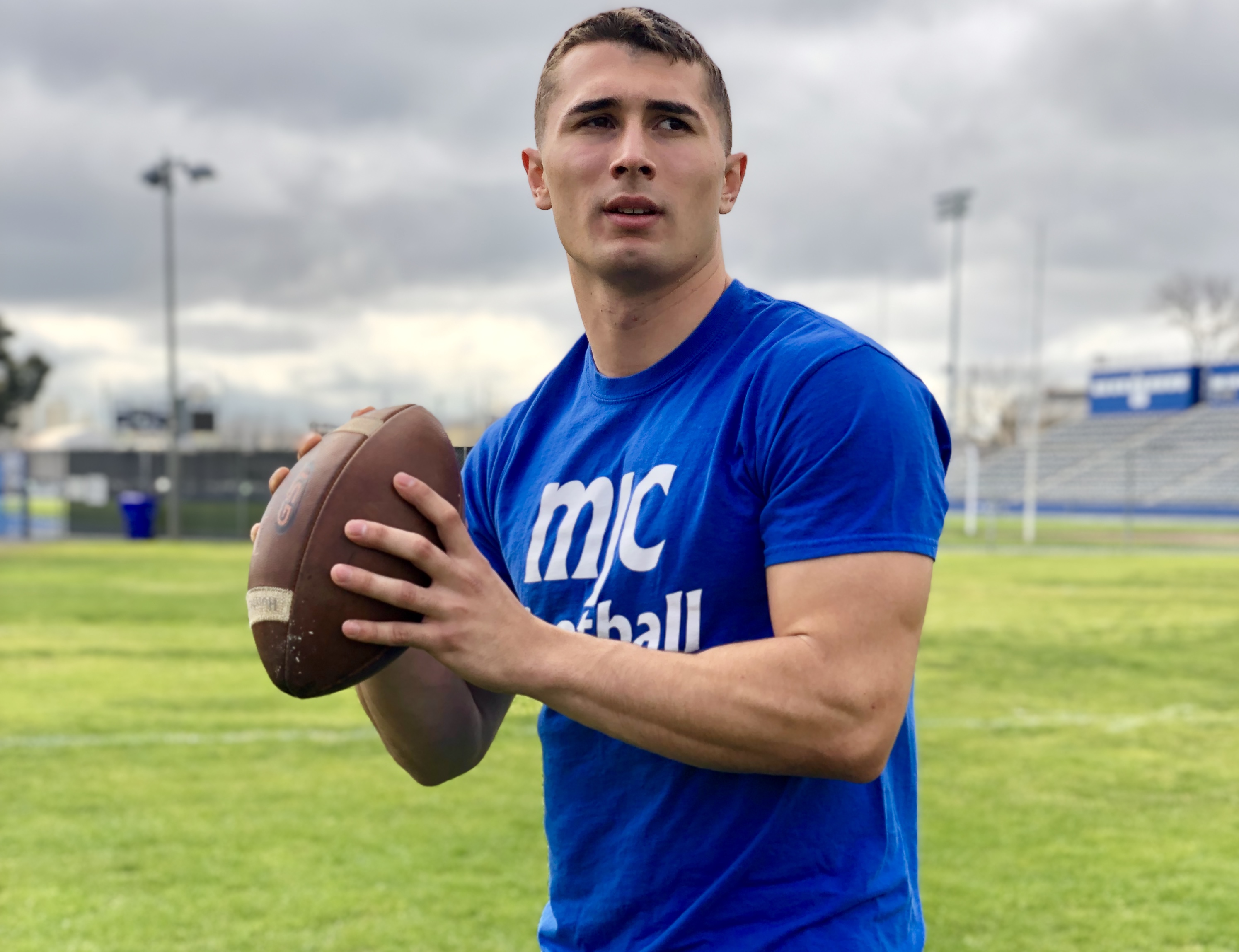 Danny Velasquez reaches back, pursing his lips and brow as he uncorks one spiral after another down the sideline at Modesto Junior College.

Throwing under gray skies, the former Turlock High graduate can’t help but feel like he’s back in the Pacific Northwest, the source of so much frustration, so much confusion, and so many dark clouds.

“This kind of feels like Portland,” Velasquez says as receiver Carter Williams, a product of Beyer and Manteca high schools, latches onto another pass.

When Velasquez left Modesto Junior College for Portland State last summer he was a rising star on the recruiting trail, a dual-threat quarterback with grades, a unique ability to lead a locker room and a freakish set of skills.

In less than a full season under center for the Pirates, Velasquez was named to the all-Big 8 first team and earned game MVP honors in Modesto’s Gridiron Bowl win over Diablo Valley College. His goal, like that of teammate and good friend Mustafa Noel-Johnson, now an impact defensive lineman at Colorado, was to leave after just one year at the junior college level.

While the move has worked for Noel-Johnson, Velasquez has become a cautionary tale for football players coming through the junior college system.

Choose your next step wisely.

“Make sure you take all your visits. Make sure you do your research and ask the right questions. Use me as an example of what not to do, and learn from it,” said Velasquez, who accumulated 2,760 yards of total offense and produced 28 TDs, including 10 through the air as a freshman in Rusty Stivers’ NASCAR offense.

“I’ve already been helping kids on this team (MJC) and the high schools in the area, just trying to help them steer the right path.”

Velasquez pounced on Portland State’s offer, ignoring the advice of Stivers, who implored his freshman quarterback to be patient. Velasquez struggled to acclimate to the weather in Portland. He missed his family, and had trouble building relationships and winning the trust of the coaching staff.

“I rushed it,” he said of his decision.

Said Stivers: “What I tell all my guys, it’s an emotional high when you’re on a visit. Make your decision a couple of days after you come home and have let it settle in.”

The Division I experience he dreamed of had become a nightmare. He appeared in just two games and was eventually moved to free safety, where he injured his throwing shoulder and suffered a concussion.

Velasquez lost about 20 pounds, and worse yet, the fire that made him one of the Central Valley’s top young talents had been snuffed out. At Turlock High, Velasquez led the Bulldogs to back-to-back Central California Conference championships, earning league MVP awards at two different positions. He was the player of the game at the Lions All-Star Football Classic after leading the South to a come-from-behind win.

“It was an eye-opening experience. I didn’t think anything like that would happen,” he said of his personal struggles at Portland State, “but you have to go through things like this. It’s part of life. I’m thankful it happened, thankful I got the experience and now I’m ready to roll and keep it going.”

Velasquez has returned home with the hopes of rebooting his football career. He has re-enrolled at Modesto Junior College and plans to play in the fall.

Stivers says bounce-backs are common in college football, but rarely does a Division-I quarterback return to the junior college he once played for. Velasquez was granted a redshirt for the 2018 season, per the NCAA’s new Division I redshirt rule, Stivers said, but is still awaiting clearance from the California Community College Athletic Association, the state's governing body.

“Any time your in college football and you have a quarterback coming back with experience, especially at the JC level, that’s big bonus,” said Stivers, who has produced five QBs with Division I experience in the last 10 years. “You just can’t teach game experience.”

The Pirates have two other quarterback on the spring roster — Downey’s Brett Neves and Oakdale’s Adam Olson. Turlock’s Jonah Kosakiewicz and Pacheco’s Marcus Ordunez are also expected to enroll after high school graduation.

The competition is wide open, Stivers says, after incumbent Jack Weaver (East Union) decided to forgo his sophomore season to focus on school. Weaver guided the Pirates to an eight-win season in the fall, including a victory over San Francisco City College in the Golden State Bowl.

Velasquez chose MJC for its familiarity and comfort, hoping the springboard still bounces in his favor.

“My motivation is to be a league champion and be that coach on the field and be the leader I know I can be,” Velasquez said. “I want to go to the state playoff and win a state championship. Helping get my teammates out and learn from the experiences I went through. It’s always good to see people leave.

“For me, personally, awards are great and everything, but I don’t care about any of that. All I care about are wins … and obviously getting out of here with another scholarship would be great, too, but I’m taking it one step at a time.”