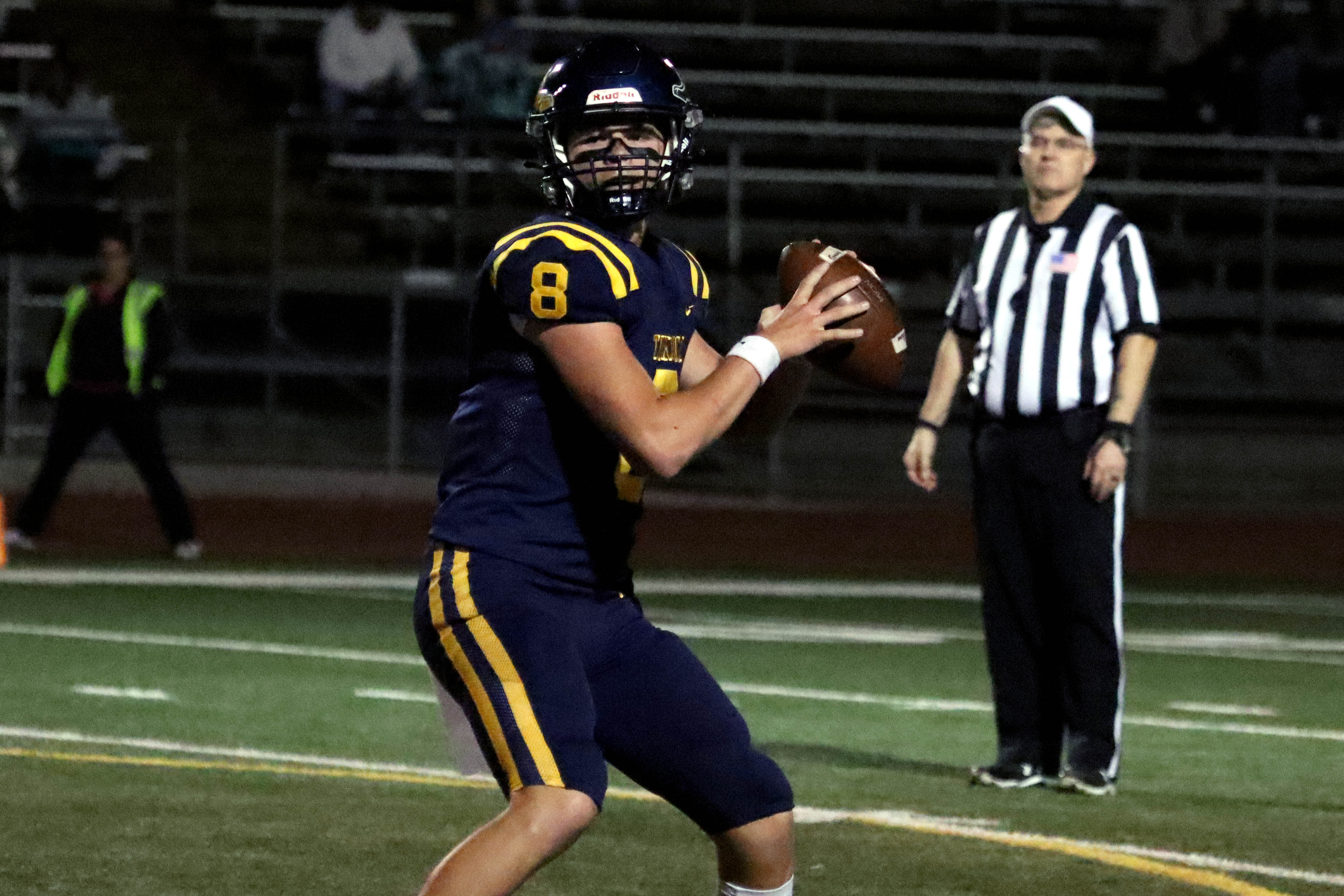 Three year varsity quarterback Cole Gilbert lines up a pass during a game against Gregori.

Quarterback Cole Gilbert and the Turlock High Bulldogs awoke last Saturday morning to a new world. In 24 hours, they had risen from “just another good team” to “THE TEAM” in California.

“Didn’t get too much sleep,” Gilbert admitted. “To get up in the morning, it was very enjoyable.”

The night before, Turlock turned in what was correctly called the upset of the year up and down the state. Its seismic and transformative 51-50 victory over previously unbeaten St. Mary’s, always elite and armed this season with a win over De La Salle, was labeled the “upset of the century” by the Turlock Journal.

Those words are teeming with hyperbole, of course, but football has been played at Turlock High since 1920. The Bulldogs have trotted out great teams in the past but never collected a win that registered with such force on prep football’s Richter scale.

And there was Gilbert, the third-year quarterback moments after the game of his life, holding a sign reading “Why not us?”

Veteran coach James Peterson played it safe, calling it “the biggest win in the school’s modern era” according to Cal-Hi Sports. Cal-Hi selected Gilbert as its Northern California Multi-Purpose/Special Teams Player of the Week.

The win carries more weight than its reward – a berth in the Sac-Joaquin Section Division I semifinals Friday night at Oak Ridge of El Dorado Hills. Closer to the truth, the game – nearly a four-hour melodrama -- already has become a stand-alone classic, one that trumps all brackets and seedings. And that’s saying a lot for a program that hasn’t captured a blue banner in football. Friday night will mark its first semifinals appearance since 2002.

Turlock’s success in Stockton rotated around Gilbert, a sturdy 6-foot-2 and 200 pounds, who figured to be good this season. But no one expected his Wall Street numbers against the mighty Rams. He passed for four touchdowns, rushed for two TDs, caught one TD pass, and tacked on two two-point conversions. He had a hand in 46 of the Bulldogs 51 points and accounted for 492 yards of offense.

“It’s an honor to share that big of a win with my seniors,” he said. “To beat a powerhouse like St. Mary’s was big for the Turlock High program.”

Turlock’s aggression, coupled with the boldness of its game plan, resonated from start to finish. The Bulldogs jumped to a 19-7 lead, parried every thrust by the Rams and eventually walked through an open door in the final minutes.

St. Mary’s, leading 50-43, barely missed  a 37-yard field goal that would have all but closed out the Bulldogs with 3:47 left. Gilbert responded, leading Turlock on an 80-yard march that pulled the Bulldogs to within 50-49 with 1:11 to go on Gilbert’s 24-yard strike to Peter Mello.

Here’s when Turlock’s confidence really showed. Peterson left his offense on the field and went for the lead. The Bulldogs aligned in a kick formation, then shifted to attack mode with one imaginative wrinkle – receiver Andrew Johnson positioned as an eligible tackle.

Gilbert took the shotgun snap, drew the defense with one step forward then jumped – yes, an old-school jump pass – to find Johnson beyond the coverage. Tim Tebow won a Heisman Trophy with such audacity at Florida, but all Peterson could remember was Paul Larson, the quarterback of the unbeaten Bulldogs of 1948 and ’49. Larson eventually went on to earn All-American honors at Cal.  He passed away two weeks ago at age 90.

“I’m sure Paul was smiling on that one,” Peterson said.

The decisive conversion was Turlock’s fourth successful gadget play of the game. The Bulldogs also executed a double-reverse pass back to Gilbert for a conversion, and two other big plays involving backup quarterback Vincent Gonzales. The Bulldogs ran none of the four during the season but practiced them with some added intensity last week.

Yes, the Bulldogs checked a lot of boxes, but which major-upset winner doesn’t?

The win contained personal meaning for Gilbert, who played only four games as a junior due to a meniscus injury (which later required surgery)  and a bout with COVID.

His development as a senior was helped along by first-year offense coordinator Danny Velasquez, a productive and dynamic Turlock quarterback less than a decade ago. He continued his playing career at Modesto Junior College and Fresno State before he brought his expertise back home.

Gilbert’s progress was partially slow-played during difficult non-league losses and a heartbreaking setback on the game’s final play to Central California Athletic League champion Downey. He shined, however, in Turlock’s 35-0 first-round rout over Edison.

What he did last week only cast more attention to his season-long statistics: 2,636 passing yards, 27 touchdowns and only three interceptions, 651 rushing yards and nine touchdowns. Velasquez, calling the plays, pushed Gilbert on each Friday night snap and mid-week rep.

“He (Velasquez) is a tough coach and pushed me toward perfection,” Gilbert said.

Peterson, responsible for one of the area’s sleeper coach promotions, agreed.

“Danny is still a young guy who remembers how it feels to play. He’s been a good mentor to Cole,” Peterson said. “He and Cole were locked in against St. Mary’s. Cole has come such a long way. He’s able to do so many things now. He’s like water  -- no highs or lows.”

Turlock (8-4), the No. 7 seed, now approaches a nearly impossible task – topping itself against third-seeded Oak Ridge (9-2). The Bulldogs opened last August with a 14-7 win over Rocklin, which joined Oak Ridge and others in a futile chase of Folsom in the Sierra Foothill League. It suggests Turlock won’t be out-classed.

Then again, all things are possible. Turlock and its relentless quarterback showed us last week.