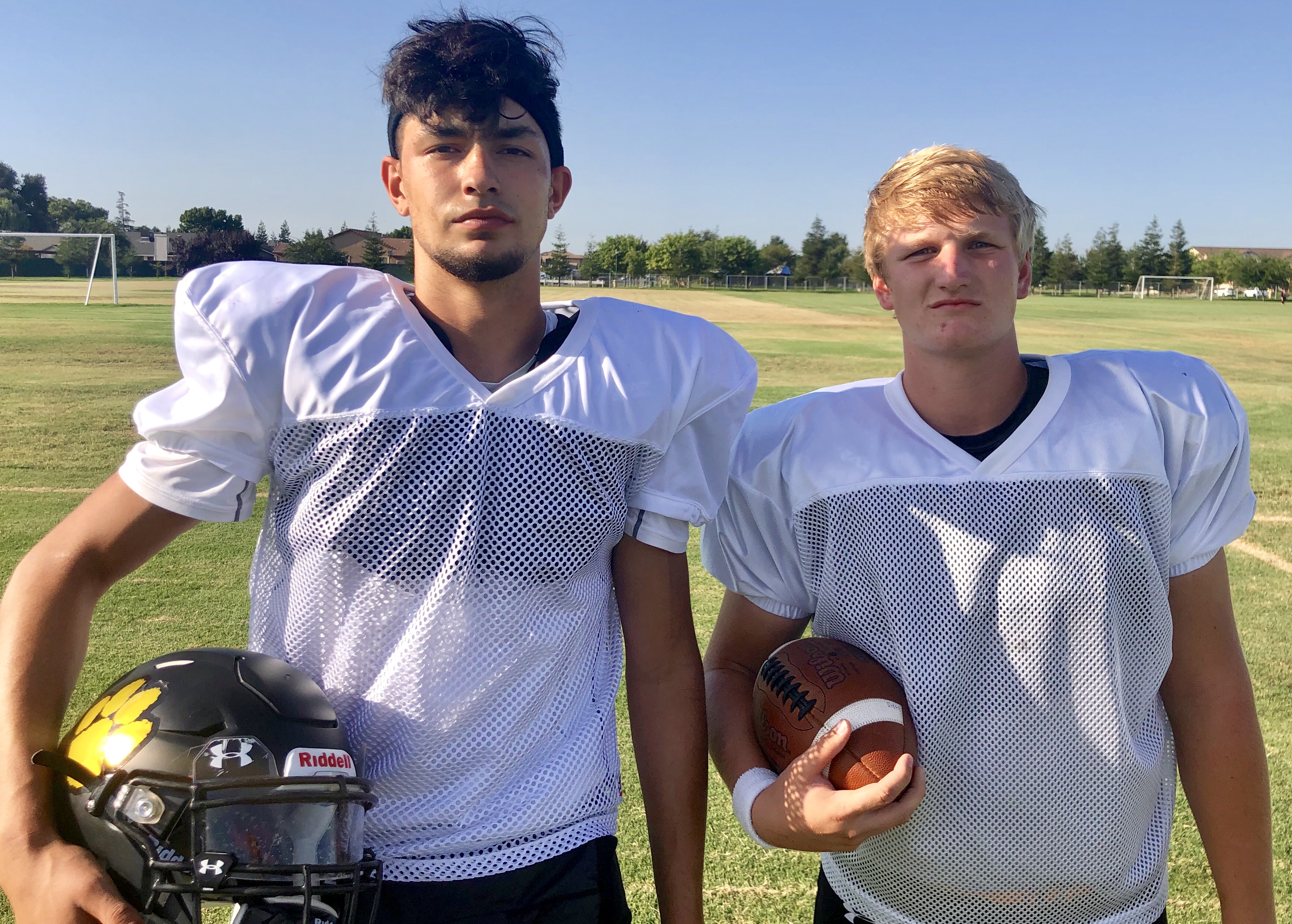 Hughson's Steven Morris (left) and Aiden Meyer were the catalyst's in the Huskies' season-opening victory at Stagg High of Stockton on Aug. 23, 2019.

Big gains for small school: Huskies a giant killer, but can they contend in TVL?

1. (1) Escalon (1-0): Kaden Christiansen showed his versatility in a 58-0 win over Union Mine, scoring three touchdowns while racking up 111 all-purpose yards. With touted junior Ty Harris under center, the historically run-heavy Cougars struck a balance: 126 yards and two touchdowns through the air; four rushing touchdowns and a 6.5 yards-per-carry average. Friday: at Calaveras.

2. (2) Ripon (1-0): The small-but-mighty Indians didn’t waste any time in their opener, scoring four times in the first eight minutes in a runaway victory over Weston Ranch. Ripon scored the first 36 points, including two touchdowns apiece by Danny Hernandez and Brandon Rainer. Friday: vs. Sonora.

3. (3) Hilmar (1-0): Cole Bailey scored two touchdowns -- one rushing, one receiving -- and intercepted a pass as the Yellowjackets thumped Delhi on opening night. Junior quarterback Seth Miguel was explosive in his first varsity start, completing five of his six throws for 156 yards and two TDs. Friday: vs. Los Banos.

4. (5) Amador (0-0): The Buffaloes are a chic pick to knock off five-time defending MLL champion Sonora. Amador graduated only 10 seniors from a 50-man roster that won eight games and qualified for the postseason. There’s also this: the Buffaloes’ junior varsity team went 10-0 in 2018. Friday: vs. Orland.

5. (6) Calaveras (0-0): Calaveras ushers in a new era as longtime assistant Doug Clark takes over for former coach Jason Weatherby, but he’ll be surrounded by a cast of familiar names, including two-way all-conference standout Donovin Giangregorio. Calaveras has been Sonora’s chief threat since the Wildcats were realigned into the MLL. Is this the season someone besides Sonora becomes the toast of the foothills? Friday: vs. Escalon.

6. (9) Hughson (1-0): The Huskies defeated Stagg, a large-school opponent, for the second year in a row, and this time it wasn’t close. Junior Aiden Meyer had touchdown passes to Zander De La Cruz and Steven Morris in a 28-14 road win. Morris also had an interception. Friday: vs. Orestimba.

9. (7) Sonora (0-1): The Wildcats kept pace with Oakdale for a quarter, but then it was all over in a flash. Sonora surrendered 34 unanswered points in the second quarter. The Wildcats have lost three consecutive games to its ancient rival and 13 of the last 14. Friday: at Ripon.