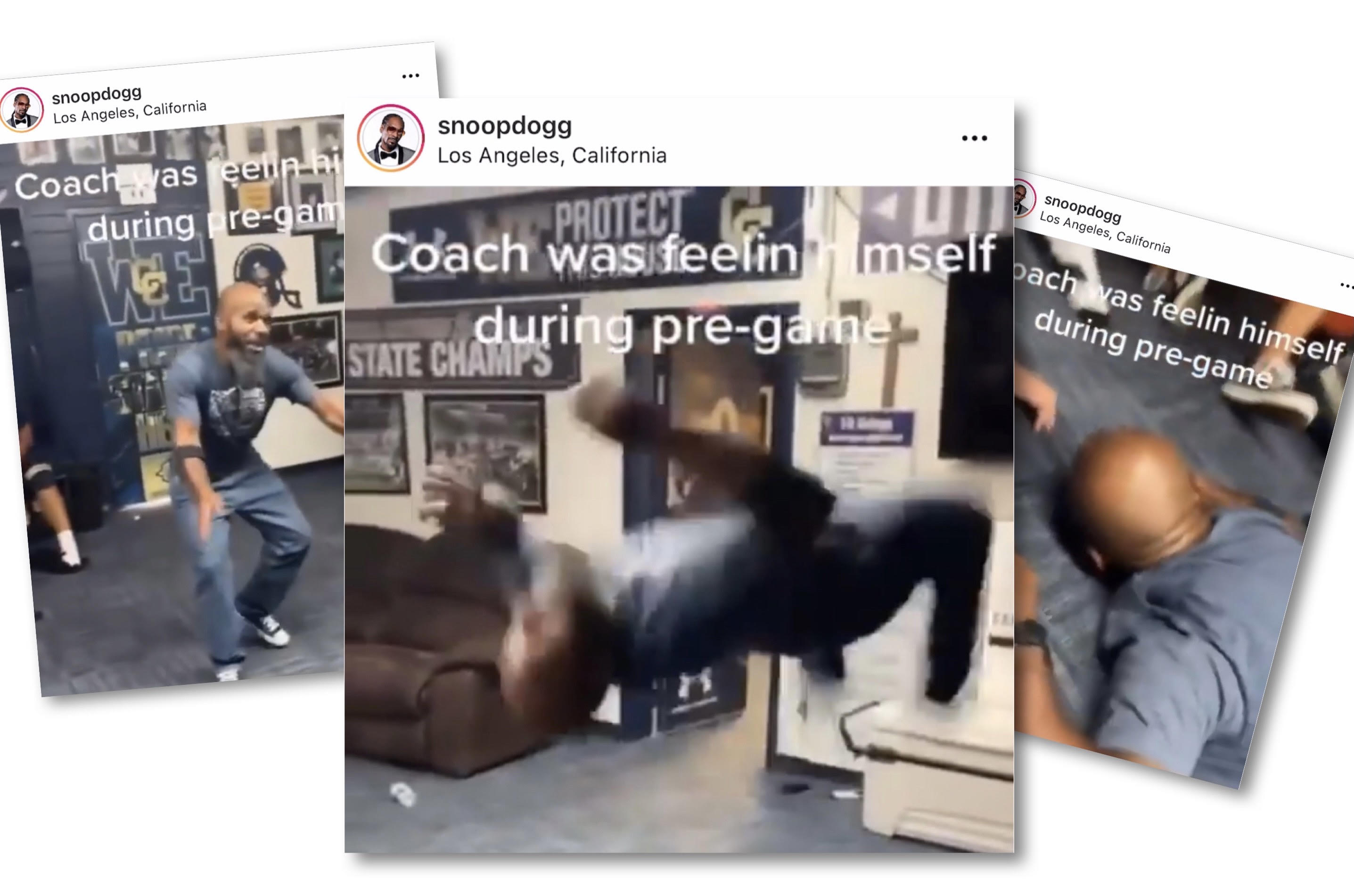 The Raiders are a four-time CIF State champion and perennial league title contender, while the Cougars have been stuck in neutral for nearly all of its existence.

Though the game didn’t command much attention, the Raiders did go viral, creating quite the ripple on social media thanks to a legendary West Coast rapper.

Footage of a father-son dance battle in Central Catholic’s locker room was shared on Instagram by Snoop Dogg. As of Tuesday evening, more than 3.6 million people had viewed the video on Instagram. The short video captures wide receiver/defensive back Elijah Robinson and his father, former assistant coach and San Jose State Hall-of-Fame running back Deonce Whitaker, during a candid moment before Friday’s game.

Robinson starts the dance battle with a back flip in the center of the room and then gives way to Whitaker, who slips on shades and looks to match Taylor’s stunt.

Whitaker gets points for style and effort, but nothing for the landing. Whitaker only made it three-quarters of the way around before landing face first on the floor. (Thankfully, his glasses flew off while he was turning in the air.)  Like a boxer KO’d in the middle of the ring, CC football players playfully counted him out.

Whitaker is fine, and so are the Raiders, currently No. 2 in the regional power rankings heading into a clash with No. 5 Oakdale.

2. (2) Central Catholic (4-1, 1-0): The Raiders opened VOL play with a 51-0 win over Weston Ranch, which trailed 35-0 before the first quarter was over. Sophomore quarterback Tyler Wentworth was 5-of-7 for 122 yards and three touchdowns as Central Catholic attacked the Cougars' through the air.‍

3. (4) Turlock (1-4, 0-0): The Bulldogs were idle, a timely bye after a rough start to the season and Harvest Bowl rival Pitman awaiting them in their league opener.‍

4. (5) Downey (5-1, 1-0): Quarterback Connor Stoddard was 16-of-25 for 215 yards, leading a balanced attack for the Knights in a narrow win over Lincoln, a Stockton power who fields D-I talent. This win confirms Downey’s place among the top programs in the Front Row region. The Knights open the Central California Athletic League at home against Modesto. “We have been a young team that has matured very quickly,” coach Jeremy Plaa said. “Manteca was a wake-up call for us — something that needed to happen to force improvement.  Our big wins over Merced and Lincoln are evidence that our team is growing up.”‍

5. (3) Oakdale (4-1, 1-1): Trailing 19-6 at the intermission, Oakdale and Kimball traded scores down the stretch in an offensive shootout. Ultimately, the Mustangs had no answer for the Jaguars' third-year varsity quarterback, Nicholas Coronado, who threw for more than 500 yards and seven touchdowns. Does the loss change the complexion of this week's rivalry game with Central Catholic at The Corral? Probably not.‍

1. (2) Escalon (4-1, 1-0): The Cougars were idle last week. Instead, many made the trip to Ripon High School to scout the Indians and the Yellowjackets in their TVL tussle, a 7-3 victory in favor of Ripon.‍

2.  (nr) Ripon (3-2, 2-0): Healthy for the first time all season, Ripon silenced one of the top offenses in the region and knocked Hilmar from the ranks of the unbeaten and the top spot in this poll. Ethan Day and Nolan Young were the catalysts, defensively, and Caleb Johnston scored the game's only touchdown.‍

3. (1) Hilmar (5-1, 1-1): After playing with fire in come-from-behind victories against Sonora and Livingston, the Yellowjackets were finally burned for their slow start. Hilmar was stopped at the goal line as the first half expired and then committed to turnovers in the second half of a 7-3 loss at Ripon.‍

4. (5) Livingston (4-2, 1-1): The Wolves are the real deal after pounding Hughson 27-0 and very nearly beating Hilmar one week earlier. Armed with one of the top quarterbacks in the region, senior Rocklin Baptista, Livingston is a dark horse in the TVL title chase. Baptista accounted for 287 yards of offense and was 13-of-19 passing the rout of Hughson, which fell out of the Top 5 with the loss.‍

T-5. (4) Waterford (5-0, 1-0): The Wildcats have scored 30 or more points in each of its five games, including Friday's 49-33 victory over Le Grand, but it's not the scoring that concerns coach Adam Hilton. He wants to see more consistency and sustained effort, especially as his team prepares for Ripon Christian. Waterford led Le Grand 35-13 at the break, but watched the Bulldogs claw within 11 in the second half. "Always good to get a league win," Hilton said, "but at some point this team needs to learn how to play four quarters."‍

T-5. (5) Sonora (2-3, 0-0): The Wildcats found themselves without a dance partner on Friday evening when Stellar Prep canceled. Sonora made the most of its time, though, scouting a Mother Lode League opponent.