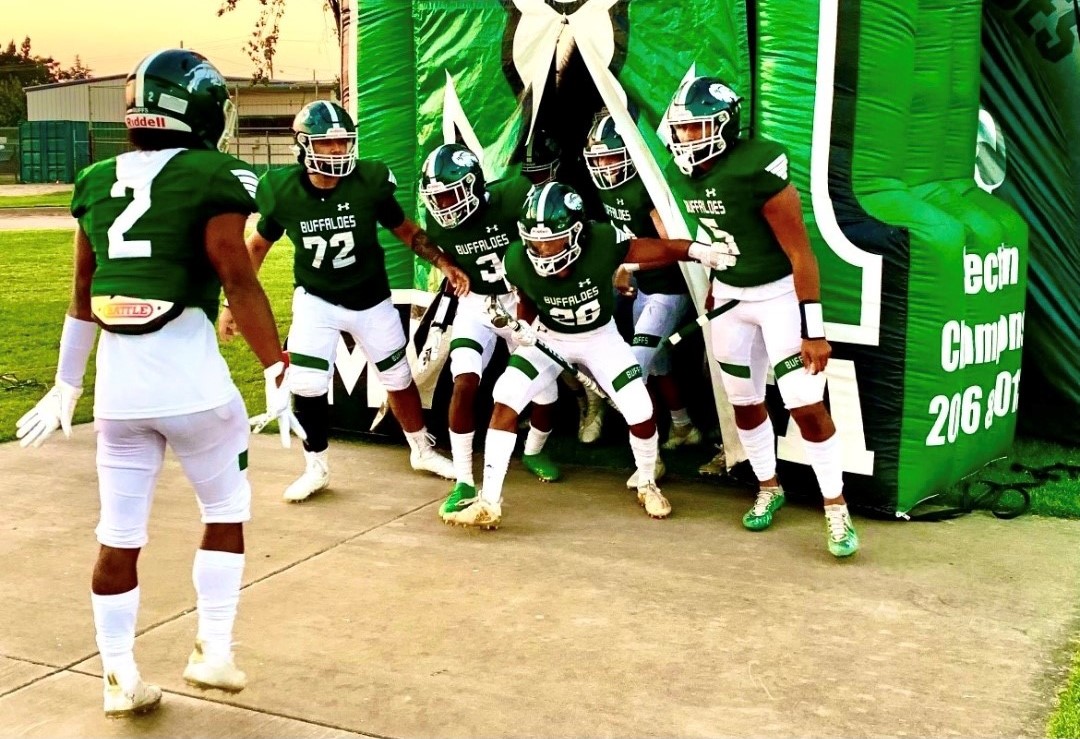 Manteca has beaten two top-ranked teams to surge to the top of the FrontRowPreps.com Regional Large-School Power Rankings. (Photo contributed)

Gone for 18 months and save for the names on the roster, nothing has changed.

The teams atop the region are a familiar cast of heavyweights and world-beaters. The Valley Oak League's resident kings -- Central Catholic, Manteca and Oakdale, in alphabetical order -- continue their decade-long struggle for supremacy in the region's top conference. Meanwhile, at the small-school level, Hilmar and Escalon remain on schedule for their annual collision in the tall grasses of the Trans-Valley League.

Gone for 18 months, and now we're back. And we bear gifts, or fuel for your fire. Without further ado, FrontRowPreps.com debuts its regional power rankings. We look forward to learning more about each program, the players and coaches who make them go, and the communities that power those Friday night lights.

1. Manteca (5-0, 1-0): The Buffaloes debut at No. 1 after a dominating start to the VOL season. Manteca's high-powered offense scored four touchdowns on four plays in the second quarter and led crosstown rival and former CIF state champion Sierra 57-0 at the intermission. The Buffaloes attack with fast-rising Division I prospect Blake Nichelson, a Central Catholic transfer who many have compared to former prep dynamo Justin Rice of Central Catholic.

‍2. Central Catholic (3-1, 0-0): Senior Aiden Taylor has been Central Catholic's workhorse, averaging 120 rushing yards per game and scoring 10 total touchdowns. The Raiders own one of the season's most impressive wins -- a 41-27 victory over Holy Bowl rival St. Mary's. Central Catholic suffered its first loss of the season on Friday at Bellarmine Prep, another parochial power, and will launch into VOL play at Weston Ranch. A showdown with Oakdale looms.

3. Oakdale (4-0, 1-0): The Mustangs' Wing-T offense exploded for 59 points in a league-opening romp over East Union, which looked vastly improved under first-year coach Mike Kuhnlenz. “We came out flat and when you come out like that against a quality opponent in Oakdale, they make you pay,” Kuhnlenz told The Stockton Record afterwards. “They made us pay over and over again.” Oakdale has the weapons to turn this poll -- and the VOL -- on its head, and it will get the chance over the next two weeks against unbeaten Kimball (Friday) and Central Catholic.

4. Turlock (1-4, 0-0): The Bulldogs snapped a four-game losing streak with a home win at Clovis West, a perennial Central Section juggernaut. Turlock had two players top 100 yards on the ground, including JT Foreman who rumbled for a game-high 211 yards. The Bulldogs have a bye this week and look forward to a Harvest Bowl showdown with crosstown rival Pitman Oct. 1.

T-5. Downey (3-1, 1-0): The Knights were thumped in a season-opening tussle with top-ranked Manteca, but they've won three straight by at least two scores, including victories over Merced and Buhach Colony. Downey closes the non-league portion of its schedule on Friday against visiting Lincoln of Stockton before launching into Central California Athletic League play.

‍T-5. Merced (3-2, 1-0): Led by a Scheidt on the sideline (Rob) and another under center (Seth), Merced blitzed Atwater in its Central California Conference opener and have won two straight since its loss to Downey. Merced climbs into a tie with Downey, despite its loss to the Knights, because of its rivalry victories against Madera and Atwater in back-to-back weeks and a narrow three-point loss to No. 2 Central Catholic in their season opener.

1. Hilmar (5-0, 1-0): The Yellowjackets overcame a 17-point deficit to Livingston in their TVL opener to keep a dream start to the season alive. Before last week's turbulence, Hilmar topped three consecutive large-school opponents -- Patterson, Los Banos and Modesto, each a regular in the Sac-Joaquin Section postseason. Hilmar also edged Sonora, king of the Mother Lode. Senior quarterback Camron Moak has passed for 835 yards and 12 touchdowns.

2. Escalon (4-1, 1-0): The Cougars rebounded from a tough loss to large-school unbeaten Kimball with a come-from-behind victory at Hughson. The loss was the first of the season for the Huskies. Escalon is led by an all-out ground attack. Four players have rushed for more than 150 yards, including Logan Anderson who paces the Cougars with 358 yards and a gaudy 9.9 yards per carry. Escalon will use its bye this week to prepare for Hilmar Oct. 1.

3.  Hughson (4-1, 0-1): The Huskies rocketed out to a 13-0 lead on Escalon in their TVL opener, but surrendered 21 unanswered points in the loss. The Huskies travel to Livingston this week in what amounts to a loser-leaves-town game in the TVL. If Hughson hopes to stay in the title race, it will need a bounce-back victory against the Wolves, who put a serious scare into one of the TVL's Big Three last week.

4. Waterford (4-0, 0-0): After a strong spring showing, Waterford hasn't shown any signs of slowing down. Led by the Hiltons -- coach Adam Hilton and his sons, senior Ryan (team-best 475 rushing yards) and junior Caleb (six rushing TDs, 8.8 tackles per game) -- the Wildcats have reeled off four straight wins to start the season. They may be the favorite in the Southern League, but these next two weeks are telling: Friday vs. Le Grand; and Oct. 1 at Ripon Christian.

T-5. Sonora (2-3, 0-0): Each year, the Wildcats prepare for the Mother Lode with a thorny non-league schedule, and look at the scratches and sticks. Sonora snapped a two-game losing streak (to Hilmar and Escalon) with a 49-0 drubbing of West. The Wildcats' record is misleading. After a one-sided loss to Oakdale to open the season, Sonora fell short to Hilmar and Escalon, the top-two teams in this poll, by one score.

T-5. Livingston (3-2, 0-1): These Wolves have got some bite. Led by senior quarterback Rocklin Baptista, Livingston pressed top-ranked Hilmar in their league-opener last week. Prior to the COVID-shortened season, Baptista was one of the region's up-and-coming small-school quarterbacks. He passed for nearly 2,000 yards and 24 touchdowns as a sophomore in 2019.