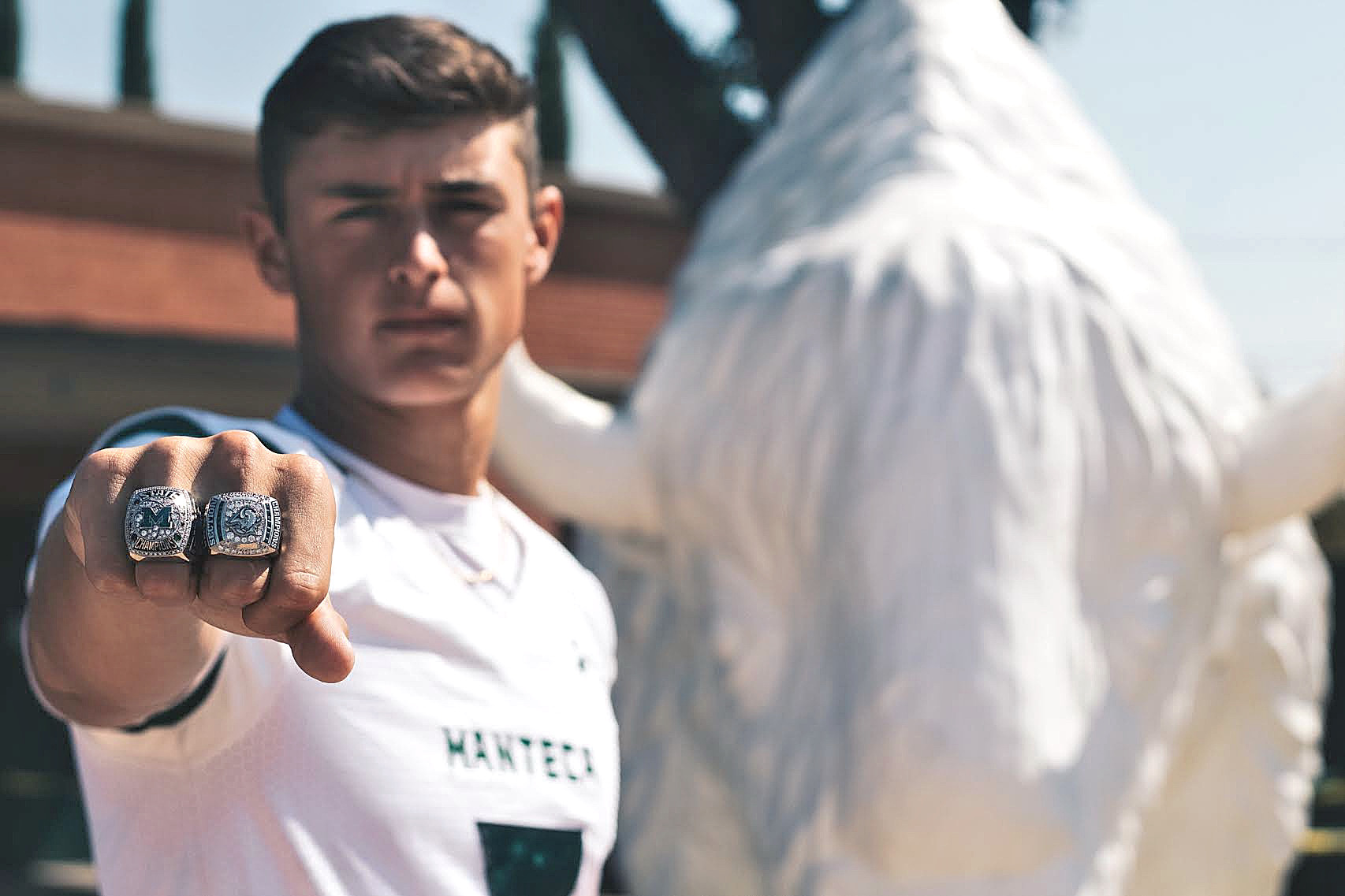 Former Manteca High quarterback and Valley Oak League MVP Gino Campiotti leaves some big shoes to fill, but the Buffaloes have more than one successor in mind. (Angel Chea)

Gino Campiotti checked every box during a scintillating senior season at Manteca High.

He was named the Valley Oak League’s MVP, the Cal-Hi Sports Division III State Athlete of the Year, and turned heads on the recruiting trail, signing with Northern Arizona University.

Along the way, he rewrote nearly every passing record at a school that has produced good ones, too, including Sammy Miller, who played baseball at Nevada; Ruben Cedano, who engineered back-to-back section championships in the aughts; and Joe Menzel, who led the Buffaloes to their first NorCal bowl appearance.

Campiotti is the new standard, which makes this summer an intriguing one for Manteca. Not only are the Buffaloes adjusting to a new coach — former offensive coordinator Mark Varnum replaces Eric Reis — but they’ve got to find a quarterback.

There are two in camp: sophomore Ryan Ward and junior Jorge Cedano. Each enjoyed considerable success as two-year starters at the frosh-soph level.

“Obviously, there are huge, huge shoes to fill with Gino, but with both of them, they have that swagger,” Varnum said. “It doesn’t faze them at all.

“Just because the faces change, the expectations don’t,” he added. “They want to be the first team in program history to three-peat. They know there is a huge task in front of them. It’s next man up, next team up. I don’t think the pressure will affect them. We’ll see come the fall, but as of now, their eyes are on the prize.”

Ward has a slight edge in the quarterback competition, Varnum says, but that has more to do with Cedano’s versatility than Ward’s ability.

The 6-foot-1 Cedano blossomed into Campiotti’s favorite down-field target. He had 48 catches for 631 yards and six touchdowns and was virtually unguardable in the postseason. In the Division III final against Oakdale, Cedano had five catches for 67 yards and two touchdowns.

One week later, he had a season-high nine receptions for 88 yards in a loss to Saint Francis in the NorCal bowl.

“He developed beyond anyone’s expectations,” Varnum said. “He has the opportunity to be the best in the area when split out there.”

Cedano is the more athletic option. He’s played two full seasons of varsity basketball and as a freshman, joined the Buffaloes on the bench for their CIF State Division III title run.

With his length and athleticism, hands and body control, Varnum believes Cedano could be targeted 12 to 15 times a game by Ward.

“The thing with Jorge, where ever you put him, he’s going to be successful,” Varnum said. “So that’s our job as a coaching staff: Where can we put him, where he’ll help the team the most?”

Ward may not have the athleticism Cedano possesses, but he has big arm. Arizona is recruiting Ward for baseball. As a freshman at the varsity level, Ward ranked among the state leaders in victories. He was 11-1 with a 1.18 ERA.

Varnum is in love with his physical ability, but also raves about Ward’s intangibles. He’s a winner — and he knows it.

“He’s got the swagger and the confidence in his abilities,” Varnum said. “He comes in and he’s pretty unflappable. Even in practice, he’s ready to roll. It’s nice when you don’t have to build up the confidence. He knows he’s a high-level varsity player.”

If Ward has the edge, he has the greatest challenge, as well.

The Buffaloes will be stocked with offensive weapons in the fall. Running back Trabron Russell (96 carries, 825 yards, 16 TDs) has added 10 points to his frame, signaling that he’s ready to be an every-down back.

Cedano would need to be a focal point, though. The clock is ticking. Varnum would like to name a starter before the team begins its 7-on-7 schedule in June.

“He wants the ball,” Varnum said of Cedano. “He wants the spotlight. He showed that in the playoffs. As long as we can get him the ball and make him a big part of what we do, he’ll be happy."