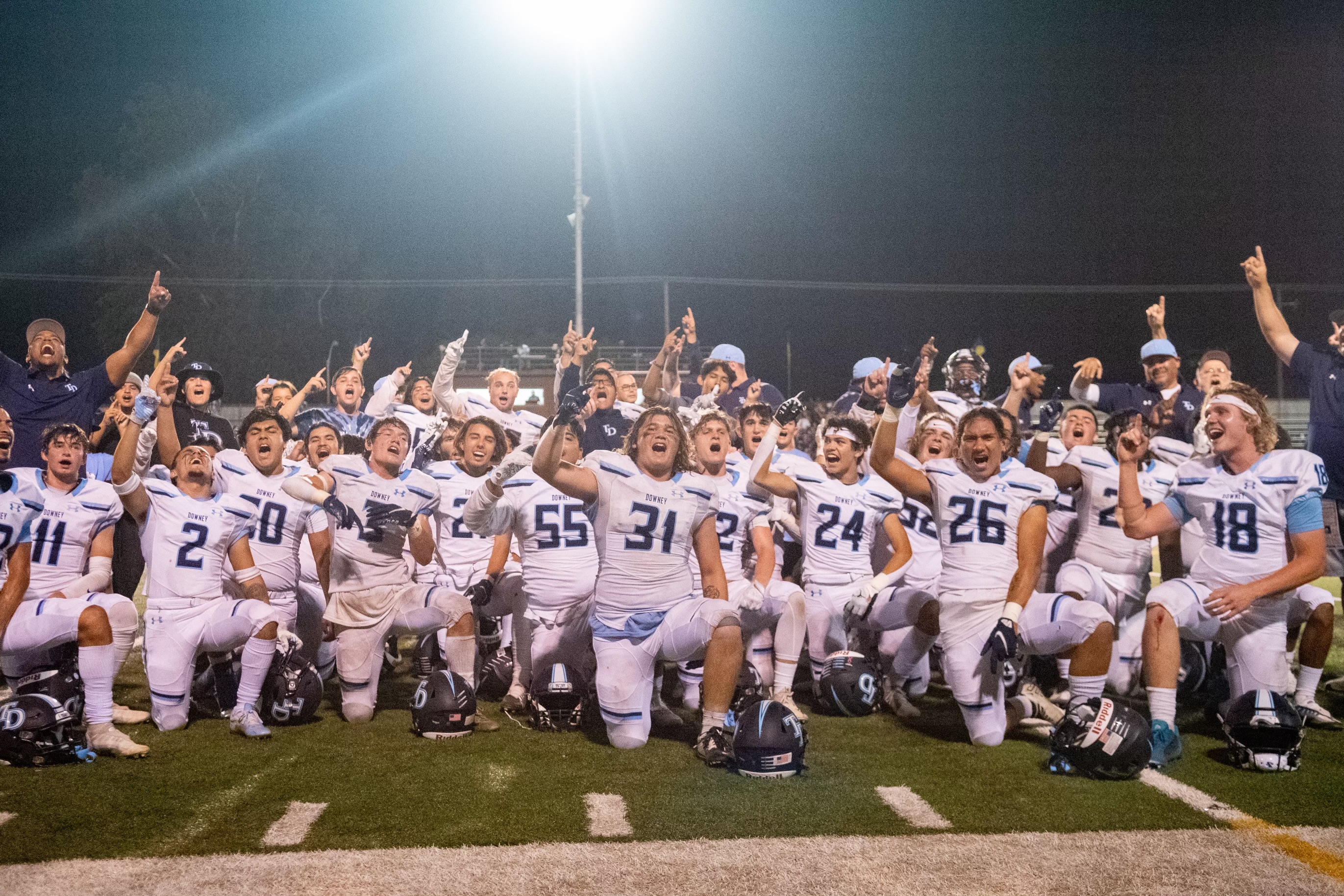 Downey trailed by 14 points on the road at Turlock High on Friday, Oct. 7, 2022, but kept its undefeated season alive with a last-second field goal by Elijah Reyneveld. (Diego Hernandez)

Resiliency on the road: No. 2 Downey stages another come-from-behind win

With 3.3 seconds remaining in the game, every fan in Turlock’s Joe Debely Stadium was on their feet and screaming in support of their team.

The Turlock Bulldogs were ahead by one point. All eyes were on Downey kicker Elijah Reyneveld as the Knights set up for a field goal. The Knights erupted with joy as the ball sailed through the uprights and secured their victory over the Bulldogs 24-22.

In their third come-from-behind win on the road, the Knights fought hard to maintain their undefeated season. “I had nothing but faith in you guys!” said head coach Jeremy Plaa to his team in their post-game huddle.

Reyneveld was feeling “on top of the world” after his successful field goal.

“I missed a kick before, I knew everyone put so much into this and there was no way I was going to fail with everyone behind me like that,” he reflected. “I just calmed my mind and got to that state where I wasn’t going to miss.

Neither team made much progress during the first quarter, but Turlock set the tone in the second quarter.

With three minutes remaining in the first half, Ki Ragland put Downey on the board and kicker Reyneveld scored his first point. They went into half-time with Turlock leading 14-7.

The third quarter started slow with Downey having trouble completing passes and Turlock sending a snap right over their quarterback’s head. With 7 minutes left, Ragland and Reyneveld again came through for the Knights with a touchdown from the four-yard line to tie up the game at 14.

The teams were tit-for-tat the rest of the third quarter and the beginning of the fourth, fighting tooth and nail for each yard. With a minute and a half left in the third, Reyneveld attempted a 48-yard field goal but came up short.

There were 4 minutes and 31 seconds remaining in the game when Downey quarterback Connor Stoddard connected with Gavin Garcia. Garcia caught the pass and bounced off a series of Bulldogs to make it into the endzone.

With Downey pulling into the lead (21-14) for the first time, the energy in the stadium began to ramp up. At the 41-yard line, Turlock’s Gilbert was thwarted three times. On their fourth down, Gilbert desperately searched the field and dodged hits before connecting with running back JT Foreman II for a successful 41-yard pass into the endzone. In a bid to lock up the game, the Bulldogs gambled on a two-point conversion and came out ahead 22-21 with less than two minutes left in the game.

The energy was reaching fever pitch in Joe Debely Stadium as the Knights took over the ball at the 16-yard line. They gained zero yards on their first two plays, but the next two consecutive passes to receiver Gabe Hernandez netted the Knights 50 yards. The Bulldogs tried to wear them down, but the Knights eventually prevailed with their last-second field goal.

Coach Plaa’s pride in his team and staff were evident after the game. “[Our kids] have been working really hard. Our coaches battled throughout the game trying to find a way to pull out the win and they finally did it. They did a great job!” he said. But they won’t be dwelling on this victory too long, “We’re gonna celebrate this one for the next 24 hours, and then it’s on to the next opponent.”

Samantha Schmidt is a freelance photojournalist and reporter, whose work has been featured at FrontRowPreps.com for the last few years.