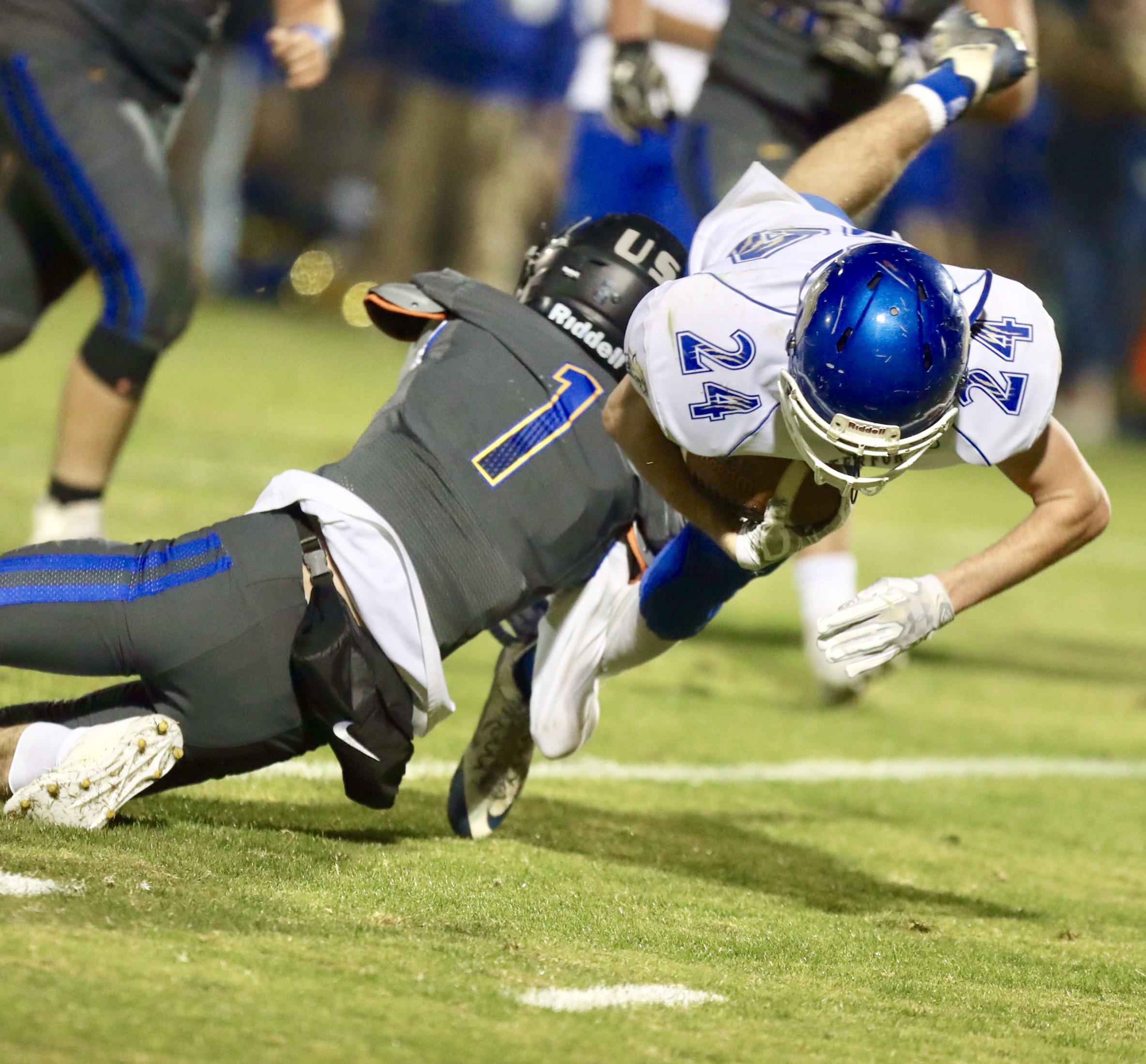 'Building a special program.' Can private school on the rise take down a top seed?

RIPON — As the crowd collected around his football team following a shutout victory in the quarterfinal round, Ripon Christian coach Trey Ozenbaugh tugged on the proverbial balloon.

At 11-0, the Southern League-champion Knights are flying high, dancing along a historic current as they soar into a Sac-Joaquin Section Division VI semifinal date with top-seeded Modesto Christian.

Ripon Christian attacks with one of the top small-school running backs in the region in senior Michael Kamps — “He’d start for anyone in the Trans-Valley League,” Modesto Christian coach Mike Parson says — and then infuriates foes with the section's top scoring defense.

But Ozenbaugh, the Knights’ fifth-year coach, is leery of the balloon flying too high, too soon. In a 28-0 victory over league foe Waterford in the second round, Ozenbaugh saw some struggle, some room for growth and a team still searching for its best effort.

So he gave the balloon a tug.

“We were not perfect tonight,” Ozenabugh said. “We absolutely did enough to get the ‘W.’ I’m proud of you for your effort, but we still have some things to clean up. We did not play our best football. We understand that, right? We’re moving on and we get to play a TVL team. We’re going to see how good we are.”

Modesto Christian (10-1) will be the toughest test yet.

The Crusaders shared the TVL title with Ripon and defeated Argonaut in the second round, 28-7. Xavier Carlton and Johnny Williams had long touchdown receptions for Modesto Christian, which seeks a return to the Division VI final for a second straight season.

Carlton is a national recruit, a big-bodied defensive end and tight end with offers from Notre Dame, USC and Oregon, among others. With soft hands, Carlton completed a 27-yard scoring strike from Hayden Sauser, who punctuated the rout with a 92-yard TD pass to Williams, one of 11 seniors.

It wasn’t a complete victory, though.

Running back/linebacker Isaac Schinmann dressed but didn’t play as he recovers from a shoulder separation. Schinmann, who has 963 total yards of offense, nine touchdowns and two interceptions, is expected to play Friday evening.

Another versatile, do-it-all captain, Jose Hernandez, a wing and safety, left the game with a serious knee injury. All season long, Hernandez and Schinmann have shared communication duties for a defense on par with Ripon Christian’s. Hernandez also handles the team’s kicking duties.

The Knights have given up the fewest points in the section with 58. Modesto Christian is third with 89 points. In a postseason full of amazing offensive shows, could this matchup resemble a baseball game?

Ripon Christian junior Sean McGovern, a takeaway specialist, believes it will come down to the nastiest, stingiest defense.

“It might be low scoring,” said McGovern, who has three interceptions, four fumble recoveries and 86 tackles. “It’s going to be a battle.”

With the program’s first league title in five years and a Division VII section final appearance in 2017, Ripon Christian’s balloon has climbed to new heights. Yet, the burgeoning private-school program remains grounded, mindful of the process and careful of flying too close to the sun.

The Knights want to test themselves against bigger schools and established programs, beginning with Friday's clash with the Crusaders, a former CIF State champion once ranked No. 1 in the FrontRowPreps.com small-school power rankings.

“I don’t know what to expect. I know they’re a great team," he later added. "They got a great coaching staff and unbelievable players. They got a couple of national recruits. We have no one recruited here at Ripon Christian, but we’re going to play our hardest.”