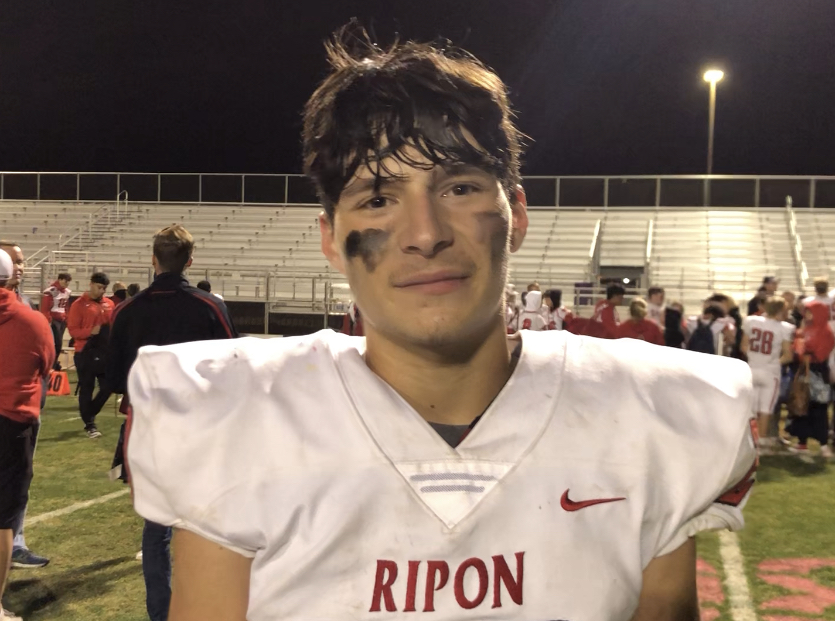 The Indians remained undefeated in the TVL, setting up a showdown with Escalon in two weeks that likely will decide the conference champion.

Nursing a shaky 12-7 lead, Barrera entered late in the third quarter. Starter Dylan DeGraff led the Indians to two scorers in the game’s first 15 minutes before the offense sputtered for next two quarters, squandering numerous opportunities provided by a stingy defense.

“I guess it’s called ‘Thunder and Lightning,’” said Ripon head coach Chris Musseman of the quarterback switch. “They have two different skill sets. Dylan’s a really good manager of the game as far as running that under-center stuff. And Berrera’s more of a spark. He’s a big-play guy.”

DeGraff was intercepted by Flavio Aguilar, who had two picks in a 27-0 win over Hughson on Sept. 24, to give the Wolves the ball on their own 15 with 4:30 left in the third. But Livingston could muster just one first down before being forced to punt.

A wobbly kick was made worse by a 15-yard facemask penalty, and Ripon took over just 38 yards away from paydirt with 1:42 remaining in the third.

A 14-yard run by Jack Manning moved the ball to the 24, but a 15-yard penalty for a blindside-block, followed by a 5-yard false-start infraction made it first-and-30 from the 44.

Berrera scrambled for 7, then completed passes of 15 and 10 yards for a back-breaking third-down conversion. He picked up another first down with two more keepers and a 9-yard completion to Manning that put the ball inches from the goal line. But another personal foul — this time for clipping — made it first-and-goal from the 15.

Berrera picked up 4 on first down then hit Nolan Young on a timing pattern in the corner of the end zone with 8:18 left in the contest.

“Walking up to the line, I saw the corner was about 5-foot-8 and we have our 6-foot-3 wide receiver,” said Barrera. “I was, like, I’m going to give him a chance in the end zone. Pretty simple.”

Berrera then hit Landen Thomas for a two-point conversion that produced the game’s final margin.

Livingston (4-3, 1-2), which had the league bye last week, was well rested and brimming with confidence following the Hughson win. But a 28-24 loss to Hilmar on Sept. 17 left the Wolves’ had no margin for error in the conference race.

Livingston fell behind 12-0 — Manning busted in from 8 yards on the last play of the first quarter and DeGraff hit Ethan Day on a 36-yard scoring strike early in the second stanza — before narrowing the gap on Jordan Alvarez’s 12-yard TD run and Cain Ambriz’s PAT.

The touchdown, coupled with a defensive stand inside the red zone just before halftime, gave the Wolves momentum heading into the break.

“We actually thought, watching film, (Livingston) might be the best team in the TVL,” said Musseman said, who guided Ripon to the 2019 Division 4-AA state championship. “They’re big, they’re athletic … they were very impressive.”

"In the TVL, if you've got penalties and turnovers, it's just not going to go your way," said Livingston head coach Alex Gonzalez, now in his eighth season and looking for his second playoff berth. "The kids battled back, but weird things kept happening ... credit to Ripon's defense."