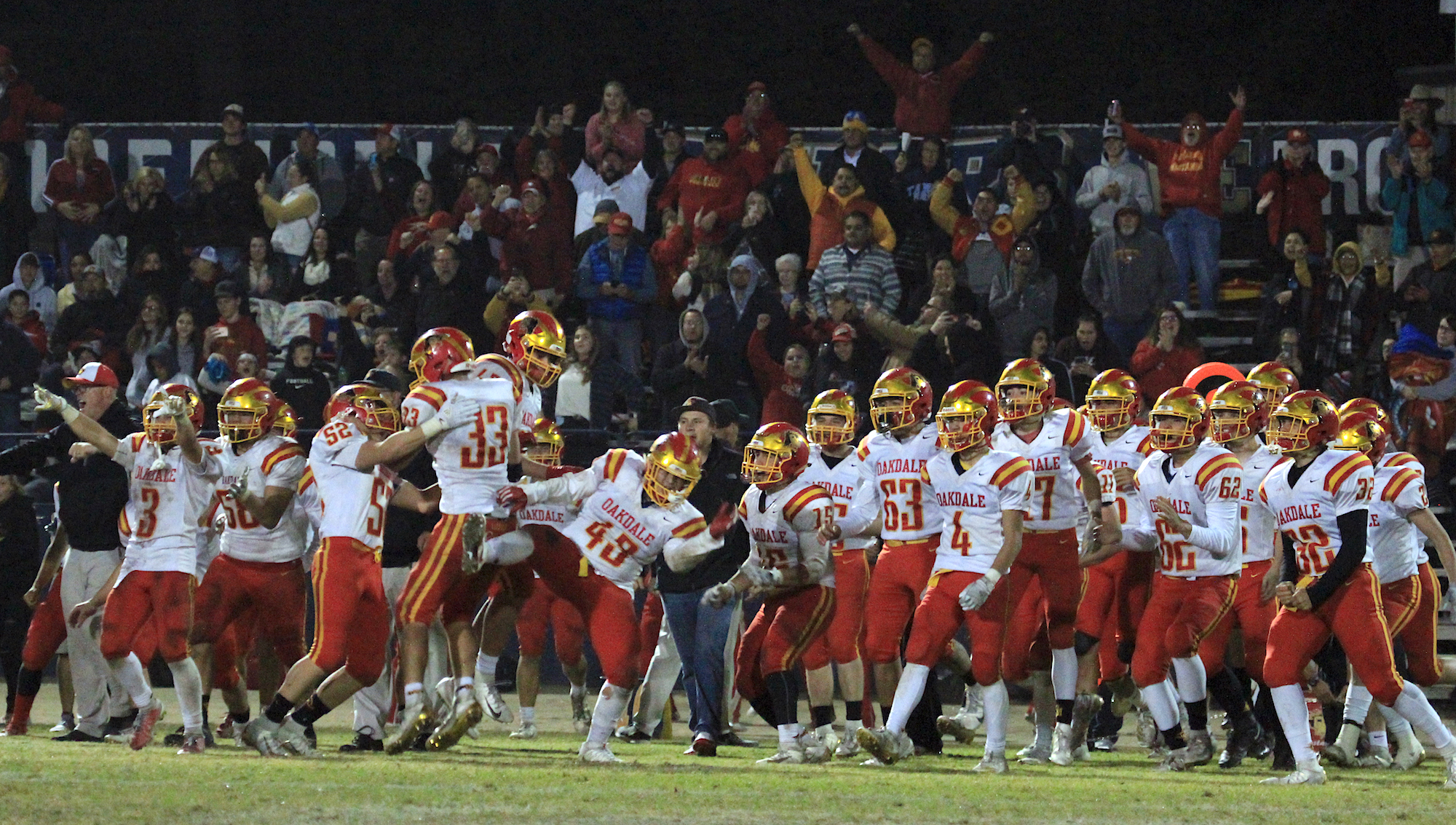 'Risk it for the biscuit': Oakdale creates VOL title share with fourth-down call

While thousands in the stands at David Patton Field played with the scenarios, Oakdale High running back Zeke Saffar looked around the huddle and understood there was really only one option: Go for it.

On the game’s biggest, a pressure-packed moment that carried with it the weight of the Valley Oak League championship and more, the Oakdale football team defied conventional wisdom.

“We had to risk it for the biscuit,” Saffar said with a sly grin.

Positioned at their own 40 with less than two minutes left, sophomore Jackson Holt converted a fourth-and-3, flipping a pass into the flat for Colton Walker and a 42-39 victory over Central Catholic that dramatically altered the postseason picture for the VOL’s Big Three.

“Our seniors are excited. They’ve never won a Valley Oak league championship,” said Saffar, who had two touchdown runs, including an 80-yard gallop. “Today was for the seniors, and the O-line was absolutely amazing. That second touchdown I had was all them.”

By creating a three-way split of the VOL title with Central Catholic (5-5) and Manteca (8-2), Oakdale (7-3) also set the starting positions for each program when the postseason begins next week. By virtue of point differential, Manteca, a Division IV school based on enrollment, is the VOL's No. 1 seed and must be elevated to Division III. Central Catholic, a four-time CIF State champion, has been locked into the Division II playoffs the last three seasons because of its sustained success.

Oakdale, another school with Division IV enrollment, will remain in D-IV, where the Mustangs become an immediate favorite. Saffar insists the playoff ramifications of Friday’s win weren’t part of the pregame narrative. Their focus was on beating the third-ranked Raiders and avenging last season’s 54-14 loss at The Corral.

Oakdale led by as many as 11 and forced three turnovers.

“We just wanted to stay focused on CC,” Saffar said. “We never look forward. We always stay focused on the team we’re playing that week. After that we just get ready for the next one.”

An accomplished sprinter, Saffar’s speed was unmatched. The junior blasted Central Catholic’s hobbled defensive unit for touchdown runs of 55 and 80 yards. The latter came with 34.2 seconds left in the third quarter and pushed Oakdale’s lead to 35-25.

Isaac Valero also found the end zone twice for the Mustangs, while Leo Ayala and Jackson Holt had one touchdown apiece.

Holt helped turn the game’s biggest play with his arm with less than two minutes left. On fourth-and-3, with Central Catholic hoping for one final possession, Oakdale rolled the dice. Instead of punting, the Mustangs seized a share of the VOL title with a play-action pass.

Holt faked the handoff and then tossed into the flat for a small yet significant gain.

Central Catholic had won five consecutive games, but the injury bug that haunted the Raiders in August and September returned. Highly-touted defensive end/tight end Nic Sani did not play with a shoulder injury. Minaya Olivo (cramps) and Sithri Price (shoulder) went the distance despite spending time on the trainer’s table.

In a season of twists and turns, the Raiders will remember the regular-season finale for their red-zone blunders. Central Catholic fumbled while going into the end zone, and then had another drive halted inside the 5-yard line by a blocking penalty.

“It comes down to a few plays,” Central Catholic coach Roger Canepa told him team afterward. “You guys played hard; so did they. (Oakdale) played hard. … We lost because we made a few mistakes. That’s a good football team. When you play good football teams, you have to play mistake-free.”