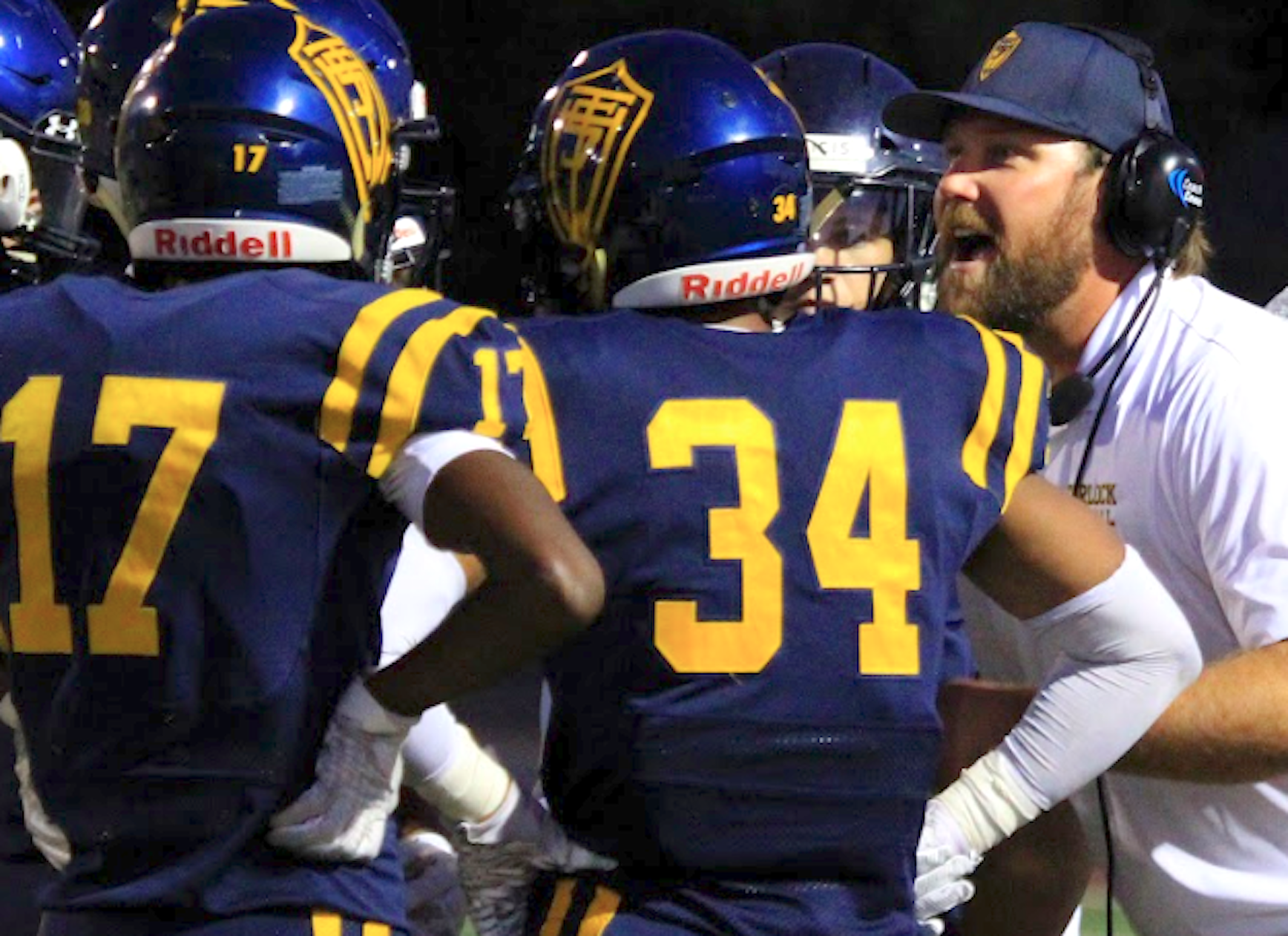 Turlock coach James Peterson (right) talks to his huddle during a 43-14 victory over Tracy on Thursday, Sept. 5, 2019. (Samantha Schmidt)

Room for 2 at the top: Turlock draws even with No. 1 BC after Dogbone win

t-1. (1) Buhach Colony (3-0): The Thunder handed Edison of Stockton its first loss, 35-27. For the second week in a row, Buhach Colony overcame next-level talent. This time, the Thunder had to corral the Vikings’ sophomore running back Raleek Brown (three touchdowns), who has offers from 17 Division I universities, including Alabama, Oklahoma and Michigan. Nate Ruiz scored the tying and go-ahead touchdowns for Buhach Colony. Friday: at Weston Ranch.

t-1. (2) Turlock (2-1): Anthony Frias rushed for 137 yards and three touchdowns on just nine carries and capped his performance with a sack as the Bulldogs dominated both sides of the ball in a 43-14 victory over Tracy in the Battle for the Dogbone. Friday: vs. Sheldon.

3. (3) Oakdale (2-1): Leo Ayala, Zeke Saffar and Cameron Snow found the end zone for the Mustangs, who survived a trip to the coast to play Aptos, 21-19. Snow gave Oakdale a 14-3 lead in the third quarter with a scoop-and-score touchdown. Friday: vs. Palma.

4. (4) Downey (3-0): Robert Rivera bounced back from a scary collision in the third quarter to highlight the Knights’ 34-27 come-from-behind victory over Merced. Rivera scored twice in the fourth quarter on runs of 70 and 54 yards as Dowey overcame a 21-12 halftime deficit. Friday: vs. Escalon.

5. (6) Manteca (2-1): The Buffaloes rebounded from a shootout loss to Downey with their first shutout of the season. Manteca traveled to Livermore, where the green machine blanked Granada, 50-0. Ryan Ward completed his final nines passes, Jacob DeJesus had three touchdowns and Trabron Russell rushed for more than 125 yards. Friday: at Tracy.

6. (5) Central Catholic (0-3): The Raiders’ rough start to the season continued with a 42-7 loss to St. Mary’s in the Holy Bowl. Two-way starter Minaya Olivo was knocked out of the game on the first possession by a blindside hit, adding to Central Catholic’s significant injury woes. The schedule has been merciless, though, and will continue with a long road trip to Los Angeles. Friday: at Upland.

7. (7) Patterson (2-1): The Tigers trailed 13-10 in the third quarter to Los Banos but stormed to victory with 27 unanswered points. Defense helped turn the game around. After Los Banos took its last lead, Patterson’s defense yielded just 20 yards for the rest of the game. Friday: at Modesto.

8. (8) Gregori (2-1): The Jaguars overcame a pesky challenge from Beyer and take a two-game winning streak into this week’s matchup with McNair, which is coming off a loss to another Modesto City Schools team (Enochs). Friday: at McNair.

9. (10) Sierra (3-0): The Timberwolves avenged a playoff loss to Pacheco a season ago with an emphatic 45-12 victory. Matt Dunham scored the first three touchdowns and sophomore running Kimoni Stanley continued his impressive start to the season. Stanley has rushed for nearly 400 yards in the last two games. Friday: vs. Lathrop.

10. (9) Merced (1-2): The Bears lost for the second in three games, but they stick in the Top 10 because of their strength of schedule -- and the fact that they had No. 4 Downey on the ropes in the second half. Desmond Thompson rushed for more than 100 yards and turnover-prone offense avoided mistakes in the near-upset. Friday: at Madera.