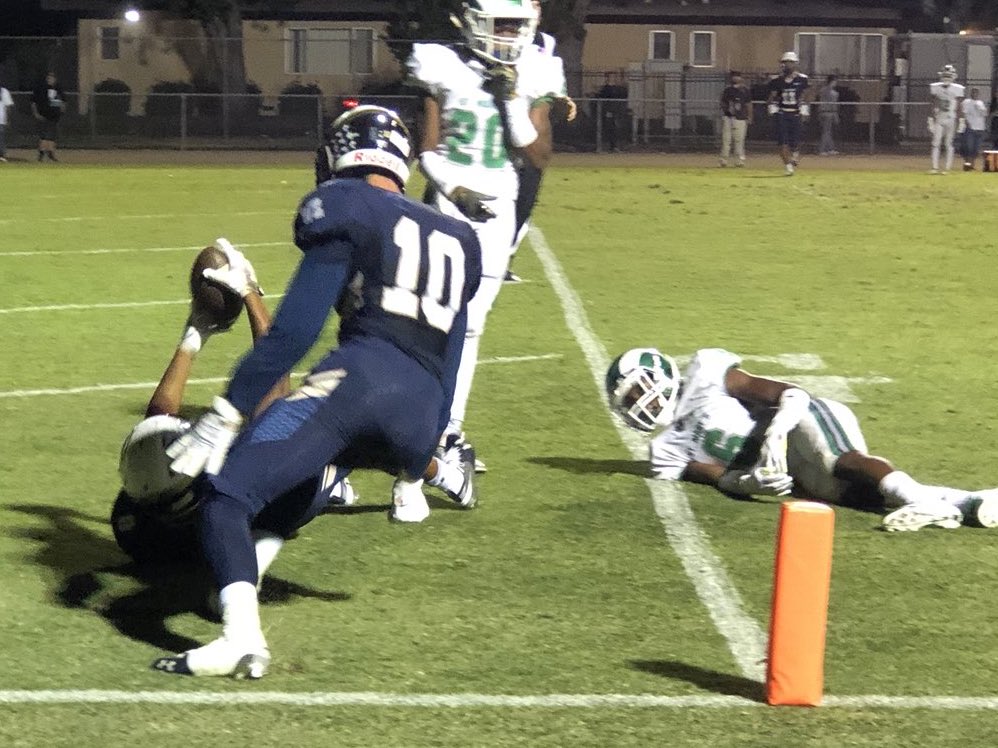 After traveling to Clovis West and De La Salle to open the season, Central Catholic coach Roger Canepa, a fiery four-fingered general, expected a letdown, even in a rivalry game as intense as the Holy Bowl.

He just didn't think it would take a full half of football to snap out of the funk.

"I knew we were going to have a slight letdown," Canepa said following a 33-20 victory over rival St. Mary's on Friday . "It's hard to get up every week. We got the win. I don’t know if we played our best game, but we found a way to win."

Senior Kyle Jacklich continued his impressive start to the season, rushing for a team-high 174 yards and three touchdowns as the Raiders outscored the Rams 13-0 over the final 24 minutes. The game was tied at 20-all at the half.

"Defensively, we didn't play well in the first half," Canepa said. "We played two tough games and it took us awhile to get going. In the second half, we got 14 (points) and the defense shut them out. We played a great second half.

"Even though it's the Holy Bowl, we were a little tired because we've been tested. St. Mary's was ready to go and they played hard, but we set the tone in the second half. We didn't throw a single pass. We lined up and said, 'Here we are.'"

National recruit Dawaiian McNeely, who has offers from Tulane, Arizona State and Fresno State, among others, was limited to defensive duties after suffering a shoulder injury in the loss to De La Salle. Jacklich filled in at tailback and Minaya Olivio at fullback, and both players found the end zone for the Raiders.

Though Jacklich lacks the same size and breakaway speed as the 6-foot-2, 210-pound McNeely, he may be the Raiders' toughest running back. He craves contact, and his game spikes with every pad-crackling blast — dished or taken.

"We finally blocked people," Canepa said. "Minaya did a great job at fullback. We executed pretty well on offense."

Oakdale 33, El Capitan 6: A slow start was erased by a fast finish as seventh-ranked Oakdale survived a scare from El Capitan. Four different players scored in the second half for the Mustangs, who found themselves in a surprising dogfight with the host Gauchos. Jacob Tanori’s 20-yard run tied the game at 6-6 going into the intermission.

The Mustangs found their form in the second half, though. AJ Martinez, Zeke Saffar, Caleb Kuppens and Leo Ayala scored rushing touchdowns as the Mustangs overcame turnovers and malaise to improve to 2-1.

Martinez rushed for a team-high 117 yards on 17 carries. Max Moore had 110 yards and touchdown on 20 carries, but rolled his ankle and finished the game on the sideline. Ayala had 96 yards on just six carries, while Saffar, a highly-touted sophomores, finished with 63 yards.

Pitman 45, Pleasant Grove 28: Payton Bass scored three touchdowns for the Pride, now 3-0. Bass scored on runs of 7 and 45 yards, as well as a reception of 20 yards to give Pitman a 27-14 lead the intermission.

Ripon Christian 30, Summerville 3: Cade Alger and Nolan Lingley combined for three passing touchdowns, Michael Solario broke loose on a long scoring run, and the defense "was insane tonight," Ripon Christian coach Trey Ozenbaugh said in a text message to the Front Row. "Flying to the ball and arriving with attitude." Two-way talent Sean McGovern had a touchdown reception and an interception, while Declan Van Vuryen anchored the defense.

Denair 56, Millennium 18: Steffin Winston led the Coyotes' assault with three touchdowns -- two on the ground and one through air -- while Dylan DeSilva and Jorge Yanez each had two rushing TDs. Hunter Musgrave also scored for Denair, which has outscored its first two opponents 88-18.

Ripon 42, Central Valley 7: Derric Roy scored on a 73-yard run and then made it 42-0 with a 7-yard burst as the Indians continued their mastery of the larger opponents. Ripon skunked Weston Ranch, a Valley Oak League program, in its opener. Ryan Daggett added a 15-yard touchdown run to make it 35-0 with 5:56 left in the third quarter. The Hawks avoided becoming the Indians' third shutout victim, punching in a score with 67 seconds left.

Escalon 34, Sonora 6: Colton Panero and Luke Anderson scored two touchdowns apiece for the Cougars, ranked No. 2 in the small-school poll. Escalon scored the first 28 points. Winless and scoreless through its first two games, Sonora's Karson Clifton finally found the end zone with 7:13 left in the fourth quarter. Escalon (3-0) responded with a 14-yard touchdown pass by Lucciano Dutra to Kaidence Trejo.

Big Valley Christian 28, Le Grand 0: Javyn Drobnick rushed for 153 yards and three touchdowns and second-year starting quarterback Gunnar Selover made clutch throws and kicks for the Lions (2-0), who only suited up 17 players. Selover was 4 for 4 on extra-point attempts. "Defense played unbelievably. We were really concerned about their size at all positions and their depth," Big Valley Christian coach Brian Berkefeld said. "Our guys gang-tackled all night. ... Offense did it the hard way."

Hilmar 49, Gustine 0: Isaac Sharp scored on four of his five touches and finished with 97 yards as the small-school No. 1 Yellowjackets throttled Gustine. Sharp has been efficient to start the season, scoring 50 percent of his carries.

Gregori 49, Beyer 0: Baker Melendez completed 11 of his 16 passes for 149 yards and a touchdown, a 39-yards toss to Trey Longstreth. Twin brother Marcello Longstreth had 80 yards and two touchdowns on just eight carries, while Isaac Herman and Titus McLendon had one rushing TD apiece. The defense was relentless in this battle of former Modesto Metro Conference foes, racking up six sacks.

McNair 36, Enochs 22: Kameron Myers returned a punt for a touchdown and later found the end zone on a halfback pass from Xavier Vera for the Eagles, who have lost two straight and host Central Valley next week.

Atwater 60, Davis 36: Charles Jackson had touchdown runs of 76 and 67 yards for Atwater (2-1), but the star was quarterback Isaiah DeLeon. On a night when the Falcons produced 686 total yards, nearly half were created by DeLeon. He had 118 rushing yards, 204 passing yards and six total touchdowns, including four through the air.

Golden Sierra 44, Orestimba 43: Jacob Bettencourt threw two long touchdown passes, including one to Jacob Dominguez with 7 minutes left to give the Warriors a five-point lead. Golden Sierra responded, though, escaping Pauletto Field with a come-from-behind victory.

Granada 35, Manteca 14: In a battle of Northern California section finalists, Granada of Livermore seized an early lead and never relented. The Matadors scored the first 28 points as the Buffaloes suffered consecutive losses for the first time since 2012. Making matters worse: Record-setting running back Trabron Russell left the game shortly before halftime with an ankle injury.

Patterson 55, Los Banos 7: In a matchup of former Western Athletic Conference contenders, Patterson pummeled Los Banos in its debut beneath the palms. The host Tigers rushed for four touchdowns and took advantage of a mistake-prone Los Banos to improve to 2-1.

Modesto Christian 24, Calaveras 0: Four different players scored and Jay Nglam anchored a lights-out defense as the Crusaders won their second straight game on the road and avenged an ugly loss to Calaveras last fall. Nglam had three tackles, two pass deflections, one sack, one interception and a fumble recovery.