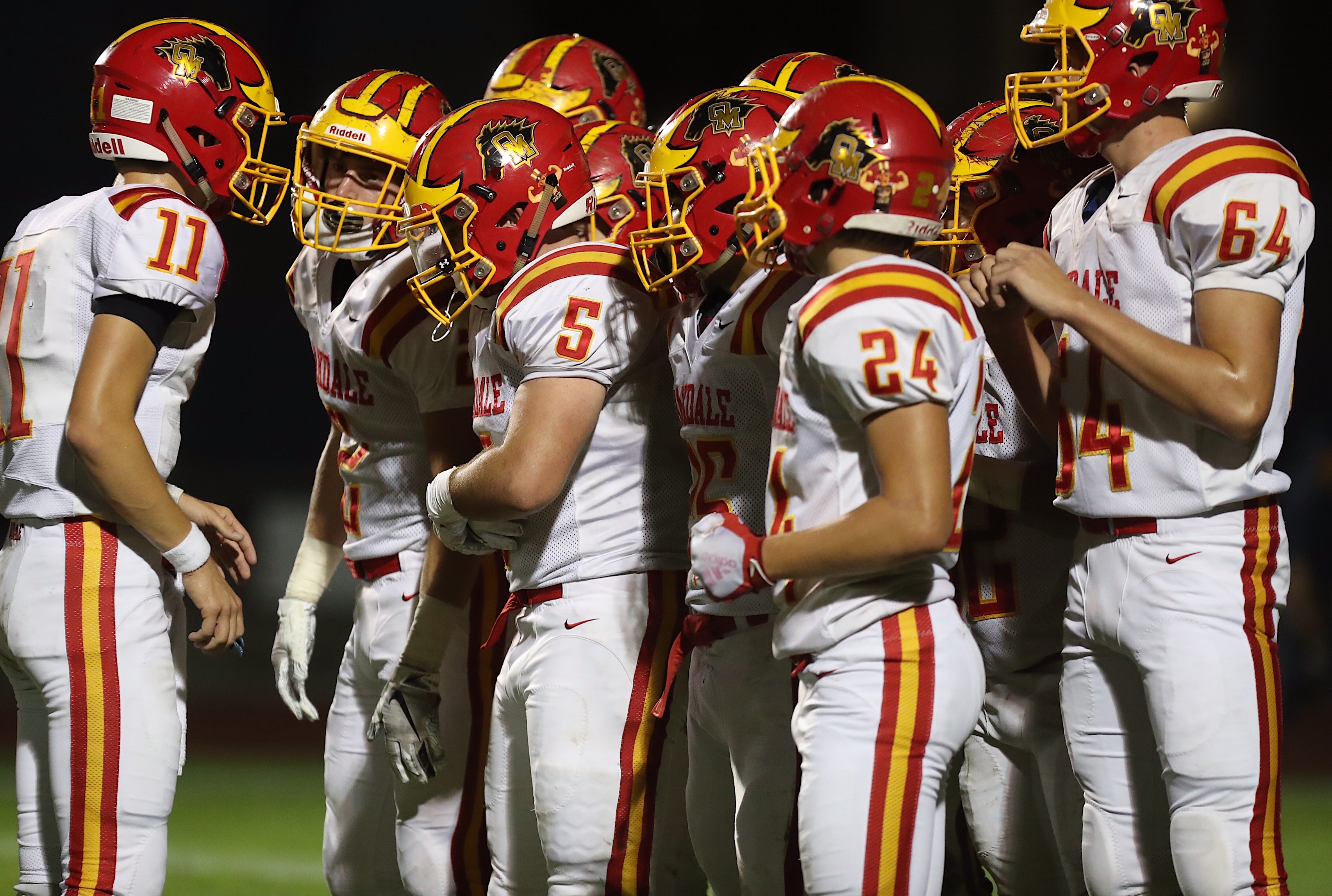 FILE PHOTO: The Oakdale offense, shown here in an Oct. 5, 2018 victory over Sierra, scored eight rushing touchdowns in a win over Kimball on Oct. 12, 2018. (Wayne Thallander)

Oakdale 69, Kimball 28: Max Moore rushed for 136 yards and five touchdowns, A.J. Martinez had three runs of 20 or more yards en route to 112 yards, and Caleb Kuppens found the end zone three times for the Mustangs (7-2, 4-1), who surge into their bye and have two weeks to prepare for VOL rival Central Catholic. The Mustangs can force a share of the VOL title with an upset victory over the Raiders (8-0, 4-0), the season-long No. 1.

Sierra 16, East Union 13: The Timberwolves trailed their crosstown rival 13-9 at the half, but super sophomore Kimoni Stanley scored the go-ahead touchdown early in the fourth quarter. Stanley found the end zone from inside the 5-yard line, plunging across the goal line with the eventual game-winner.

Manteca 55, Weston Ranch 0: The Buffaloes scored 21 points in the first quarter and never looked back, collecting their third consecutive victory. Manteca (5-3, 3-1) closes the season with its intracity rivals, Sierra (Oct. 19) and East Union (Oct. 26). The Buffaloes remain in the hunt for a share of the VOL title, but will need to win their final two games and hope Central Catholic stumbles. The Raiders close the season with Kimball next week and then Oakdale.

Merced 37, Patterson 6: Desmond Thompson scored three rushing touchdowns in the second half, racking up 128 yards on 19 carries, and the Bears' defense limited the Tigers to just two field goals by Adrian Melesio (23 and 39 yards). Quarterback Junior Garcia also threw two touchdowns to Xavier Stewart, including a 34-yard strike on fourth and 18 to make it 10-3 in the second quarter.

Buhach Colony 34, Central Valley 12: The Thunder bounced back from its loss to Merced with a show of force against the Hawks. Buhach Colony led 15-6 after the first quarter and never looked back, improving to 6-2 overall and 3-1 in league play.

Pacheco 42, Mountain House 28: Julian Moran scored four touchdowns, including scoring bursts of 21, 37 and 65 yards, and the Panthers seized first place in the WAC with a strong second-half kick. Pacheco outscored the Mustangs 28-14 over the final two quarters, breaking open at 14-14 game at the intermission. Moran rushed for 242 yards, according to the Merced Sun-Star. The Panthers can clinch a share of the first league title in school history with a victory over winless Beyer next week.

Davis 42, Beyer 13: Xavier Rodriguez threw five touchdown passes and Gregory Smith anchored the defense with a 55-yard scoop-and-score as the Spartans throttled Modesto City Schools rival Beyer. Rodriguez began the night as the Sac-Joaquin Section’s top passer with 2,374 yards and 23 touchdowns. He added to those totals with another prolific evening, racking up more than 300 yards through the air.

Lathrop 48, Johansen 19: The Spartans bounced back from a loss to Davis with a runaway victory over the Vikings. At 3-5, Lathrop faces an uphill battle to get to .500 with Los Banos (Oct. 19) and Mountain House (Oct. 26) left on the schedule.

Livingston 43, Riverbank 0: Rocklin Baptista connected with Anthony Barajas on two early scores as the Wolves trounced the Bruins for their first TVL victory.

Sonora 38, Amador 7: Jake Gookin threw for 198 yards and a touchdown on just six completions as the Wildcats continued to distance themselves from an 0-4 start. Sonora (4-4, 3-0) has won four straight games and Gookin, its second-year starter, has been the catalyst. He rushed for 61 yards and two touchdowns, and connected with Nick Crockett on a scoring strike. Bryan Wynne also had a pick-six interception return for Sonora, which travels to Calaveras next week.

Calaveras 26, Argonaut 6: Calaveras has won five straight games and will host Sonora next week. The winner of that game will have the inside track to the Mother Lode League title with one game to play. Jon Arbuckle scored on two short runs and Logan Weatherby punctuated the win with a 10-yard run late in the fourth quarter.

Ripon Christian 49, Mariposa 7: Michael Kamps scored three touchdowns and the defense returned two fumbles for a score in a decisive victory over the Grizzlies. Sean McGovern and Dale Fisher had scoop-and-score touchdowns for the Southern League-leading Knights, now 8-0 overall and 5-0 in conference. McGovern has scored a defensive touchdown in back-to-back weeks.

Denair 36, Delhi 6: Hunter Musgrave rushed for two touchdowns and Elvis Silva threw two touchdowns, including a 59-yard catch-and-run connection with Steffin Winston as the Coyotes improved to 7-1 overall and 4-1 in conference.

Le Grand 7, Gustine 6: Ivan Perez scored on a 1-yard run and Alfredo Moreno’s extra-point kick with 7 minutes left in the game gave Le Grand the victory. Tony Garcia rushed for 226 yards on 42 carries and was the workhorse down the stretch. He had 13 carries in the fourth quarter as the Bulldogs controlled the clock.