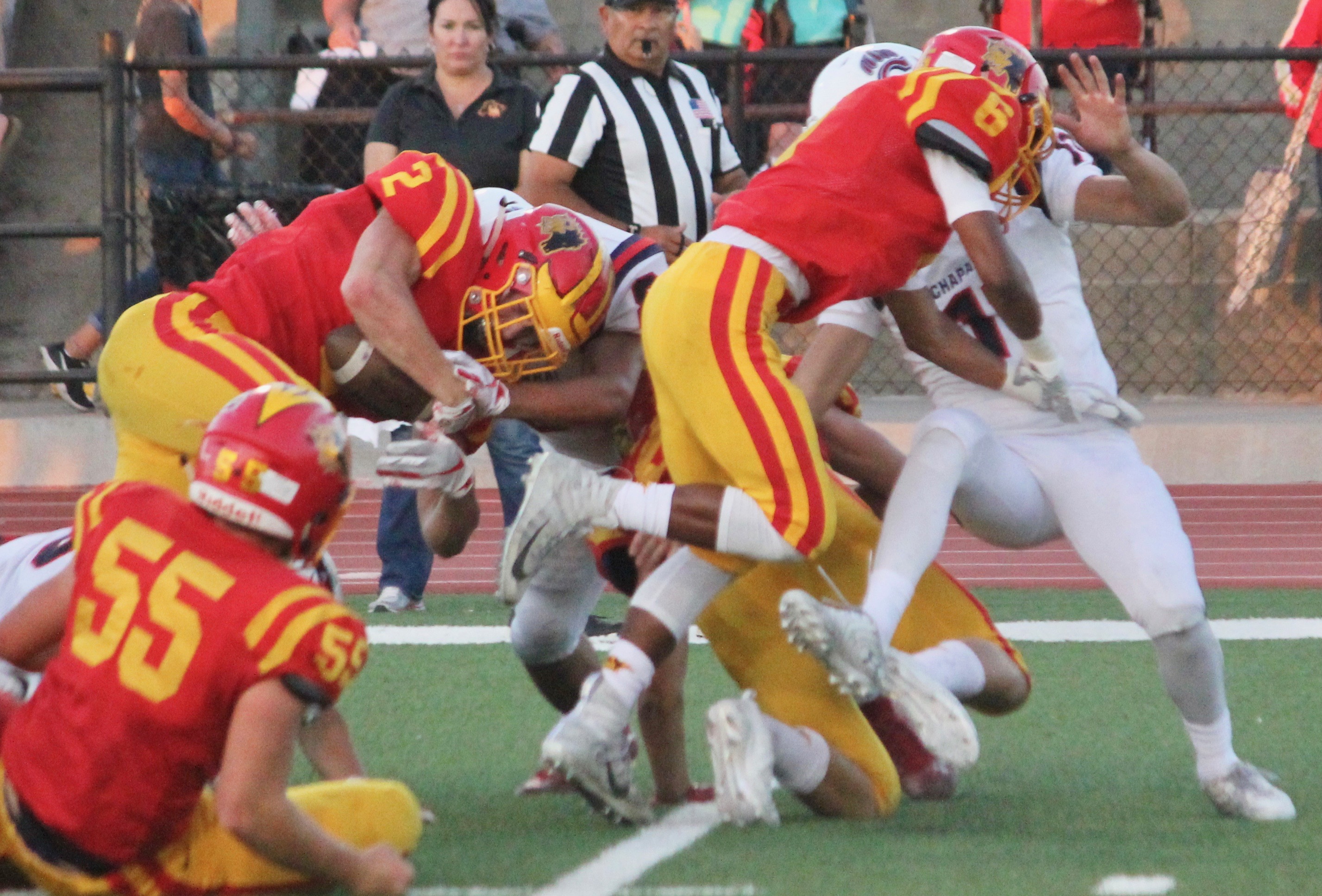 FILE PHOTO -- Oakdale's Caleb Kuppens fights for yards in a victory over Chaparral of Colorado on Sept. 7, 2018. (Glenn Morris)

MANTECA — When the Valley Oak League schedule was released, Oakdale coach Trent Merzon was concerned about the Mustangs’ opener at East Union.

Dino Cunial Stadium isn’t the toughest place to play, but the Lancers are much improved under coach Willie Herrera and have qualified for the Sac-Joaquin Section postseason each of the last two seasons. With 22 new starters, Merzon was worried Oakdale faced a trap game in its VOL debut.

His fears were confirmed in a nip-and-tuck 35-26 victory on Friday evening. At one point, Oakdale’s lead had been whittled down to one (21-20) on Eric Morales’ 55-yard sprint midway through the third quarter.

Showing their championship pedigree, though, the Mustangs (4-1) closed the game on a 14-6 run before taking a knee at the Lancers’ 1 with less than a minute to play.

East Union was carried by junior Eric Morales, who bounced back from an injury marred August. Morales was 18 of 34 for 230 yards. His two touchdown throws were offset by two interceptions. Morales also rushed for 104 yards on eight carries.

Raylen Carter and JoJo Espinosa found the end zone for the Lancers (1-4), who have lost four of their last five games.

Oakdale hosts Weston Ranch on Friday, while East Union looks to keep its postseason hopes alive with a home date against Kimball.

Sonora 36, West 21 — The Wildcats are winless no more. Sonora snapped a four-game losing streak with the type of performance fans expected all along from the preseason small-school No. 1. Reigning Mother Lode League Defensive Player of the Year Evan Bearden scored two touchdowns, including one on a pick-6, and the offense amassed more than 500 yards in a rout of West.

Central (Fresno) 54, Turlock 14 — Playing against the Fresno region's top team, Turlock found itself in a 27-6 hole at the half. The Bulldogs had no answer for Grizzlies senior Trent Tompkins, who was 23 of 33 for 393 yards and six touchdowns. He also rushed for 69 yards and a score. Jonah Kosakiewicz was responsible for the Bulldogs' only points, tossing touchdowns to Lucas Curtis and Dalton Linn. Turlock fell to 0-3 on the road this season, and after a thorny non-conference schedule that included the likes of Freedom (Oakley) and Sheldon (Elk Grove), the Bulldogs (2-3) look forward to a bye week.

Pitman 42, Summerville 0 — The Pride improved to 5-0 with a runaway victory over Summerville, which has taken its lumps against teams from the FrontRowPreps.com region. Pitman takes momentum into their bye week. The Pride open Central California Athletic League play on Sept. 21 against Enochs.

Sauser was named the Panelli Passing Academy small-school Top Gun award winner last week and showed no signs of slowing down. His touchdown passes were to Xavier Carlton, whose “best week ever” also includes scholarship offers to USC and Washington State, Johnny Williams and Dillon Johnson.

Orestimba 55, Mariposa 6 — The three-time defending Southern League champions opened their title defense with a resounding victory over a team thought to be a challenger. Tyler Vargas had two long touchdowns and Jacob Bettencourt's 7-yard run gave Orestimba a 34-0 lead at halftime. Vargas scored on two plays of 60 or more yards as the Warriors, fresh off a bye, returned to the win column. Orestimba travels to Le Grand next week.

The region’s leading rusher Javyn Drobnick had 153 yards, his fourth 100-yard game to start the season, but left the game in the third quarter with an injury. Coach Brian Berkefeld said the injury isn’t serious and was pleased to see Drobnick’s backup, Izaiha Homa, take the baton. Homa had 73 rushing yards.

Gunnar Selover was 8 of 12 for 84 yards and two touchdowns. Four of his incompletions were drops.