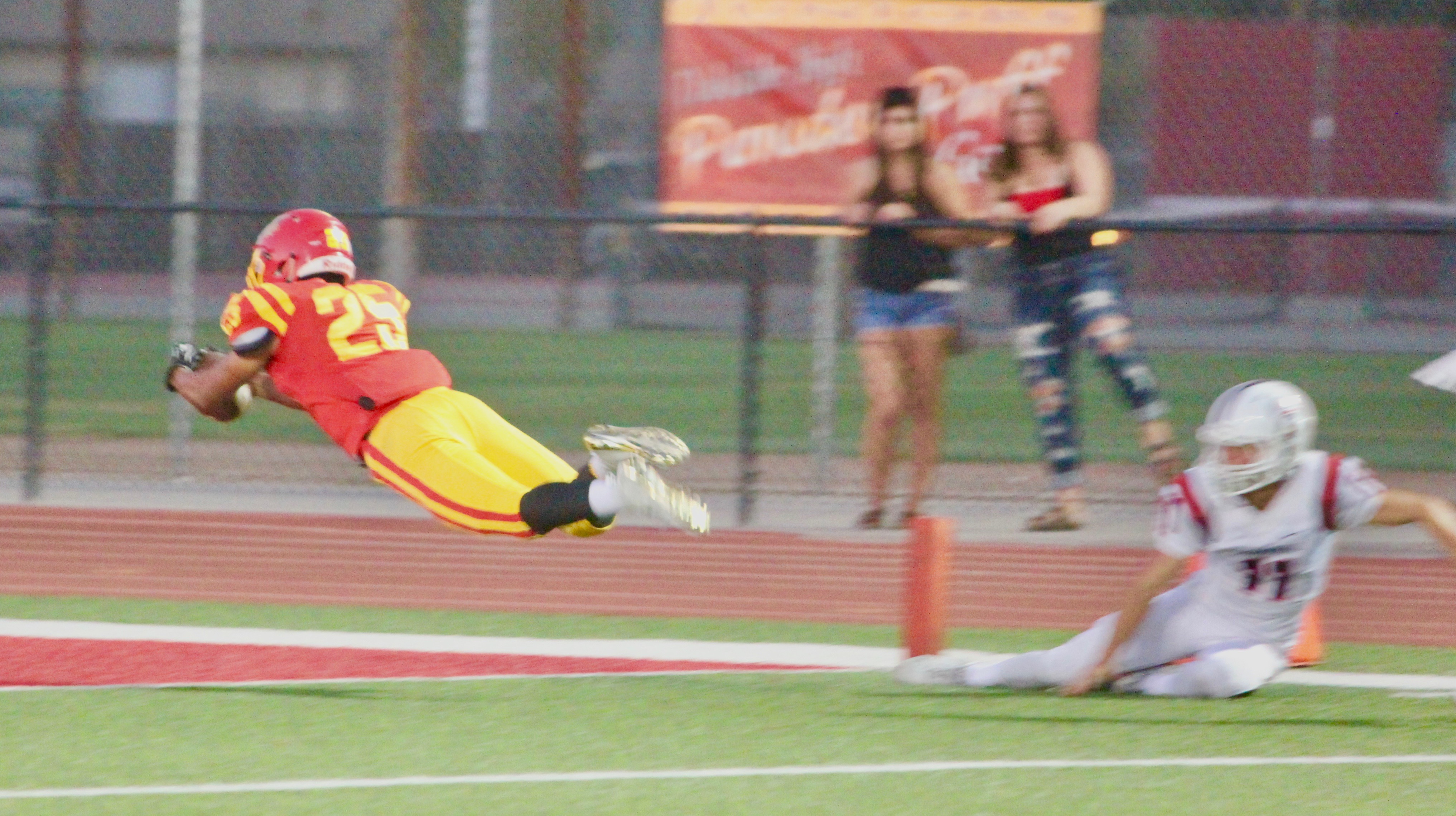 Oakdale sophomore running back Zeke Saffar dives into the end zone with a touchdown during the Mustangs' 28-20 victory over Chaparral of Colorado on Sept. 7, 2018. (Glenn Morris)

Roundup: Top teams in the VOL , SL and TVL dive into league play next week

OAKDALE — Pressed to the edge by Chaparral of Colorado, the Oakdale football team mustered some of that ol’ Corral magic on Friday evening. The Mustangs outscored its out-of-state guests 14-6 in the fourth quarter, creating the separation in a 28-20 victory.

Max Moore scored the eventual game-winning touchdown with a 36-yard run with 6:41 remaining. Caleb Kuppens’ two-point conversion made it 28-14. Moore finished with a team-high 141 yards on 23 carries, and he scored the Mustangs’ first and last touchdowns of the evening.

Sophomore Zeke Saffar had 136 yards and a touchdown on 10 carries, while Kuppens found the end zone with a 3-yard rush to start the fourth quarter.

Oakdale (3-1) led 14-7 at the intermission. Moore opened the scoring with a 10-yard reception from Hayden Knittel. After Chaparral’s Konnor Ruth tied the game with a 2-yard keeper, the Mustangs regained the lead on a 47-yard dash by Saffar early in the second quarter. Cameron Snow anchored the defense with an interception and an onside recovery late.

Central Catholic 45, Lincoln 7: Minayo Olivo scored two touchdowns and rushed for more than 100 yards as the Raiders, one of the smallest schools in the Sac-Joaquin Section, cruised past the largest.

Dalton Durossette threw three touchdowns as Central Catholic coach Roger Canepa opened up the offense against the winless Trojans. The Raiders threw the ball more than 20 times, often a rarity in their run-heavy offense. Durossette’s TD passes were to Jack Rice, Justin Traina and Antonio Cardenas.

“A lot of people didn’t think we’d be 3-1,” Canepa said, referring to his games at Clovis West and De La Salle. “We’re ready for the VOL. It’s going to be a grind. We’ve got to be ready for Manteca, especially now that they’re coming off a big win.”

Vanden 46, East Union 18: Vanden scored the first 25 points and never looked back, sending the Lancers to their third loss in four games. Jayden Blakely and Jordan Bartley combined for five touchdowns in the victory.

JoJo Espinosa had two rushing touchdowns for the Lancers, who also scored on a 67-yard kickoff return by Melkhi Richardson in the second quarter.

Sierra 19, Lathrop 7: Shane Johnson and Damian Simon found the end zone for the Timberwolves, and Jordan Shinn connected on fields goals of 36 and 33 yards. Johnson scored on a 55-yard run in the first quarter, while Simon returned an interception 31 yards midway through the third quarter.

Hilmar 39, Sonora 20: The top-ranked team in the FrontRowPreps.com small-school poll, the Yellowjackets found themselves in a fight with the former No. 1 team.

It’s been a season-long struggle for the winless Wildcats, but Sonora battled the reigning Division VI champions for three quarters. After routing its first three opponents, Hilmar led just 21-14 heading into the final 12 minutes.

Behind a dazzling performance by Isaac Sharp, the Yellowjackets closed with an 18-6 kick and improved to 4-0 heading into Trans-Valley League play. Hilmar draws No. 3 Ripon in its opener.

Escalon 55, River City 8: Kaden Christensen rushed for 110 yards and scored two touchdowns, including a 64-yard burst to open the second half. The high-flying Cougars, No. 2 in the FrontRowPreps.com small-school poll, scored the game’s first 42 points. Escalon has a bye next and will have two weeks to prepare for Hilmar.

Ripon 24, Calaveras 21: The Indians’ defense came through yet again, preserving a halftime lead. Ripon scored all of its points in the first half, racing out to a 24-14 lead on Calaveras in a rematch of their Sac-Joaquin Section Division V playoff game.

Nico Ilardi caught an 11-yard touchdown pass from Ryan Daggett, who closed the first half with a 26-yard strike to Dorian Dougherty. Danny Hernandez had a 12-yard scoring run and Nathan Valdez booted a 19-yard field as Ripon improved to 4-0, setting up a showdown with top-ranked Hilmar next Friday.

Still searching for its first win, Calaveras clawed within one score on a 50-yard touchdown run by John Arbuckle.

Modesto Christian 47, El Capitan 8: Patrick Garcia and Isaac Shinmann scored two touchdowns apiece and Hayden Sauser completed nine of his 10 passes for 142 yards as the Crusaders, No. 4 in the small-school poll, improved to 4-0 one year after being 0-3 in the first month of the season. Modesto Christian opens league at Riverbank.

Denair 56, Stone Ridge Christian 28: Dylan De Silva found the end zone multiple times for the Coyotes (3-0), who outscored the Knights 35-7 in the second half. The game was tied at the intermission at 21-all.