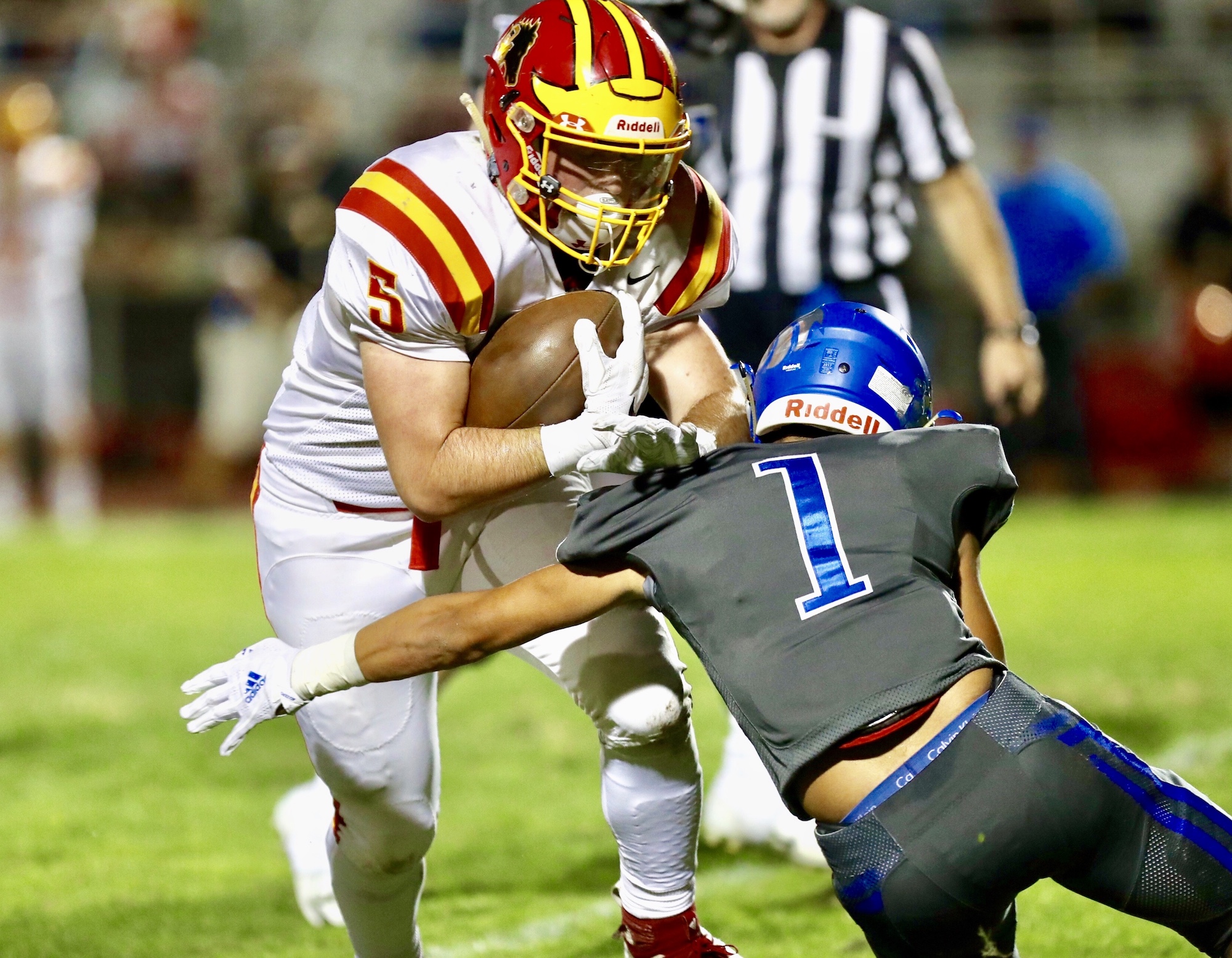 Oakdale running back Max Moore tries to slip a tackle by a Sierra defender during a 56-24 victory on Oct. 5, 2018. (Wayne Thallander)

NEWMAN —There is trouble on the West Side.

Three-time defending Southern League champion Orestimba suffered its second straight loss, this one at the hands of Denair, a team powered by a three-headed ground attack and experience on both sides of the ball.

Drew Pritchard scored three touchdowns and Hunter Musgrave rushed for more than 100 yards and scored twice for the Coyotes in a 35-28 victory at Pauletto Field. Steffin Winston and Pritchard anchored the defense, which put Orestimba on its heels with two key interceptions.

OAKDALE 56, SIERRA 24 — The lightning-and-thunder combination of Zeke Saffar and Max Moore helped the Mustangs (6-2, 3-1) climb out of an early hole against the Timberwolves. Saffar and Moore revved up the Mustangs’ run-heavy offense with first-quarter touchdowns and Oakdale returned to the win column following a VOL loss at Manteca last week.

ESCALON 62, RIVERBANK 7 — The Cougars rested offensive catalysts Lucciano Dutra and Luke Anderson in a rout of the overmatched Bruins. Wyatt McCune started in place of Dutra and got the Escalon offense rolling early with a 6-yard touchdown pass to Alex Jiminez. McCune also had a QB sneak from the 1-yard to complete the scoring for the Cougars, who snapped a two-game losing streak and picked up their first Trans-Valley League win.

WATERFORD 42, MARIPOSA 14 — Southern League MVP candidate Michael Vivo found the end zone early on a 2-yard run as the Wildcats won for the sixth time in seven games. On pace for more than 2,000 yards of total offense in his third and final varsity season, Vivo threw for more than 200 yards in the first half alone.

Lost in all of Vivo’s fireworks was the play of the defense, which forced two first-half turnovers and made two red-zone stops to keep the Grizzlies off the scoreboard. Ricardo Ramirez also returned a fumble on the opening kickoff of the second half 22 yards for a touchdown.

Ripon Christian scored twice on fumble recoveries and led 35-0 at the intermission. The undefeated Knights have won six of their seven games by 27 or more points.

The defense has been a catalyst during Ripon Christian’s electric start, which includes a 23-17 victory over Orestimba, the Warriors’ first league loss in four calendar years.

SONORA 42, ARGONAUT 7 — Jake Gookin carried the ball 11 times for 223 yards and three touchdown as the Wildcats continued their dominance of the Mother Lode League. Gookin was also 6 of 8 passing with a touchdown pass to Evan Bearden. Sonora is 26-0 since joining the MLL.

LOS BANOS 47, JOHANSEN 6 — Junior Landon Ramos had four touchdown receptions for the Tigers (3-3, 2-1), who have won three of their last four games. Quarterback Dasani Tate completed 16 of his 21 passes for 224 yards and five touchdowns. He favored Ramos, who finished with 90 yards on six catches. Both were lifted in the third quarter with the result well in hand.

LE GRAND 39, DELHI 6 — Tony Garcia rushed for 145 yards and two touchdowns on 17 carries, but it was the Bulldogs' balanced attack that overwhelmed the Hawks. Five different players scored for Le Grand, which scored its most points of the season. Michael Dinkins tacked on a 66-yard punt return for a touchdown as the Bulldogs surged into the break with a 26-0 lead.

DAVIS 55, LATHROP 28 — Armed with the section's leading passer, Xavier Rodriguez, the Spartans turned to running back Francisco Mercado to deliver Friday's WAC victory over a former Valley Oak League team. Rodriguez completed 14 of his 20 passes fro 243 yards and three touchdowns, but the second-year starter was overshadowed by Mercado who rushed for 243 yards and five touchdowns as Lathrop "forced my hand," Davis coach Tim Garcia said. Mercado's five touchdowns is the second-best single-game total in school history. Elijah Davis rounded out the offensive stars for the Spartans with seven catches for 108 yards and a TD.

PATTERSON 38, CENTRAL VALLEY 35 — The Tigers overcame two 15-minute power outages and 17 penalties in a closer-than-expected victory over the Hawks. Sophomore quarterback Logan McCleery's breakout season continued. McCleery threw for 230 yards and two touchdowns, including a 15-yard strike to Moses Ruelas in the third quarter for the eventual game-winning points. Central Valley outscored Patterson in the second half, trimming a 17-point deficit to three with touchdowns by Isaiah Hildago (rushing) and Xavier Alvarez (interception return).