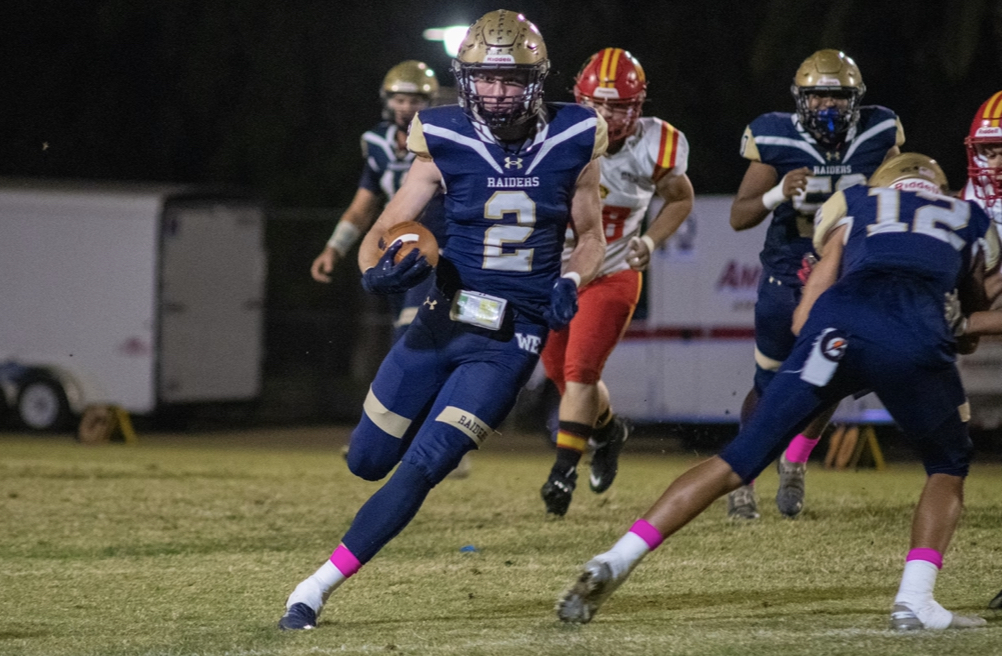 MODESTO -- In a battle of Valley Oak League juggernauts, fourth-ranked Central Catholic knocked off No. 3 Oakdale with an impressive 35-7 effort.

These programs have a history of dominance in the VOL, combining for nine league titles since the Raiders transitioned into the league in 2014.

Since then, nobody has played vaunted Central Catholic, a four-time CIF State champion, tougher than Oakdale. The Mustangs’ four wins against the Raiders are the most by any VOL team since the Raiders' merger.

History, however, was just that on Friday evening - history.

The latest chapter in their rivalry belonged to the Raiders (4-4, 3-0) and star running back Tyler Jacklich, who ran all over the Mustangs' defense. Jacklich tallied two touchdown runs in a runaway first half, one of which went for 70 yards. A budding college prospect, Jacklich was all smiles after the game.

The perfect combination of speedster and bruiser, Jacklich credited his running to “picking the defense apart and figure out where they’re lacking and where we got them in that part (of the field).

"I just see a hole and I go – if there’s somebody in it, I’ll run right through them, and I won’t stop,” he added.

Accounting for two more Raider touchdowns was senior Joel Roberts, who hauled in a 9-yard receiving touchdown and plunged in from the 2-yard line.

“Just run it behind my big guy, y’know?” said Roberts. “Roman (Foumai) does a lot for our offense. A lot of my (red-zone) touchdowns are like that ... just getting a push.”

Tyler Wentworth capped the scoring with a heave on the final play of the first half. Wentworth connected with Jaelen Nichols on a 50-yard scoring toss to make it 35-0 at the intermission.

“My first goal was to look off the safety," Wentworth said. "I knew if I looked off (the safety), we’d have two guys (against) their one, so just give him time to get down the field and get in the end zone, and then I threw it."

Since losing four of its first five games against some of the top teams in California, Central Catholic has looked the part of a VOL and Sac-Joaquin Section contender. The Raiders have won three straight, snapping the Mustangs' five-game winning streak with their latest effort.

On the other sideline, the Mustangs’ lone score came from running back Gabe McDonald, a 1-yard run to open the second half.

“When I’m that close to the goal line,” mused McDonald, “it’s this or nothing. No matter what, we have to make something out of nothing, and we did. I put trust into my teammates and did it not for myself, but for them.”

Despite the loss, the Mustangs (6-2, 2-1) cling to thin VOL title hopes. They'll need to finish strong with victories against Kimball and top-ranked Manteca, and then hope Manteca sets up their regular-season finale with a win against Central Catholic next week.

McDonald, one of three hard-working running backs in the Mustangs' Wing-T offense, believes the way Oakdale responded in the second half -- outscoring the Raiders 7-0 -- shows their mettle and grit. Those two qualities will show up on film, he's sure of it.

“(Kimball and Manteca) know that we played through that tough loss," he said. "We also improved and learned a lot from that game. I believe they should worry; we’re always hungry and will not quit no matter the circumstance."

Lucas Stackpole is a student intern with FrontRowPreps.com. Stackpole is a senior at Sierra High School in Manteca, where he plays varsity water polo and baseball. He plans to study journalism in college, with an emphasis on sports journalism.