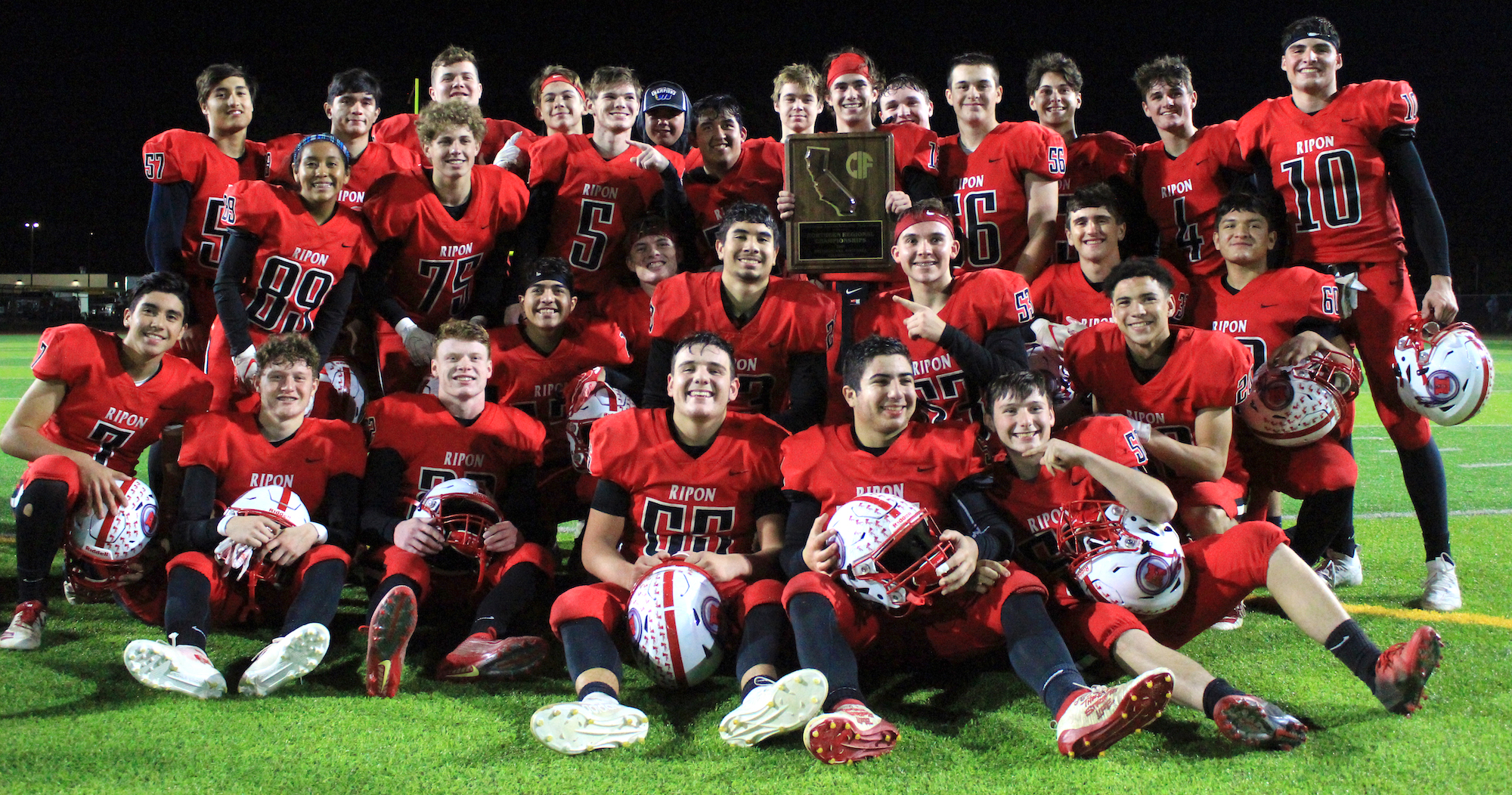 RIPON – The painters at Stouffer Field have decorated the end zones in red checkerboard, a sign that something special is happening.

The Ripon High Indians not only have advanced to the CIF State 4-AA final for the first time, they will enjoy the comforts of home Saturday night against Highland of Palmdale.

“The community deserves to have this game,” said Ripon coach Chris Musseman, whose Indians won their Northern California final over Sutter last week at Downey High. “They’ve been so supportive with everything they do with the kids and the program. They need to have this game here.”

It shapes up as an historic night. Trans Valley League rival Escalon also is the home team Saturday night in the state 4-A final against La Jolla. Fans must make a choice. The games will be held simultaneously, beginning at 6 o’clock. Both cities will, as it’s said, represent.

Ripon (13-1), anchored by its nine seniors who’ve carried a roster numbering as few as 18 on game night, willed its way to the Sac-Joaquin Section Division V and NorCal titles. Most observers expected their season to end before mid-December.

Ilardi was sidelined by a knee injury that night – among other injuries against the Yellowjackets – and used a two-game layoff plus a bye week to recover. His rehab proved critical. Musseman wasn’t sure at the time if his resourceful QB would play in another game.

When Ilardi returned, Ripon emerged with a 42-21 win over Escalon. That set in motion a three-way tie for the TVL title and, about a month later, a chance for glory.

Ripon, to a man, believed the loss to Hilmar revealed the team’s quality. Through the major injuries that night, they stayed competitive. The season’s arc told them they were right.

“The toughest games we’ve had this year were in our own league,” Musseman said. “You shouldn’t pick against us, even this week. … On paper, it does not look good for us, but I’ll take my kids. They fight, and they’re more talented than people think.”

Highland (12-3), coached by Richard Lear, will travel 309 miles for the championship game. Like Ripon, the Bulldogs responded from disappointment – in their case a one-point loss to rival Palmdale that cost them the Golden League title.

Creech clearly is dangerous, but so are the 6-1 Pecoraro’s passes to the 6-6 Jamison. To no one’s surprise, both teams earned their berth in the final.

“It’s kind of tricky to close down on one thing (with Highland),” said 6-3 Troy Brogan, Ripon’s rangy and versatile tight end/defensive end. “Whatever they throw at us, I think our defense is simple enough and fast enough to react to anything so I think we’ll be fine.”

Never in Ripon’s football history has there been a Week 15. Escaping that reality is impossible. But for the young men anxious to climax a remarkable run, the word “focus” resonates.

“There’s definitely been a buzz around town. Wherever you go, people are talking about it,” Ilardi said. “We weren’t supposed to make it this far. At this point, there’s not really that much pressure. We get to play at home. There’s nothing cooler than to play a state title at home.”