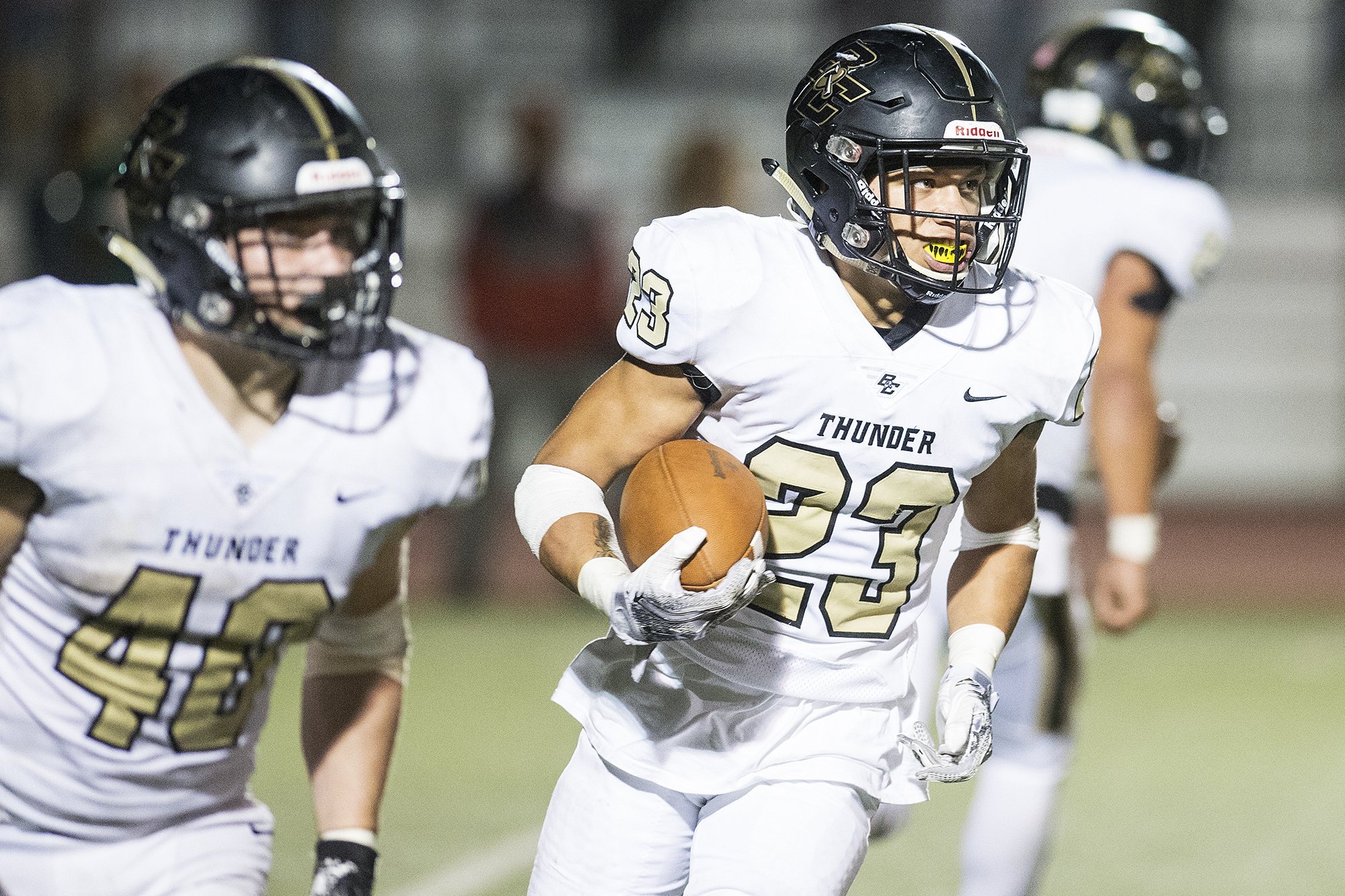 Buhach Colony senior Youlas Dickson's Player of the Year credentials are boosted by his team's blazing start. The Thunder have won their first eight games, their best start since 2011. (Merced Sun-Star)

Saving its best for last: CCC crown will be settled with rivalry bowl games

1. (1) Turlock (6-2, 3-0): The Bulldogs can clinch at least a share of their fourth consecutive league championship, including their second straight CCAL title with a victory over Gregori, a topsy-turvy team that was skunked by Downey a week ago. Friday: at Gregori.

2. (2) Buhach Colony (8-0, 4-0): Led by do-everything senior star Youlas Dickson, the Thunder are having their best season since 2011. That year Buhach Colony won its first 12 games and reached the Sac-Joaquin Section Division II semifinals as the No. 1 seed. Friday: vs. Golden Valley.

3. (3) Central Catholic (4-4, 4-0): With the rigors of the non-conference season behind them, the Raiders have gotten progressively better each week in the VOL and shouldn't be challenged until a Week 10 showdown with rival Oakdale. Over the last two weeks, the Central Catholic defense has allowed just 18 points. Friday: vs. Kimball.

5. (5) Oakdale (6-3, 4-1): The Mustangs will have two weeks to prepare for a Week 10 title showdown with rival Central Catholic. The stakes are simple and familiar: To carve a three-way share of the VOL championship, the Mustangs must avenge last year's loss to the unbeaten Raiders. Friday: bye.

6. (6) Downey (5-3, 2-1): The Knights knocked Gregori from the top-10 with an impressive 36-0 victory. Robert Rivera continued his touchdown tear with three rushing scores, but the night belonged to a much-maligned and oft-injured defense. Lawrence Harris spiced a two-touchdown night with an interception and David Gorman had a team-high 13 tackles. Friday: at Pitman.

7. (7) Sierra (6-2, 2-2): The Timberwolves bounced back from a error-filled loss at Oakdale with a convincing win over crosstown rival East Union. The victory puts a little wind in the Timberwolves' sails as they look to punch a hole in Manteca's championship hopes. Friday: vs. Manteca.

8. (9) Atwater (6-2, 3-1): The Falcons have been tested the last two weeks in the Central California Conference, including a 41-35 overtime win at Golden Valley and a shootout loss at home against Patterson. The turbulence sets up the toughest part of the Falcons' schedule -- back to back bowl games against Merced, its longtime Santa Fe dance partner, and Bloss Bowl rival Buhach Colony in Week 10. Friday: at Merced.

9. (nr) Merced (4-4, 3-1): Led by senior Desmond Thompson, a fast-action player with leadership qualities that extend beyond the football field, the Bears have won three of their last four games to vault back into the large-school top-10 and Sac-Joaquin Section playoff picture. Merced's only loss during that stretch was a thrilling defeat to No. 2 Buhach Colony, 26-22. Friday: vs. Atwater.

10. (nr) Davis (7-1, 4-1): The Spartans are part of a four-way logjam atop the Western Athletic Conference standings, joining Los Banos, Beyer and Johansen at 4-1. Davis locks horns with the latter on Friday evening. Quarterback Elijah Diaz was named the American Chevrolet Athlete of the Week after racking up more than 300 yards of total offense in a win over Beyer. Friday: at Johansen.