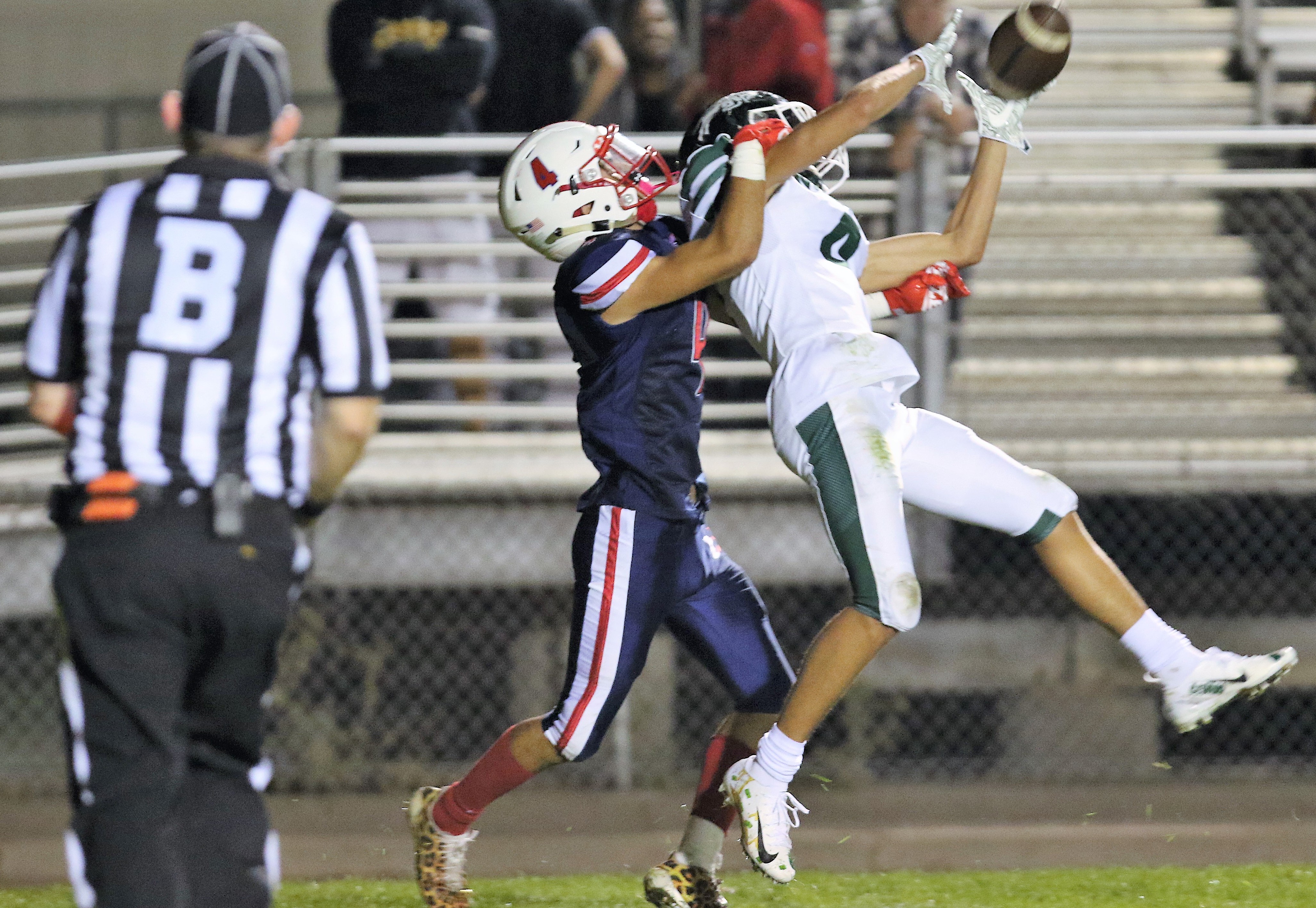 Manteca wide receiver Jorge Cedano hauls in a touchdown against East Union in a rivalry win on Oct. 26, 2018. Cedano and the Buffaloes have won seven straight section playoff games, but will be tested on the road at Antelope. (Sean Kahler)

Second to none: The 10 most intriguing Sac-Joaquin Section playoff matchups

The Sac-Joaquin Section playoffs continue Friday with second-round matchups from Sacramento to Merced. In no particular order, here are 10 intriguing matchups involving teams from the FrontRowPreps.com region:

The Bulldogs have posted back-to-back shutouts and appear in the second round of the Division I playoffs for the second time in three years. A defense led by San Diego State-bound defensive end Garrett Fountain has been described as "generational" and this will be the ultimate test. Oak Ridge is D-I heavy. The Trojans have reached the semifinal round the last four years, and in 2017 that journey included a victory over Gregori in the second round.

The Knights finally solved the Grant conundrum with a 57-27 victory last week, becoming the first Modesto City Schools program to win a playoff road game since 1999. Bryce Gouker and Anderson Grover owned the night, connecting on three touchdown passes as the Knights raced out to a big halftime lead. Downey had lost two straight to the Sacramento power. Now comes another seemingly impossible task — undefeated Inderkum and another dubious playoff drought. The Tigers have reached the semifinal round in seven of the last eight years, while the Knights seek their first Final Four appearance since 1985.

The Raiders have shown an improved passing offense with transfer Dalton Durossette, who torched Valley Oak League rival Oakdale in the regular season finale. Quarterback beware, though, because the Thundering Herd possess a rising junior defensive back, Khalani Riddick, who had nine tackles and three interceptions in a 28-21 upset of No. 7 Vacaville.

The six-time section champion Buffaloes have won seven consecutive section playoff games, but will face a unique test against the Titans in the second round. Manteca was a top-two seed en route to a Division IV crown in 2016 and a D-III banner in 2017, which meant home games until the final. This week, the Buffaloes' bid at a three-peat hits the road.

Rarely are the gates locked at The Corral during the second round of the section playoffs, but this has been an off-script season for the Mustangs, rarely the underdog. Oakdale seeks its 10th semifinal appearance in the last 12 years, but CalPreps.com believes Wood of Vacaville will narrowly avoid the upset.

The Wildcats have won six consecutive games, erasing a horrific 0-4 start. Sonora began the season No. 1 in the small-school poll, but tumbled out of the top-10 following a loss to Hilmar. Doomed mostly by injury, the Wildcats are healthy and gunning for their fifth straight semifinal appearance. Foothill possesses an electric offense, but may be hard-pressed to slow down Jake Gookin, Sonora's running quarterback.

The Indians fly into the postseason after clinching a share of the Trans-Valley League championship on the final night of the regular season. Ripon rallied from 15 points down to stun previously unbeaten Modesto Christian. Unlike last season, when Ripon earned a share of the TVL title but was made a lower seed and forced to travel, the Indians have the luxury of a home game and two weeks to prepare for the Mustangs, the Western Athletic Conference tri-champion.

The Knights had anticipated a rematch in the second round. They just didn't expect it would be against the Wildcats, a Southern League foe who scored 31 unanswered points in the final minutes of the fourth quarter to stun Rio Vista, the team that whipped Ripon Christian in the D-VII final last fall. The Knights won their first meeting with Waterford on Sept. 14, 42-6.

In another rematch, Calaveras looks to atone for an early-season loss to Escalon. The Cougars defeated Calaveras, a Mother Lode League heavyweight, 21-7. It was one of three consecutive losses to start the season for Calaveras, which has improved steadily as the season progressed. Calaveras draws confidence from its run game. Led by 6-foot-2, 190-pound senior John Arbuckle, Jason Weatherby's group averaged nearly 9 yards per carry in a 44-7 victory over Highlands last week.

In his second season, coach Brian Berkefeld has witnessed a dramatic change in his program. Last fall, the Lions limped into the postseason with major injuries and suffered from a bit of football fatigue. This season, Berkefeld is convinced his team is built for a section championship run — and it begins with a bit of history. Big Valley Christian, which will suit up 29 players for the first time all season, will host its first-ever semifinal game.