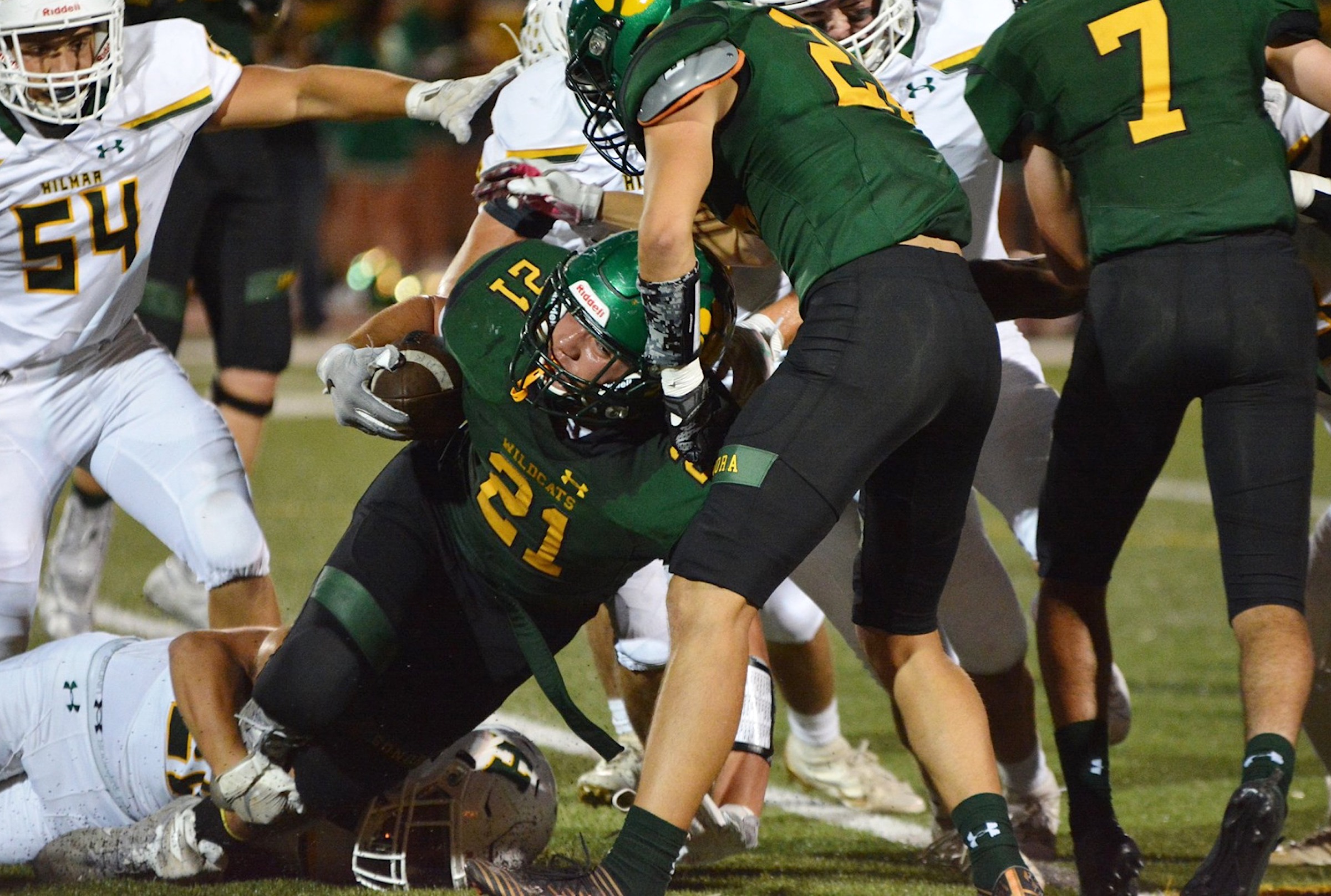 Sonora's Mike McKernon fights for a few more yards during a loss to Hilmar on Sept. 13 that left the Wildcats at 0-4. Since then, Sonora has won four straight games to vault to No. 5 in the Top 10, two spots behind Hilmar. (AnnaMarie Silveira)

Shakin' up the small Top 10: Sonora back from the dead and there's a new No. 1

1. (3) Ripon (7-1, 3-1): The Indians supplant Escalon atop the poll after drubbing the state No. 1, 42-21, showcasing a strong finishing kick and a healthy roster. The return of quarterback Nico Ilardi (knee) and two-way talent Grant Wiebe (shoulder) helped propel Ripon to the signature win, but the big plays by Danny Hernandez can't be overlooked. He's been a stabilizing force on both sides of the ball. Friday: at Hughson.

2. (1) Escalon (7-1, 3-1): Kaden Christensen ripped off two long runs, including an 82-yard scoring jaunt on the team's second play from scrimmage. Those were the highlights for the Cougars, who don't fall far following their first loss of the season. Led by Christensen, Escalon achieved the perfect start, rocketing out to a 14-0 lead, but they couldn't hold on as the Indians stormed back. Friday: at Livingston.

3. (2) Hilmar (7-1, 3-1): The Yellowjackets were awarded a 2-0 forfeit win over Modesto Christian. In the argument for who deserves top billing in the TVL, Hilmar owns an early victory over a Ripon team beset by injury, but has a 13-point loss to Escalon and a negative point differential in the head-to-head breakdown. Ripon has the best point differential at plus-10, while Escalon (minus-8) and Hilmar (minus-2) trail with negative differentials. Friday: vs. Riverbank.

4. (4) Ripon Christian (7-1, 5-0): The Knights have shut out four of their five opponents, including Orestimba, Gustine and Mariposa in succession to reprise their role as one of the stingiest defenses in the Sac-Joaquin Section, regardless of division. The Knights are cruising toward a second consecutive Southern League title and a berth in the Sac-Joaquin Section Division VI postseason. Friday: vs. Le Grand.

5. (nr) Sonora (4-4, 3-0): The Wildcats have won four straight and vault into the Top 10 after whipping Calaveras, 35-7, one week after Calaveras handed Amador its first loss. Talk about misdirection: While many believed Amador and Calaveras would usurp five-time defending champion Sonora in the Mother Lode League, the Wildcats proved otherwise with Friday's performance. Friday: at Amador.

6. (4) Calaveras (5-3, 2-1): After executing an impressive road win at Amador High, shaking up the Top 10 and seemingly grabbing control of the MLL, Calaveras came out flat at Dunlavy Field and was stung by rival Sonora. Friday: vs. Argonaut.

7. (6) Amador (7-1, 2-1): The Buffaloes can forge a title share in the MLL with a victory over Sonora. Though Amador trails the Wildcats in the standings, CalPreps.com had made the Buffaloes a 17-point favorite on Friday evening. Friday: vs. Sonora.

8. (7) Livingston (6-2, 3-1): The Wolves have won two straight, clinching the best regular-season finish in coach Alex Gonzalez's six seasons regardless of the final two week's results. Livingston will be heavy underdogs in those games against Escalon and Hilmar, respectively. The six wins are the most since 2011. Friday: vs. Escalon.

9. (8) Denair (6-2, 4-1): Jorge Yanez found the end zone twice and Dylan De Silva completed the scoring for the Coyotes, who ran their winning streak to three games with a 21-8 victory over Delhi. Friday: vs. Mariposa.

10. (9) Mariposa (5-3, 4-1): The Grizzlies were blanked by Ripon Christian, but hang inside the Top 10 because of their body of work. Mariposa owns a victory over Orestimba, which beat Top 10 regular Hughson (who was dropped to make room for Sonora). Friday: at Denair.