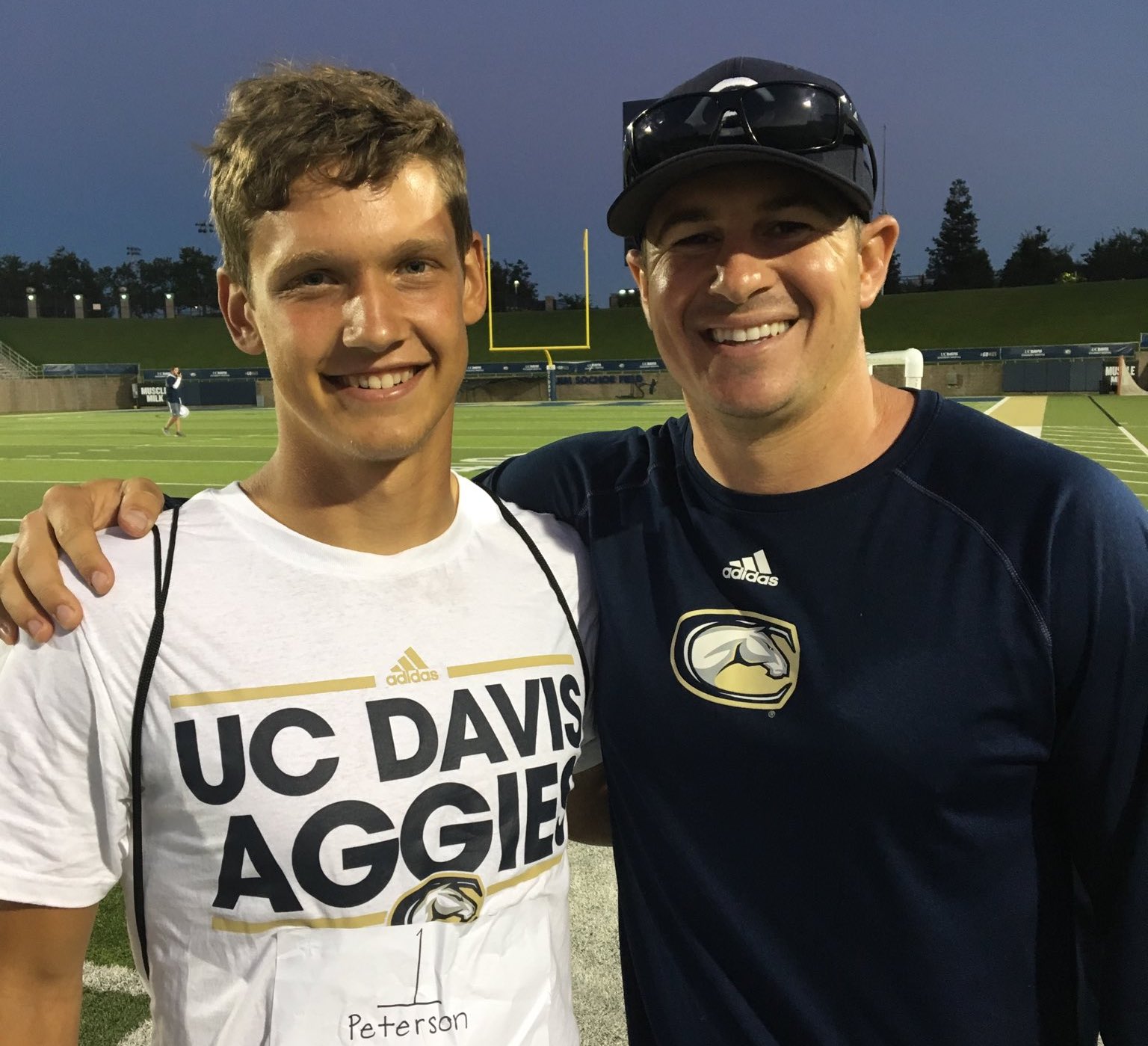 Before his first snap as a Downey High quarterback, Bryce Peterson was being compared to some of the program’s all-time greats.

He would obliterate all of Aaron Zwhalen’s passing marks and follow the Southern Utah gunslinger down a Division-I path, the narrative went. He'd also shred defenses with his feet, stirring up images of P.J. Wilson, another collegiate quarterback.

In 2017, Peterson, finally taking the reins from another standout, Brett Neves, appeared ready to fulfill the prophesy; ready to rise above expectation.

In his first season at the helm of the explosive, pass-happy “Air Raid” attack, Peterson threw for nearly 3,000 yards and accounted for 36 touchdowns.

However, he finished the season with pain in his throwing shoulder and didn’t play QB in the Knights’ season-ending loss to Rocklin in the first round of the Sac-Joaquin Section Division II playoffs.

“Something happened to my shoulder against Gregori (in the regular-season finale), but I’m not sure what happened,’ Peterson said. “It only hurts when I throw. I’ve done some rehab and throw a little bit, but I’m not where I can perform at my best.”

Even as Peterson was enjoying a breakout junior season, reality set in: He didn’t have the body of a prototypical college quarterback, and the window to showcase his abilities elsewhere on the field was quickly closing.

So this fall, the chosen one will carve out his own legacy in an offense long dominated by those with big arms and tight spirals. The “Air Raid” will introduce its third quarterback in three years — a rarity during Plaa’s tenure — but the spotlight will remain fixed on the 6-foot, 170-pound Peterson.

If it can find him.

Plaa plans to use Peterson in a variety of ways, maximizing his athleticism, football acumen and sheer playmaking ability as the Knights, once the kings of the now-defunct Modesto Metro Conference, embark on a new quest.

It’s a significant step for the Modesto City Schools programs, and Downey’s nerves are settled with the sight of Peterson healthy and eager to impress.

“It’s a big step,” Peterson said of the invitation to the CCAL. “Our coaches tell us that we can’t go through practice lazy. We have to push each other to go harder. (The CCAL is) not going to be a walk-through. We know the other teams are new to this league, too, and there out there working.”

Peterson will wear every hat for the Knights. Offensively, Plaa said he may break the huddle as a wide receiver, running back or quarterback. Defensively, he’ll be used to shore up the secondary, either locking up on a wide receiver or protecting the deeper spaces.

“Playing quarterback has helped because I know what all the wide receivers should be doing,” he said, “and on the defensive side of the ball, I know the process the quarterback has to go through on each play. I’ll know what he’s thinking and be able to read him faster.”

The summer season has made them all — Peterson, Plaa and the Downey staff  — look like geniuses.

Peterson was named the Offensive MVP at the UC Davis skills camp in June, reassuring everyone in Downey’s camp that the decision to unleash Peterson was wise.

“I love to compete,” Peterson said. “When we do 1-on-1s and match up, I go to the line of scrimmage and know I have to beat the guy in front of me. That motivates me.”

He is no stranger to wide receiver. Peterson’s first taste of the varsity game was as an emergency call-up during his sophomore season. Plaa asked him to fill a void left by wide receiver Trevor Farris, who suffered a season-ending injury in the season opener.

Peterson finished the season with 201 yards and two touchdowns on 17 catches. He averaged more than 11 yards per catch and had a season-high 93 yards and two TDs in a 45-12 victory over Johansen.

Even with a new face under center — Downey must choose between junior Bryce Gouker or freshman Beau Green — Peterson believes he can continue to fill up the stat sheet.

“I like them both,” Peterson said of his possible successors. “They have their own gifts at the position. I wouldn’t mind having either one at quarterback.”