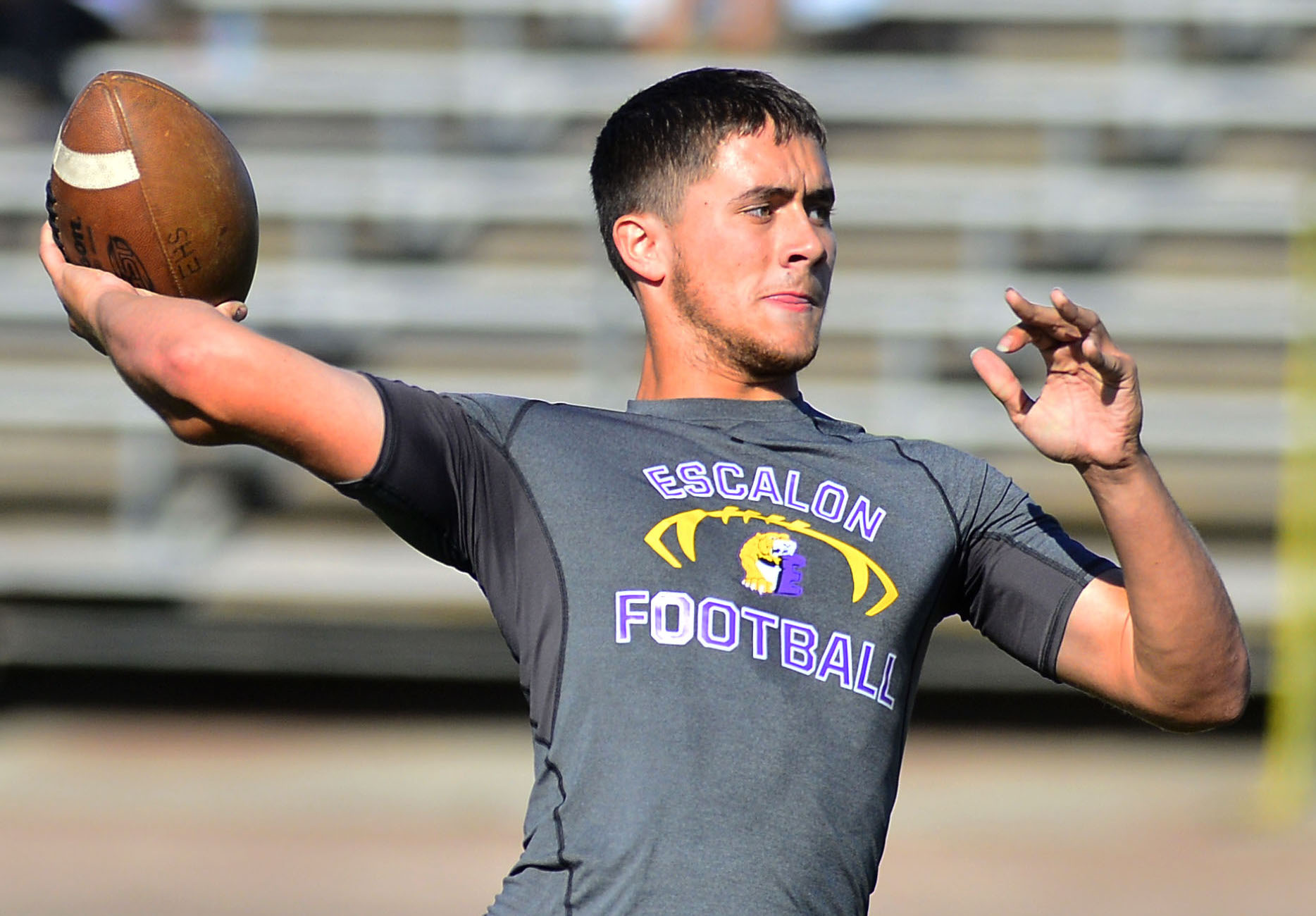 Escalon High's Lucciano Dutra fires a pass during a passing tournament at Downey High over the summer. Dutra and the Cougars are No. 3 in the Front Row's preseason small-school poll. (John Westberg)

Small-school rankings: Sonora still No. 1, but which conference is the deepest?

The Front Row's small-school top-10 rankings may be up for debate, but the No. 1 spot is not.

The Sonora High football team retains its position atop the expanded rankings. The Wildcats are the four-time defending champion in the Mother Lode and with a cast of all-league performers back in the fold, they should face little resistance this fall.

The Trans-Valley League is the deepest of the region’s small-school leagues. No. 2 Ripon, No. 3 Escalon and No. 4 Modesto Christian shared the 2017 league title and together, they crowd the top-five. A fourth TVL team, Hilmar, debuts at No. 6 but has a strong case to be ranked ahead of the returning TVL kings. Hilmar edged Escalon in a thrilling playoff game -- Mark Loureiro's last as the Cougars' coach -- and then whipped Modesto Christian in the section final.

1. Sonora (9-3): The Wildcats possess the deepest collection of talent at the small-school level and a pedigree of success. Over the last four years, Sonora has averaged more than 10 wins. Season opener: at Oakdale, Aug. 17.

2. Ripon (8-4): The Indians were carried to a share of the TVL title in 2017 by seniors Michael Winters and Cameron Gamino, the league’s offensive and defensive players of the year. This fall, quarterback Ryan Daggett and defensive back Justin Hansen take the baton. Season opener: vs. Weston Ranch, Aug. 17.

3. Escalon (7-5): The Cougars return an electric talent in running back/defensive back Kaden Christensen, who was under-utilized a season ago. First-year coach Andrew Beam will find a way to maximize Christensen’s touches, but can the promising senior withstand the rigors and physicality? Season opener: at Union Mine, Aug. 17.

4. Modesto Christian (7-6): The Crusaders will roster less than 20 players, but more than half constitute a decorated and driven senior class. It’s the largest senior class since Mike Parsons returned as head coach. Season opener: vs. Sierra, Aug. 17.

5. Orestimba (10-1): The Warriors are the prohibitive favorite in the Southern League for a fourth consecutive year thanks in large part to the experience under center. Jacob Bettencourt will be the triggerman for an offense as potent as any at this level. Season opener: at Bret Harte, Aug. 17.

6. Hilmar (8-6): The Yellowjackets caught lightning in a bottle late last season and finished with a bang, capturing the Division VI section title and hosting a CIF State Northern California regional bowl play-in game. Speaking of lightning, Hilmar will roll out a lightning-and-thunder running back duo in Isaac Sharp and Justin Rentfro. Season opener: at Delhi, Aug. 17.

7. Ripon Christian (7-5): The Knights reached a Sac-Joaquin Section final for the second time in five seasons only to have their spirits crushed by Rio Vista, 56-28. Can an addition to the coaching staff put them over the top? Randy Fasani has returned to call the offense for his good friend Trey Ozenbaugh. Season opener: vs. Millennium, Aug. 17.

8. Calaveras (9-2): For the first time in four years, the Calaveras offense won’t feature a Byrd (Dylan and Kyle) at quarterback. That era is over, giving new stars a chance to create their own legacy at one of the most successful small-school programs in the last decade. Season opener: at Escalon, Aug. 24.

9. Gustine (8-3): In his first season at the helm, coach Ronnie LaBry guided Gustine to an eight-win season and a postseason berth. How he fares in Year 2 may depend on the team’s leading returning rusher, Brandon Garbez, who averaged nearly 7 yards per carry. Season opener: vs. Linden, Aug. 24.

10. Big Valley Christian (9-2): The Lions boast an experienced backfield with the return of quarterback Gunnar Selover and running back Javyn Drobnick, who has a shot at joining the region’s most exclusive club — 2,000-yard rushers. He was well on his way last fall and then a neck injury in Week 10 shortened his season. Season opener: at Harker (San Jose), Aug. 17.