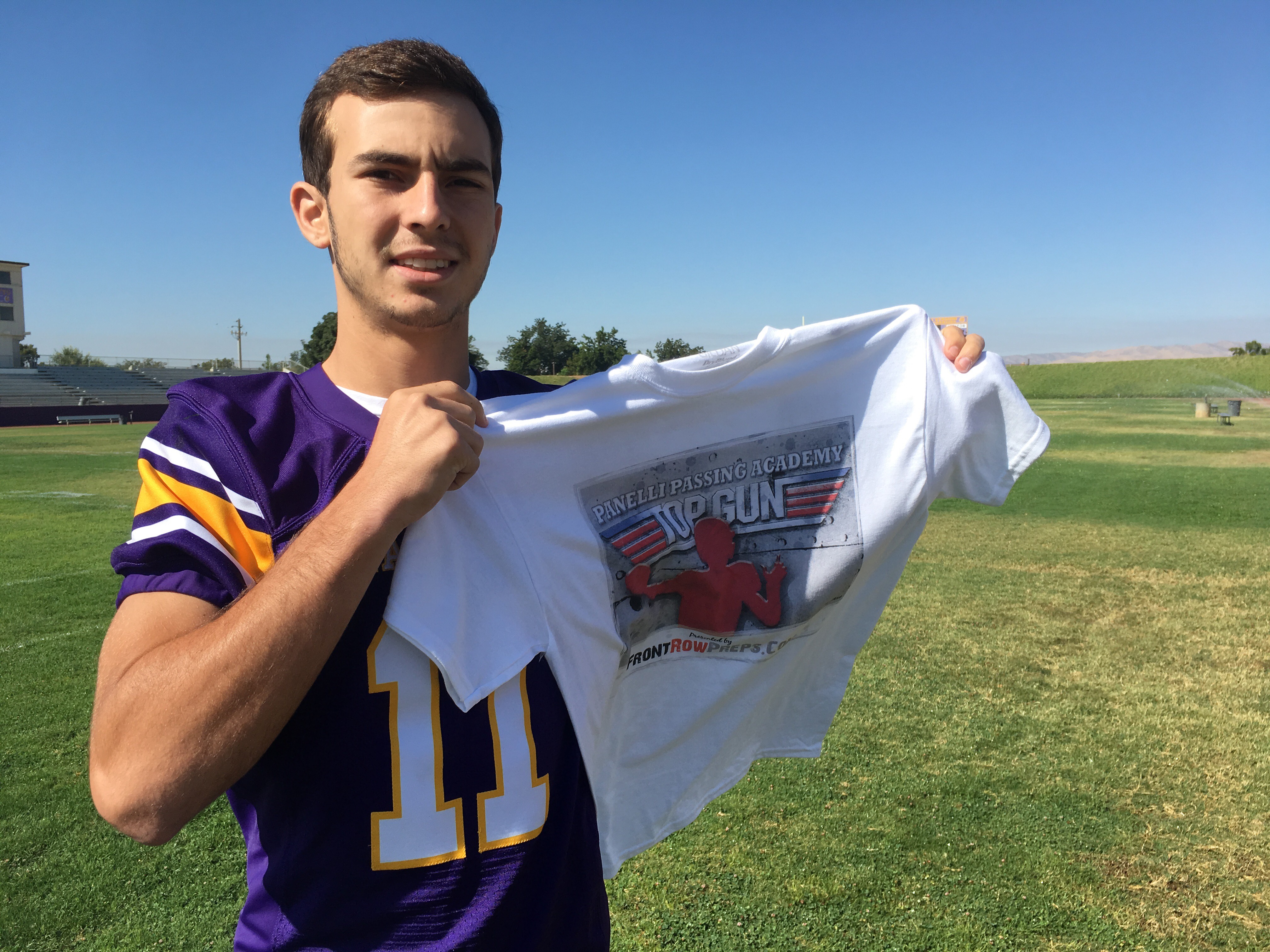 Orestimba quarterback Jacob Bettencourt holds up his Panelli Passing Acadamy Top Gun T-shirt, his reward for a four-touchdown performance in the Warriors' 27-24 win over Hughson on Friday, Aug. 24, 2018. (James Burns)

NEWMAN — Jacob Bettencourt doesn’t consider himself much of a running quarterback, but the game film from third-ranked Orestimba’s 27-24 victory over Hughson would suggest otherwise.

"We were joking around as a staff on the headsets, saying that you were showing glimpses of Joe Sheldon running the football," Orestimba coach Aaron Souza said. "The way you broke the pocket and took off on that run, I hadn't seen that out of you."

“I really wouldn’t consider myself much of a dual-threat; I’m not much of a runner,” said Bettencourt, who completed 16 of his 34 passes with one interception. His completion percentage should have been better, but Bettencourt's numbers were skewed by five dropped passes.

“I’m usually throwing it into the end zone and not running it. One was a read-option and the other was a bootleg. Coach Louie (Dominguez, offensive coordinator) just made great calls.”

Bettencourt joined James Burns in the Front Row on Wednesday morning to talk about his sneaky speed, his confidence in the offense and growing legend on campus.

FR: Last fall, you threatened Bryan Black’s single-season passing records, established in 2001. How do you handle the pressure that comes with playing at Orestimba, a three-time Southern League champion, and chasing program records like Black's?

JB: I don’t pay attention to it much. We just go out there and play football. We do a good job of not paying attention to what is said about us. It would be nice to get the records, but at the end of the day I just care about winning.

FR: Is it nice playing with the confidence of the coaching staff, knowing they’ll allow you to affect a game with your arm and your eyes?

JB: I can really do what I want out there. If I see something out there I don’t like, I can switch a play. Even within plays I have options — throwing the ball, keeping it or giving it. It’s a nice offense to be in.

FR: Give our readers a sense of how much time is invested into being the starting quarterback for a championship-caliber team.

JB: I’ve been doing it my entire life. It just comes natural to me, coming out here everyday during the summer with my guys to throw. They love putting in the work, just as much as I do.

FR: You’ve worked with Greg Panelli of Panelli Passing Academy and you’re well aware of the talent in the region. What’s it mean to you to be recognized with this award?