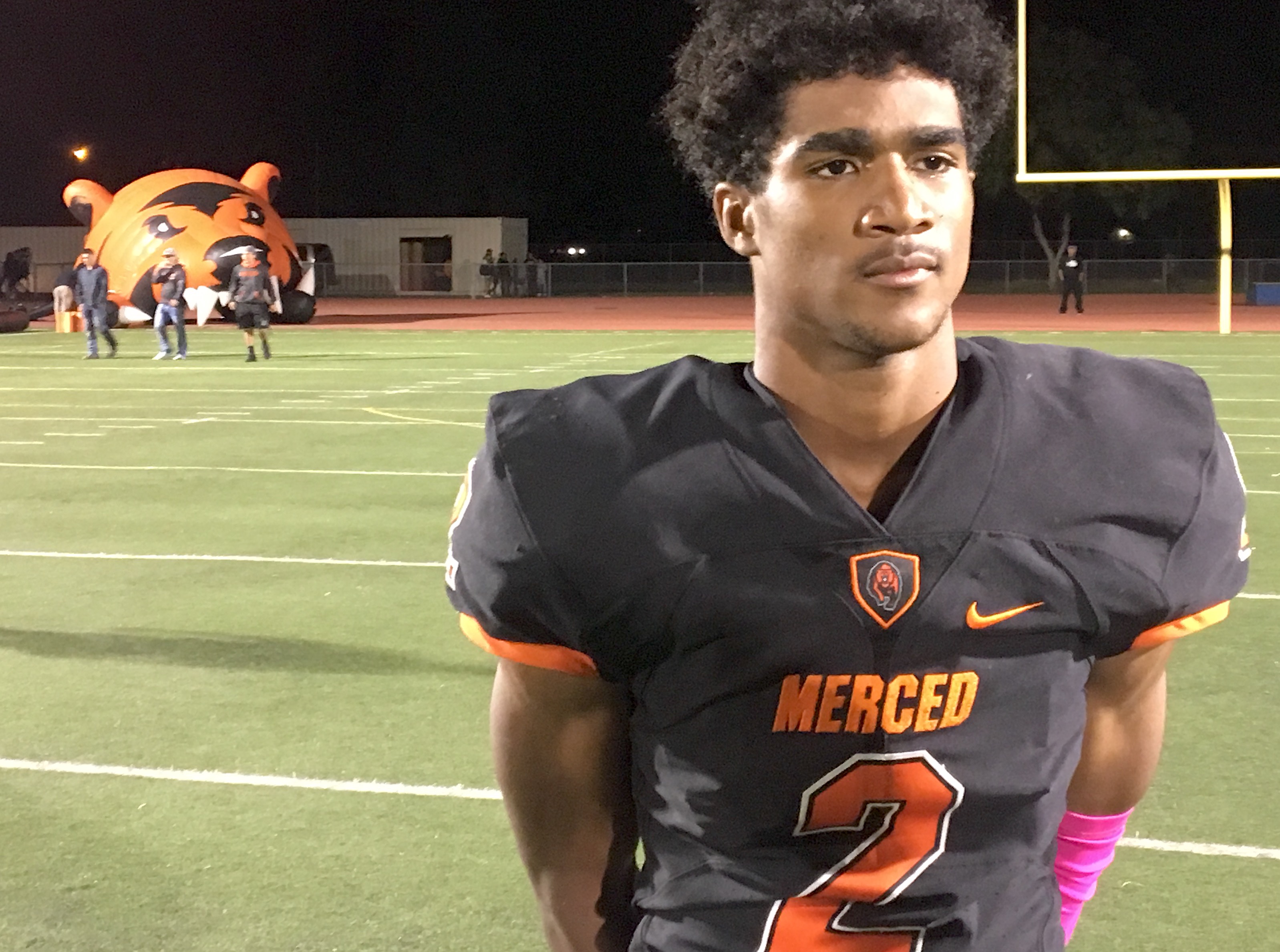 'So unselfish, so in tune.' After flattening Buhach, can anyone stop Merced?

MERCED – Once the Merced High offense got rolling on Friday night, there was no slowing it down.

A Bear offense that entered the evening averaging 472.5 yards and 51.5 points per game, took offensive execution to a whole new level during the final 40 minutes at Veterans Stadium.

After turning the ball over on downs on its opening possession, Merced closed the game with seven touchdowns in as many possessions to turn what was considered the unofficial Central California Conference title bout into a 55-14 rout of Buhach Colony.

“We’re so unselfish and so in tune with what we’re doing right now,” Merced coach Rob Scheidt said. “My every moving part, and we have a lot of moving parts, is doing their job. It’s just awesome to coach these guys right now.

“As a coach going into a big game, we tend to start to doubt. Can we do this or that? I told these guys this week, I just trust them. There was never any doubt. I never got nervous today. And they went out and executed.”

The Bears (7-0, 3-0 CCC) grabbed control of the game with their final drive of the first half and the opening drive of the second.

After falling behind 14-0 on a pair of Junior Garcia (7 of 10 passing for 195 yards) touchdown passes to Xavier Stewart (three catches, 110 yards), the Thunder (5-2, 2-1 CCC) got a big answer to close the second quarter. Brandon Ruiz connected with Youlas Dickson III for a 23-yard touchdown pass to trim the lead to 14-7 with 1:17 to play in the half.

The Buhach Colony defense just needed a hold in the final minute plus to take the momentum into the break. It proved more than enough time for the quick-strike Merced offense, however.

The Bears needed just three plays to move the ball to the Thunder 5-yard line and then pulled out some trickeration as Dhameer Warren handed off to Stewart on a reverse. Stewart pulled up and tossed a 5-yard touchdown pass to a wide open Garcia to make it 21-7 at intermission.

Merced all but put the game away on the opening possession of the second half, marching down the field in five plays before Warren (80 passing yards, 111 rushing yards) ran it in from 18 yards out.

“I think that sequence really hurt,” Thunder coach Kevin Navarra said. “We had a chance to be down just 14-7 against an offense like that. Then to give up a long pass with a minute something left, when that’s what your trying to prevent, that definitely hurt our ego a little bit.

“We had no answer after that.”

The Bears tacked on a pair of second-half touchdowns each from Desmond Thompson (12 carries, 123 yards) and Misael Aguirre to bring about a running clock in the fourth quarter.

The Thunder added a consolation score as Ruiz hit Tramayne Paster for a 27-yard touchdown pass in the waning minutes.

“The game started out how we expected, a nice hard battle,” Stewart said. “Towards the end we just had more stamina and momentum than they did in the second half.”

This article was written by Sean Lynch, a former Merced Sun-Star reporter.