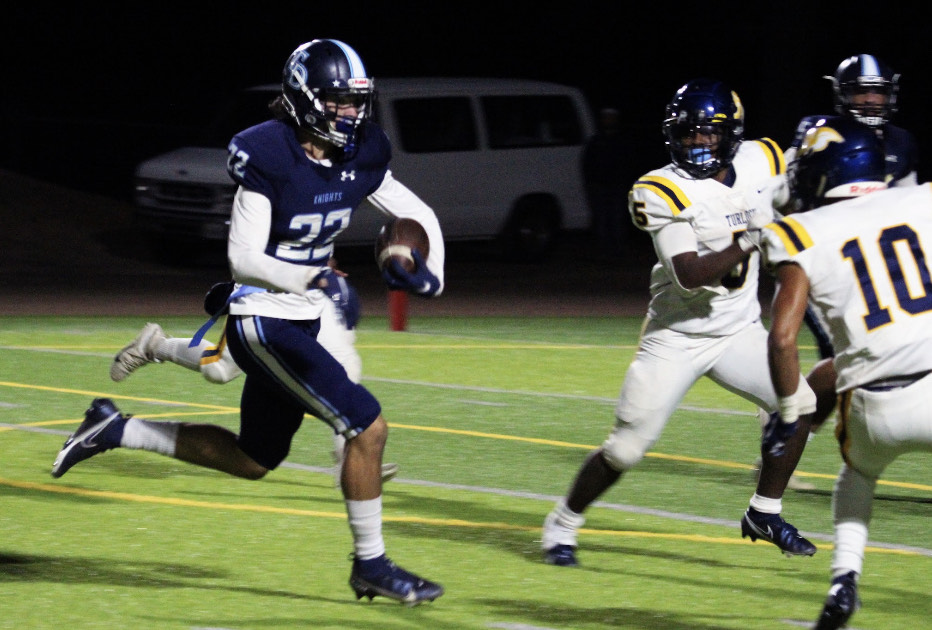 Downey High's David Jones had three interceptions to spearhead the defense in a 38-14 victory over Turlock on Friday, Oct. 8, 2021. (Samantha Schmidt)

'Someone had to get them': #4 Downey, coach Plaa deal 'Dogs rare league loss

The Downey Knights shouted a proverbial “Enough” and stopped Turlock’s 29-game streak with an emphatic 38-14 Central California Athletic League victory. The Bulldogs were removed from first place for the first time since Oct. 30, 2015, when they lost to Merced 34-28 in the Central California Conference.

“It had to be done,” Downey coach Jeremy Plaa said after his 99th career victory and his first-ever decision over Turlock. “Sooner or later, someone had to get ‘em. I’m happy we were the ones.”

The Knights, 0-3 vs. Turlock while the Bulldogs won their first 16 CCAL games, rode a blue wave of confidence as the first hint of fall required coats and sweaters at Chuck Hughes Stadium.

Tellingly, Downey – leading only 17-14 early in the fourth quarter -- went for the take-charge touchdown on fourth-and-goal. Quarterback Conner Stoddard, seeing no one open, raced six yards and stepped into the end zone standing up.

“I saw them playing man (man-to-man defense) and had an open lane,” said Stoddard, whose three late  touchdowns triggered a post-game celebration. “We’ve been wanting to beat them. It feels good to do it.”

Stoddard also passed for 225 yards, including a 20-yard scoring strike over the middle to Hayden Grant late in the first half.

Jones, appearing in his third game for Downey since his transfer from Beyer, weaved down the field for 82 return yards to set up 17 points. That he looked comfortable catching the ball and running with it was not a fluke. He was a slot receiver for the Patriots.

Jones set the game’s course with his leaping interception and 36-yard runback. Soon after, Elijah Reyneveld connected on a short field goal for a 3-0 lead that Downey never lost.

“I tried to focus on watching the receivers’ hips and see when he jabs,” Jones said. “I read the routes.”

Jones effectively guarded Turlock receiver Logan Hart most of the game. That said, Hart encouraged Turlock with a lightning bolt touchdown late in the first half.

The lob from quarterback Cole Gilbert appeared off-target, but the 6-foot-2 Hart somehow reached high and behind him and pulled it down with his left hand (he is lefthanded) near the Downey bench. He somehow kept his balance and completed the 68-yard touchdown sprint.

The score closed the Turlock deficit to 17-14, but the Downey defense stiffened. In fact, the Knights allowed only 52 yards the rest of the night. Elijah Stine (18 carries, 103 yards, TD) provided balance on offense for Downey, and there were no questions about the Knights’ sixth straight win.

“Turlock had maybe the best defense we’ve seen all year, but our defense was better tonight,” Plaa said. “I’m really proud of our guys.”

For the record, Turlock (2-5, 1-1) began its long run with 13 wins in the CCC and added 16 more in the newly-formed CCAL. The Bulldogs’ road to a sixth straight league title, however, hit a major speedbump. Turlock coach James Peterson feared a letdown after an easy win over Pitman last week in the Harvest Bowl.

“It was a heck of a win for them (Downey). They’re a good football team,” Peterson said. “Our team knows (about the streak). There was a lot of emotion last week…It didn’t seem like we had a lot of energy tonight.”

Most of the energy sprung from the Downey bench and a team (6-1, 2-0) now targeting its own goal.

“Our theme for the week was confidence,” Plaa said. “If we could play our best game, we could beat them. And that’s what happened.”