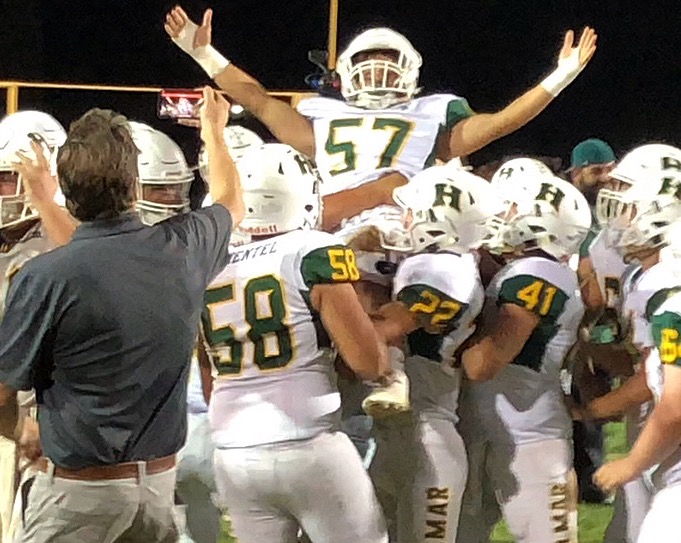 Hilmar's Miguel Padilla is carried off Engel Field on the shoulders of his teammates after lacing a game-winning field goal in the Yellowjackets' 20-7 victory on Sept. 21. (James Burns)

'It might be the best rivalry in the area.' Hilmar, Escalon brace for epic clash.

Thirteen years ago, Escalon High quarterback Andrew Beam stood tall on a windy afternoon in Stockton and escorted the Cougars into the record books.

Escalon, anchored by a pair of Beam-to-Jordan Ramirez touchdown passes, blanked previously unbeaten  Hilmar 23-0 to win the 2005 Sac-Joaquin Section Division IV title. Better still for the Cougars, they avenged an earlier 34-33 loss to the Yellowjackets and a one-man tour de force by quarterback Nate Costa.

Costa, who went on to a distinguished career at Oregon, compiled arguably the greatest performance by an opponent at Escalon’s Engel Field: 496 total yards and five touchdowns, the fifth on a one-yard sneak as time expired.

To no one’s surprise, Beam — now the first-year head coach at his alma mater — remembers it well.

“I’ll never forget how good Nate played against us that first game,” Beam said. “But we bounced back in the championship game. To shut out a Division I talent like Nate and finally redeem ourselves was special.”

On the opposite sideline that day was Frank Marques, who completed his third season as Hilmar coach. Thirteen years later, he still leads the Yellowjackets. Marques knows this intense rivalry from A to Z. He’s lived it.

“The towns are mirror images of one another and the football teams and the culture reflect that,” Marques said. “Both towns take their football seriously and have had great success.”

“How wild is that?” asked Beam, the successor to the iconic Mark Loureiro.

The Trans Valley League powers are bracing themselves for more drama. On Sept. 21, Hilmar backup kicker Miguel Padilla drilled a field goal in overtime to win 20-17. The year before — in what became Loureiro’s final game — Bryan Millan’s 34-yard field goal sent the Yellowjackets to the section finals 41-38.

“It could easily come down to a kick again,” Marques said. If so, Escalon’s Guillermo Alvarez and Millan (with Padilla a clutch pinch-hitter on the sideline) await.

That neither Hilmar and Escalon claimed the TVL title matters little. The Cougars and the Yellowjackets can’t wait for the next showdown.

Hilmar (9-2) has won five of six since its tough loss to co-champ Ripon, including a 44-6 romp over Amador two weeks ago. Running back Isaac Sharp (1,224 yards, 19 TDs) and quarterback Treven Crowley pace the Hilmar attack. Crowley, a junior, has progressed since his first start against Escalon.

Beam said sophomore QB Ty Harris, who was efficient in his varsity debut — a 39-15 victory over Calaveras two weeks ago — will start over senior Lucca Dutra.  Escalon has rolled over five straight opponents, by a combined 222-54, since its frustrating 7-6 loss to TVL co-champ Modesto Christian.

“We’ll ride with him (Harris). I like to stay with the same quarterback,” Beam said. “Both teams have gotten healthy over the layoff. It will come down to the little things — turnovers, field position and special teams.”

Marques and the Yellowjackets almost always trot out a strong kicker. Escalon, to its chagrin, can only agree.

In 2011, Hilmar seized a section title over Escalon 20-17 on an improbable final drive capped by Kurtis Bettencourt’s 41-yard field goal with 19.5 seconds left. Simply, Escalon and Hilmar are most comfortable trading body blows.

“We know them and they know us,” Marques said. “It might be the best rivalry in the area.”

Ron Agostini won regional and national awards as a sports writer and columnist during his 40-year career at The Modesto Bee. He retired in 2017.