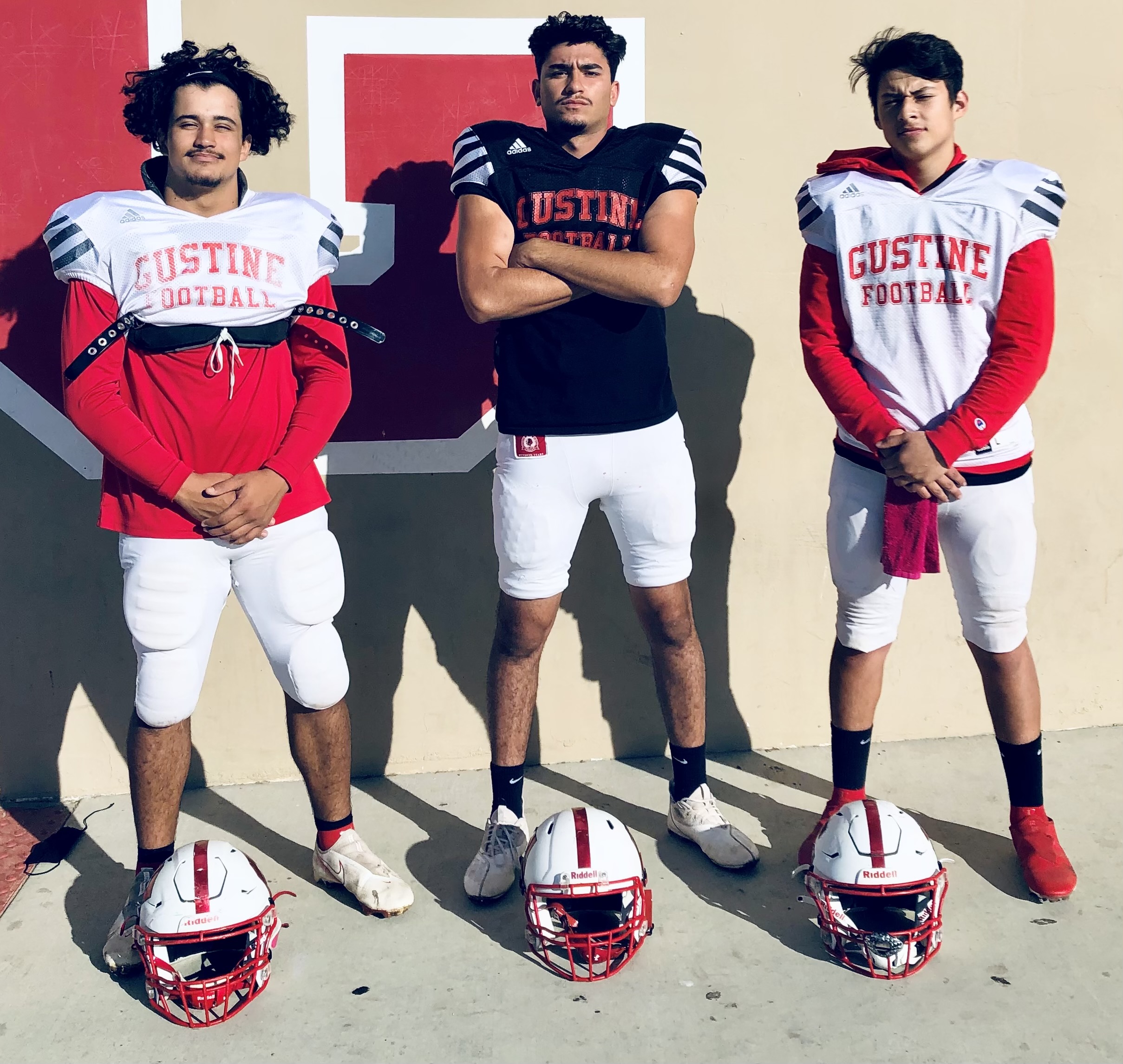 Mateo Gallichio, Geovanni Quezada and Danny Hernandez , left to right, have been the on-field catalysts for the Gustine football team, which hopes a late-season coaching change can boost their Sac-Joaquin Section playoff hopes.

GUSTINE — With its season hanging in the balance, a Southern League football program has called upon old generals to steer its Sac-Joaquin Section playoff push.

Paul Nocito is out as Gustine's head coach, less than a year after taking the reins from Ronnie Labry. Stepping back into the fire is ... Labry, who said he simply couldn't say no. He was rehired on Tuesday, Oct. 12, the same day Nocito was relieved of his assignment, giving Labry little time to assemble a staff and game plan for Le Grand.

"It wasn't working out and they decided to go a different route. I've been a part of this program for 10 years," said Labry, who coached from 2017-2020.  "I've known half of these kids since they had snot running through their noses (while) playing Pop Warner.

"I couldn't say no to the kids. The kids are a big part of this town."

Gustine isn't bringing back just one former head coach. In hiring Labry, Gustine has brought back its last three head coaches, including Russell McWilliams and Mike Mendonca, both of whom were introduced on Thursday, about 24 hours ahead of kickoff.

McWilliams, who will work with the linemen and defense, coached Gustine from 2011 to 2015 compiling a record of 13-27. After a few lean seasons, McWilliams orchestrated one of the finest campaigns in program history in 2015. Gustine was 10-2 -- its most wins in the MaxPreps era -- and reached the semifinal round of the Division VI playoffs.

Mendonca, an offensive assistant, was 5-5 in 2016, his only season as the head coach.

"We got the whole band back together," Labry said with a chuckle. "As a head coach, there's so much on the table. It's not just the game you're worried about, but everything else that goes with it. The way I coach, everyone has an equal part. I look at everybody like they're the head coach."

Gustine kept its playoff hopes alive with a thrilling double-overtime victory over Le Grand last Friday in Labry's debut. Senior Danny Hernandez had just enough leg on a game-winning 39-yard field to clinch a 31-28 win that stretched long into the night.

Quarterback Geovanni Quezada scored on a 9-yard run and tossed a 25-yard touchdown to Hernandez, who found the end zone twice. Quezada is a dual-threat quarterback, an ideal candidate to execute Gustine's run-pass options.

"We have some pretty talented kids. Geo took last year off and wished he didn't," Labry said, "but it's just made him hungrier. You've got to have a guy like that that can move for you. We run a lot of RPOs. They have to be able to read that. That's a big part of our system."

Zander Leyva also had a rushing touchdown for Gustine (3-4 overall), which has won three of its last four to join a logjam behind undefeated Waterford in the league standings. The Wildcats are 5-0, two games clear of Gustine, Mariposa and Le Grand, each 3-2. Ripon Christian is 2-2, while Orestimba is 2-3.

"Our goal is to make the playoffs. That's always been our goal," Labry said. "We don't overlook any team. Right now, it's Ripon Christian. They've always been tough. We can't let our guard down."

The Knights can empathize with Gustine. They engineered their best defensive performance of the season last Friday with a former head coach at the controls. Randy Fasani served as the interim head coach while Phil Grams sat out with a one-game suspension. The penalty came after Grams was ejected from a loss to Le Grand.

"I couldn't be in the vicinity, so the kids were fired up about that. They played inspired," Grams said. "It was a good night for us. We needed a good defensive game and the kids stepped up. It was fun to be with the guys after the game. It was exciting."

Though Gustine isn't doing anything differently, schematically, Grams acknowledged the emotional lift Labry, McWilliams and Mendoza may have on the players in their locker room.

"Look at them on film, they look the same as before. There are not a lot of differences from what they were then to what they are now," Grams said. "But, they definitely played fired up. Watching that game, Le Grand shot themselves in the foot quite a bit. This year, there are good teams in the Southern League and anybody can beat anybody any week."