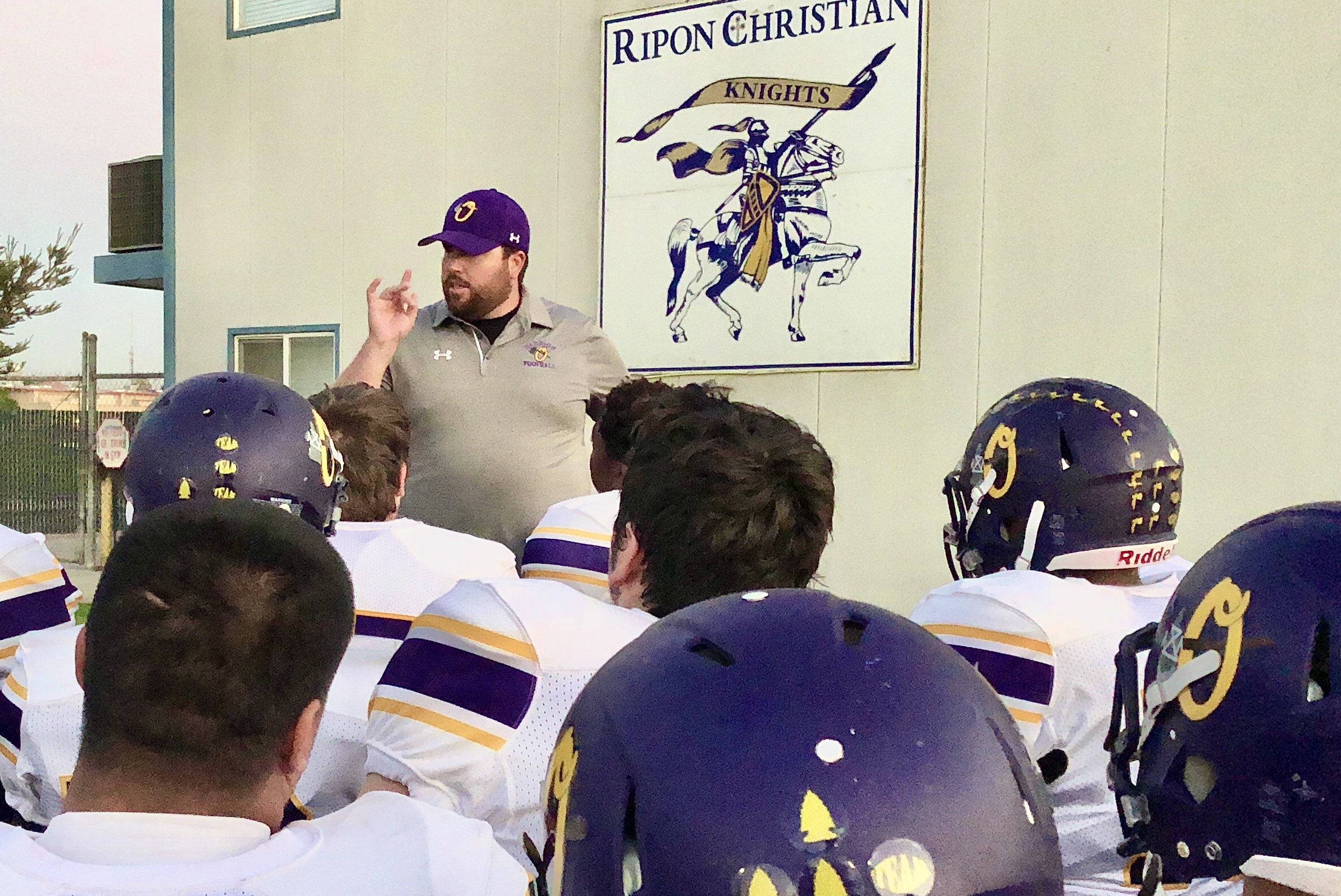 Orestimba coach Aaron Souza talks to his team before a 23-17 loss at Ripon Christian on Sept. 28, 2018, in Ripon. The Warriors led 17-8 going into the fourth quarter.

Southern Spotlight: No. 5 RC renews its rivalry with No. 10 Orestimba on Friday

1. (1) Escalon (5-0): Colton Panero and the Cougars annexed a year’s worth of frustration with a 34-21 victory over Hilmar. Panero was the hero, running around, through and away from the Yellowjackets for 145 yards and a touchdown. He was the team’s leading rusher and receiver, amassing 187 total yards. Friday: vs. Modesto Christian.

2. (2) Hilmar (5-1): The Yellowjackets were outscored 20-7 in the first and fourth quarters in a loss to the Cougars. Junior quarterback Seth Miguel kept Hilmar in the contest, though, throwing three touchdowns against no interceptions. Friday: bye.

3. (3) Amador (5-0): The Buffaloes -- not five-time defending champion Sonora -- are the favorites as the Mother Lode League gets under way. Amador is 5-0 and hasn’t scored fewer than 41 points in its last four games, including a 42-9 victory over El Dorado last week.  Saturday: at Bret Harte.

5. (5) Ripon Christian (4-1): Sean McGovern put together one of the more remarkable all-around performances of the season in a 28-7 statement-sending win over Denair. McGovern, the American Chevrolet Athlete of the Week, rushed for 160 yards and two touchdowns; reeled in three receptions for 57 yards and another score; and recorded 17 tackles and an interception. Friday: at Orestimba.

6. (7) Calaveras (3-2): Calaveras rolls into Mother Lode League play on a two-game winning streak after a choppy 34-8 win over Stellar Prep. Clayton Moore rushed for 170 yards, but he wasn’t the statistical star. That honor belonged to the officiating crew, who, according to the Calaveras Enterprise, doled out 21 penalties and aided in a 45-minute delay. Friday: vs. Summerville.

8. (6) Denair (3-2): Dylan De Silva scored the Coyotes’ only points in a loss to Ripon Christian in their Southern League opener. The loss shouldn’t deter Denair, who suffered the same setback before rolling to Sac-Joaquin Section and CIF State banners. Friday: vs. Gustine.

9. (9) Hughson (3-3): The Huskies routed Modesto Christian, 54-0. It’s the first time Hughson has beaten the Crusaders since 2008, a stretch of 11 games. The Huskies travel to Riverbank before a daunting stretch against the TVL’s elite to close the season. Friday: at Riverbank.

10. (10) Orestimba (3-2): So anemic in a loss to Mariposa, Orestimba’s much-maligned offense came to life in a rout of Le Grand. Wide receiver Jayden Vargas had 134 yards and a touchdown, while running back Xavier Avila also topped 100 yards rushing. Friday: vs. Ripon Christian.