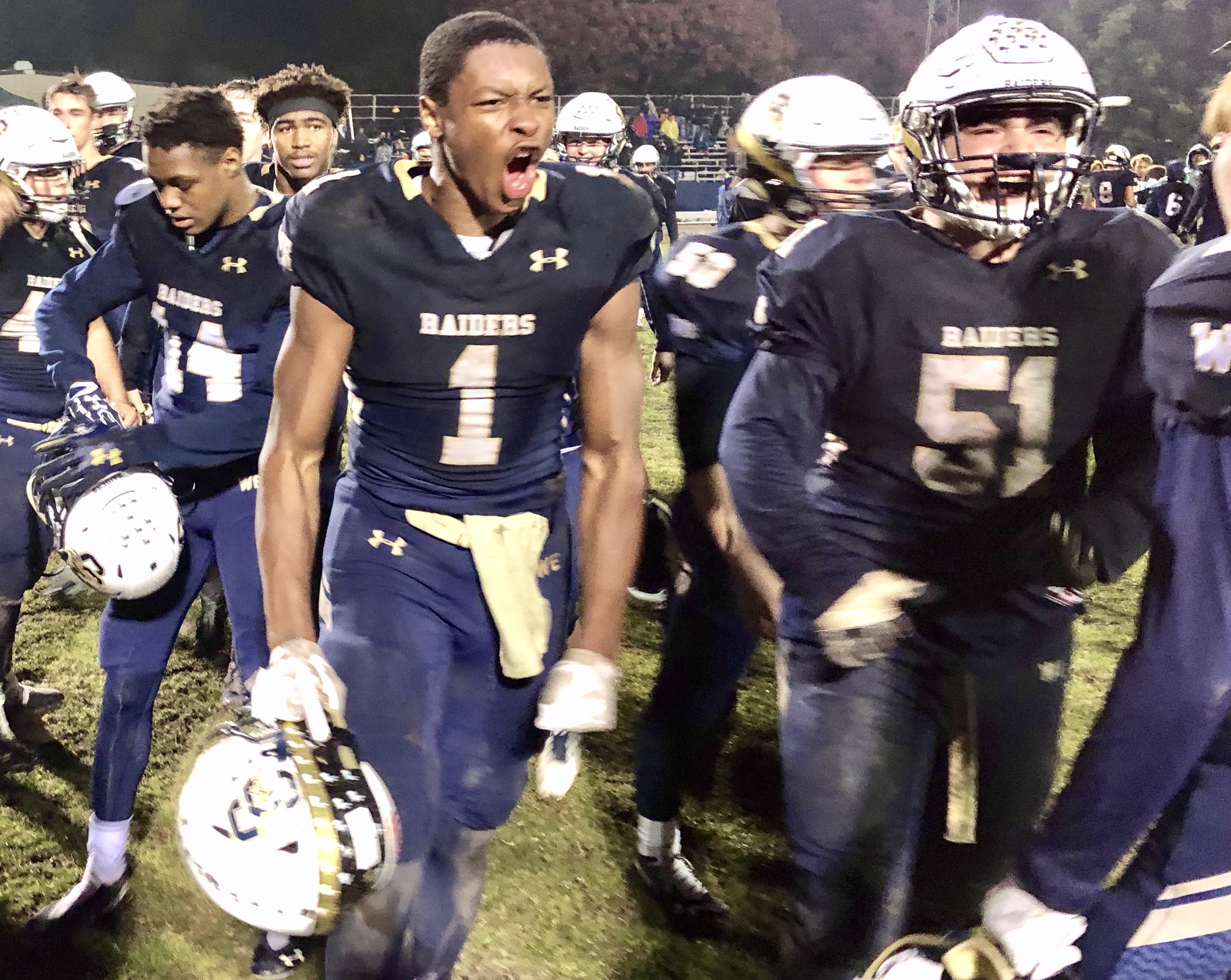 Central Catholic running back Dawaiian McNeely and his teammates celebrate a come-from-behind 31-30 victory over Inderkum in the Sac-Joaquin Section Division II semifinal on Nov. 23, 2018. (James Burns)

That fall, the Raiders engineered one of the greatest seasons in regional history, finishing 16-0 and draped in section and CIF State banners.

Since then, though, Central Catholic, a school with fewer than 400 students, has been humbled by its promotion to Division II. The lessons have been handed down by heavyweights and stalwarts, too: Jesuit in a 2016 quarterfinal, 42-14; and Del Oro in a 23-12 loss in last season's semifinal.

On Friday evening, under a steady rain, the title-starved Raiders sent a chilling message up Highway 99 toward Del Oro of Loomis, its dance partner in next week’s Division II final: “We’re baaack!” went the cheer.

Central Catholic punched its ticket with a come-from-behind 31-30 victory at David Patton Field, overcoming a disastrous first half and the loss of two key playmakers. The second-seeded Raiders (11-1) trailed 24-12 at the intermission, but handed No. 3 Inderkum (11-1) its first loss with an about-face in the second half.

“I give the kids credit. I don’t think we did a good job coaching," said Central Catholic coach Roger Canepa, who has guided the Raiders to five section final appearances in 11 seasons. "We did a good job to get them to this point and their heart won. We were way out of sorts, but we won. That is a game we could have lost easily … if you don’t have heart.”

McNeely sparked the comeback with an 80-yard touchdown run on the first offensive play of the second half and Jacklich, a tireless performer, found the end zone twice, providing the eventual game-winning score with 11:38 left in the game.

Jacklich, annoyed by an ankle tweak since Week 10, scored on runs of 27 and 5 yards, and both were feats of strength. He finished his 27-yard gallop with a stiff arm near the goal line, and then bowled over a bigger, stronger defender to make it 31-24 early in the fourth.

“I’m not that big, but I run hard. I don’t give up. I’m going to keep my feet pumping,” Jacklich said. “My dad has always taught me that they bigger they are, the harder they fall. That’s something I live by."

Jacklich was thrust into a starring role after running back and safety Minaya Olivo left the game with a leg injury following a 21-yard run. On the next possession, wide receiver/defensive back Sithri Price had to be carried off the field. He was later taken to the hospital by ambulance with an undisclosed injury.

Olivo, a late-season revelation after missing more than a month with a concussion, limped back onto the field after halftime but did not play in the second half. The injuries galvanized the locker room, Jacklich said.

“We knew that we didn’t want this to be our last game. We had two injuries early in the game that slowed us down, but we came together. We weren’t ready for this to be our last game,” Jacklich said. “They’re (Olivo and Price) both key players. Me, Dawaiian and (running back D’angelo Bellamy), we knew we had to step up. We knew we had to protect the ball and run hard. We took care of business."

The Raiders outscored the Tigers 19-6 over the final two quarters, leaning on a depleted secondary that stiffened in the red zone in the fourth quarter. Safety Justin Traina intercepted a pass in the end zone and the Raiders broke up a potential game-winning two-point conversion with about 90 seconds remaining.

On the final two-point try, Canepa concedes he may have outfoxed himself. With a 31-24 lead early in the fourth quarter, Canepa got caught chasing the points.

“They won the game,” Canepa said, pointing toward his players. “I think I slowed them down. I didn’t do a good job coaching, but I will be better next week. I guarantee it.”

For two quarters, Central Catholic looked like a team that hadn’t played a football game in two weeks.

Dalton Durossette was intercepted at the 5-yard line, spoiling a promising opening drive, and the defense was confounded by the Tigers’ tricky Wing-T. Aaron Espero's 96-yard touchdown was bookended by Raymond Brown's scoring runs. After Durossette scored on a 1-yard run to make it 21-12 with 28.1 seconds left in the half, Inderkum responded with a 33-yard field goal by Brandon Berger as time expired.

In the locker room, McNeely said the Raiders vaporized doubt with a bold declaration.

“Honest to God, I’m close to tears,” McNeely said. "We was down for a second, but you had to speak it into existence. It was going to happen. … Now we’re here. We’re going to the sections. I can’t ask for anything else.”