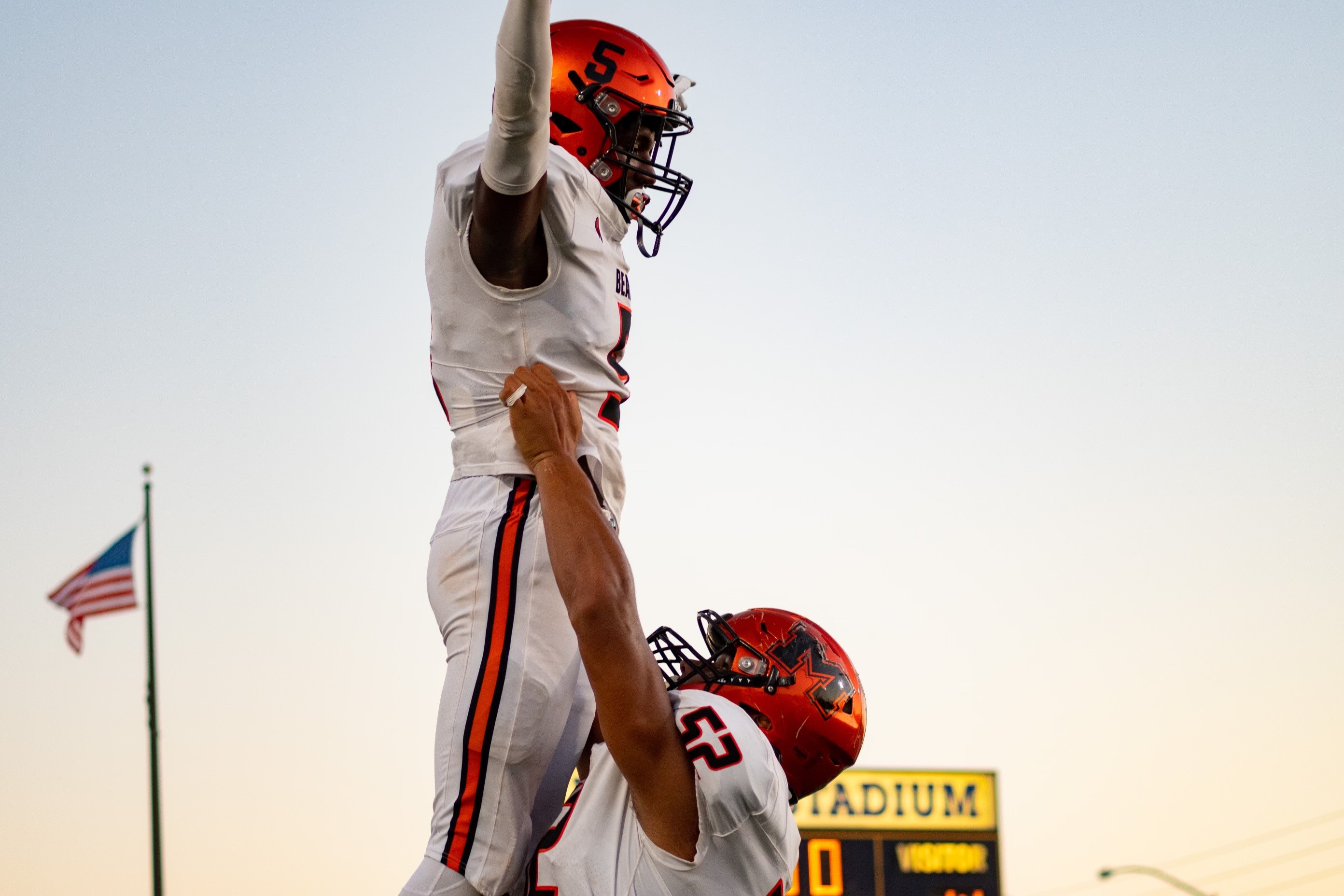 Merced running back Chase Smith is hoisted into the air after a rushing touchdown in a 33-14 victory at Gregori on Friday, Aug. 26, 2022. (Diego Hernandez)

MODESTO -- Going into Week 1 of the season without a win can leave a large chip on a team’s shoulder.

With tremendous skill players on both sides of the ball, the Merced and Gregori football teams were able to create exciting defensive plays and incredible touchdowns. However, the Bears (1-1) capitalized on early special-teams touchdowns to hand the host Jaguars (0-2) their second loss of the season at the newly-renovated Don Lanphear Stadium, 33-14.

Merced came charging out of the gates with an onside-kick, which it recovered, allowing them to put pressure on the Jaguar defense early in the game.

“We felt like we had a good scheme going into this with our punt-return game,” Bears coach Rob Scheidt said.

After a short punt by Merced pins Gregori deep in its own end, Bears junior Chase Smith returns a punt for a touchdown to take the lead with less than 2 minutes off the game clock. After another Jaguar punt, senior athlete Enoch Evans, the FrontRowPreps.com Player of the Game, put the Bears ahead 14-0 with less than 6 minutes left in the first quarter with another punt return.

“When we get into the end zone faster, it gives our defense more momentum and more energy to help us win,” Evans said.

Smith stretched the lead to 20-0 in the first quarter with a 40-yard run.

“Big shout-outs to the O-line, they did their jobs, they did their assignments this week,” collectively coming from Smith on how the offensive line helped the teams’ play.

Evans capped the first half with a highlight-reel touchdown. Smith took a pitch from quarterback Carter Haugen, and with Gregori biting on the run, Smith launched a deep ball for Evans, who ran underneath and away from the Gregori defense. The trick play covered at least 50 yards, sucking the life out of any Gregori rally.

“I’m everywhere, I could do everything … be all over the ball on offense and defense, and feeding energy to my team,” Evans said.

The Jaguars were able to turn an outbreaking route into a long touchdown, with senior Ayden Powers putting the first points on the board for Gregori to end the first half down, 26-7.

The Bears put the game away with another big play from Evans, who completed a pass from Haugen to make it 33-7.

“It’s a heck of a privilege to have these guys, they get the job done being the athletes they are,” senior lineman Jalonn Booth said.

The road gets tougher for Merced, who draw Downey and its high-flying offense next week. Gregori looks to snap its two-game losing streak against Atwater.