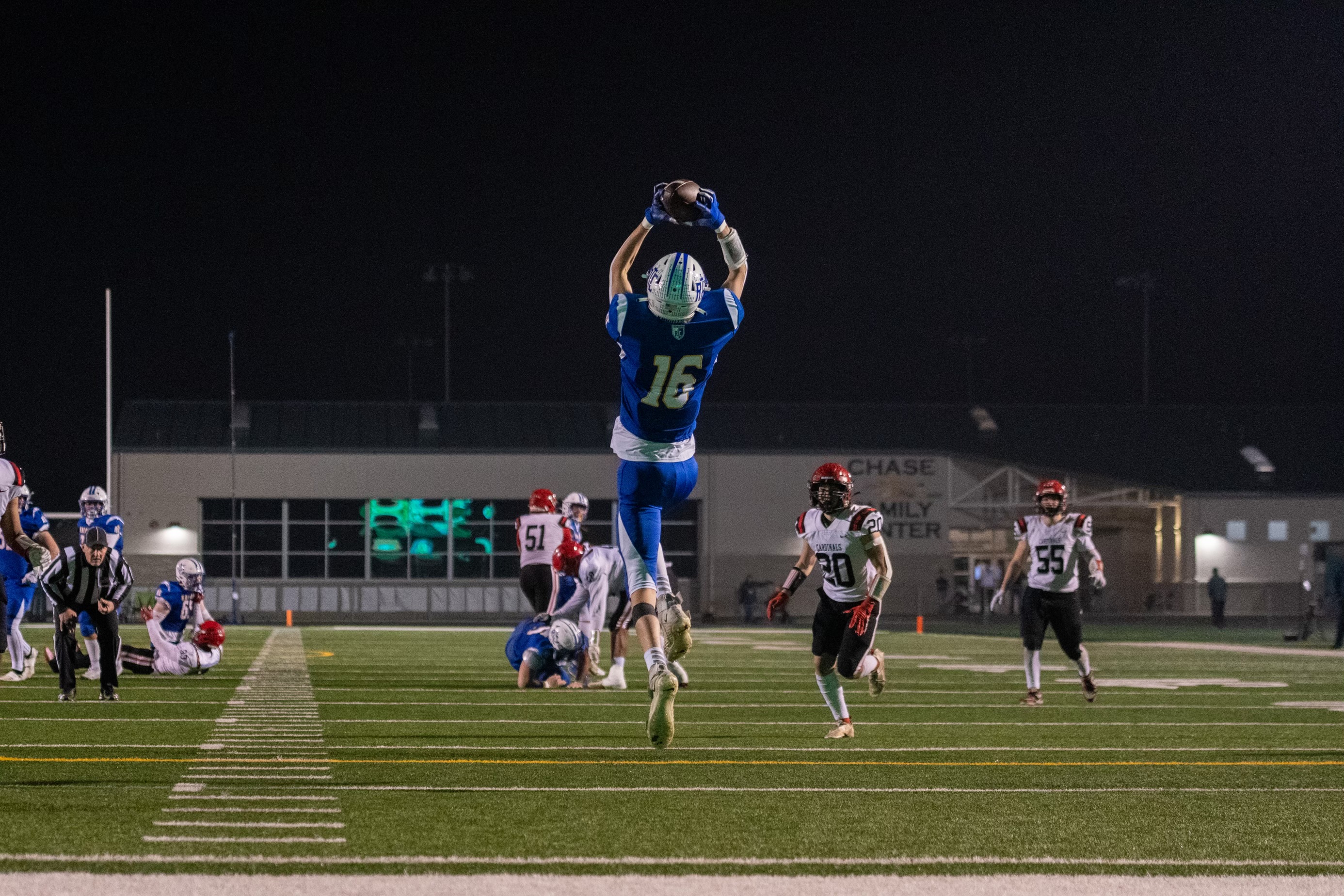 The Escalon High Cougars practiced in the rain Thursday, then reviewed film and heard an important season review from their coach.

Andrew Beam reminded his team, which is one win away from a state championship game, of the complex road the Cougars have traveled.

“We talked last August about being here,” according to Beam’s chat with the Cougars. “We never would have imagined the path we took.”

The lesson, of course, is that Escalon (11-3), did get here – the CIF Northern California 4-AA final against Pleasant Grove of Chico (9-4), to be contested Friday night at Engel Field.

The winner will face either Northwood of Irvine or Kennedy of Delano, the Southern California finalists, next week for the state title.

Senior leadership cannot be underestimated if you’re still playing football in December. Such is the case for the Cougars and their captains Logan Anderson, Ryker Peters and Owen Nash.

All three were instrumental in Escalon’s dramatic 35-34 victory last week over Sonora, good for a Sac-Joaquin Section Division V title and the third straight blue banner.

Sonora, only a couple of first downs away from a win, was victimized by a topsy-turvy final four minutes. They were keynoted by Anderson’s leaping interception and 35-yard return for a touchdown. And with 28 seconds left, Nash pulled down a jump-ball pass from Donovan Rozevink for the winning touchdown. Peters, who could surpass the 2,000-yard mark for the season Friday night, contributed 160 rushing yards and a TD.

Both Escalon and Pleasant Valley, neither which won their respective league titles, have shown major improvement over the past six weeks. Escalon dodged back-to-back losses to Hughson and Hilmar and is playing its best football.

Pleasant Valley, coached by Mark Cooley, lost to Enterprise of Redding 31-0 and Foothill 35-7. Those scores are important because the Vikings avenged both losses the last two weeks — 38-20 over Enterprise and, in the Northern Section final last week, 10-7 over Foothill.

“They’re a very big team. They definitely pass the eye test,” Beam said. “We’ll be at home at Engel Field and we’re happy about that.”

Three years ago in the NorCal regional, Escalon traveled to Chico and defeated Pleasant Valley 41-17. Beam cautioned, however, that Escalon did not pull away that night until the fourth quarter. The Cougars smoked La Jolla the following week for the state title.

Manteca (11-1) at Pittsburgh (11-2) – The Buffaloes return to a CIF State Northern California Regional Bowl for the sixth time in program history and they'll once again be pitted against one of the Bay Area's best.

Pittsburg attacks with 6-foot-5 Jaden Rashada, a four-star recruit who has verbally committed to Florida. Rashada has been fast-tracked for stardom since bursting on the scene as a talented freshman at Liberty High in Brentwood. He played a stint at IMG Academy in Florida before returning to the Bay Area and enrolling at Pittsburg. In his senior season, Rashada has thrown for nearly 3,000 yards and 28 touchdowns, and he led the Pirates to within a punch of knocking out mighty De La Salle in the North Coast Section Open final.

Instead, the loss dropped Pittsburg into Saturday's Division 1-A regional bowl against Manteca, the Sac-Joaquin Section Division II champion. The Buffaloes are a bit mystified by the bowl matchup, and they've got a reason to gripe.

After notching the program's ninth section championship, Manteca hoped for a home game and one last chance to showcase a four-star prospect of their own. Florida State-bound Blake Nichelson, a versatile offensive talent who projects as a linebacker in college, has scored 42 touchdowns and accounted for 2,369 all-purpose yards, including 292 total yards and five touchdowns in the section final shootout.  His touchdown total is second in the state and tops in Northern California.

Ripon Christian (11-2) at Hughson (11-2) – The Knights ride a seven-game winning streak, including last week’s 28-16 victory over Woodland Christian for their first section title (Division VII). They’re a consensus underdog, however, against Hughson in the Northern California Division V-AA game. The Huskies twice defeated Orestimba while RC was beaten by the Warriors in the game that decided the Southern League title.

Ripon Christian will rely more than ever on senior quarterback Trey Fasani, who will be minus key receivers Thys Vander Hoek and Griffin De Abreu. Both were injured last week.

Hughson shocked Escalon 29-14, one of the season’s most shocking scores, but lost to eventual Trans-Valley League champion Hilmar. The Huskies, looking forward to clearly the program’s biggest game since the glory days of the 1990s, are led by running backs Liam Bridgford and Alex Villareal, sophomore quarterback Robert McDaniel and linebacker David Burns.