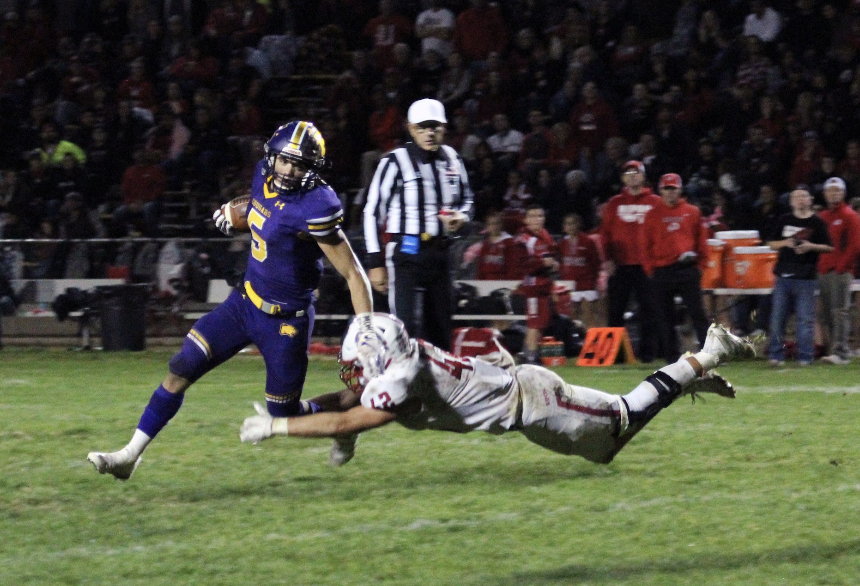 Escalon's Logan Anderson runs through the tackle attempt by Ripon's Ethan Day during a 21-7 victory on Oct. 22. (Samantha Schmidt)

'Starting to feel like home': Ripon returns to Engel Field for 3rd time in 12 months

Like some sort of glitch, when the video game continues to send the hero into the dragon's lair for an end-of-the-level battle, the Ripon football team will board a bus on Friday bound for Escalon.

For the third time in less than 12 months.

This time around, the Indians (8-4) and the top-seeded Cougars (10-1), rivals for as long as your grandparents can remember, vie for a berth in the Sac-Joaquin Section Division V championship. Kickoff is 7 p.m. on Friday.

On the other side of the bracket, Hilmar (10-2), another Trans-Valley League heavyweight, travels to Casa Roble (7-4) with the same stakes. Fittingly, and to no one’s surprise, Escalon, Ripon and Hilmar finished 1-2-3 in the TVL.

“Being in the TVL and having to run the gauntlet, we were so loaded with five really good teams (including Hughson and Livingston), there’s so much parity in our league,” Ripon coach Chris Musseman said. “Escalon did a great job of getting through it unscathed. The rest of us took some bumps and bruises but we’re still fighting. It’s impressive with how well our league is doing in the postseason.”

Hours before kickoff, Escalon already owns an advantage. The game will be played at Engel Field, notorious for its tall grass and sometimes muddy conditions. Last week, Engel Field unveiled a new hazard – a dense fog that neutralized Woodland’s passing game and turned the Cougars’ junior fullback, Ryker Peters, into a star.

Peters rushed for a career-high 205 yards and three touchdowns, recorded 12 tackles from the middle of the defense, and blocked and recovered a punt in the end zone on special teams as Escalon ran away from the Wolves.

Escalon has won seven consecutive games, including a 21-7 victory over Ripon, mistake-prone and gashed early by the Cougars’ Wing-T during their Oct. 22 contest.

“For us, the unfortunate part of this is that within a calendar year, this is our third trip to Escalon,” said Musseman, whose team has lost two of the last three in the series. “It’s not the most comfortable place to play, especially being from Ripon. On top of it being a great TVL matchup, (Engel Field) is a tough place to play (but) our kids are getting used to it. The kids are starting to feel like it’s home.”

While not entirely true, Musseman also knows his team travels well, especially when it comes to those eight miles that separate former CIF State champions. The Indians will pack generations of faithful into those creaky visitor’s stands at Engel Field.

“It’s going to be a true playoff environment, big game environment,” Musseman said. “I’m trying to insulate myself from all of that stuff and get the kids ready to play. I imagine there won’t be a lot of room in that stadium.”

Ripon has evolved since its first meeting. Transfer Adam Barrera has settled in at quarterback. Barrera is one of the Indians’ best athletes, a dual-threat type.  He’s surrounded by a cast of emerging stars: Ethan Day and Nolan Young, season-long stalwarts on defense; hard-charging running backs Caleb Johnston and Jack Manning; prospect Bronson Burrow, a tight end with growing interest on the recruiting trail; and sophomore Owen Wilbur, another one of Ripon’s two-way warriors.

Musseman hopes Barrera’s arm, coupled with the Indians’ tall targets down field, will force Escalon to honor the pass and not fill the box with defenders.

“We’re different on offense. We struggled in the passing game and that part is getting better for us,” Musseman said. “We hope they have to something about it rather than put 10 guys in the box and play the run only.”

Escalon’s keys to success are simple in this battle of evenly-matched sides, Beam said. The Cougars will need to avoid the drive-killers: turnovers and penalties. Beam says his young team can’t continue to roll the dice.

“That first time we played we didn’t play well on offense. We still found a way to win, which says a lot about our character,” he said. “There is a ton for this young group that we need to clean up on both sides of the ball or we’ll get beat.”