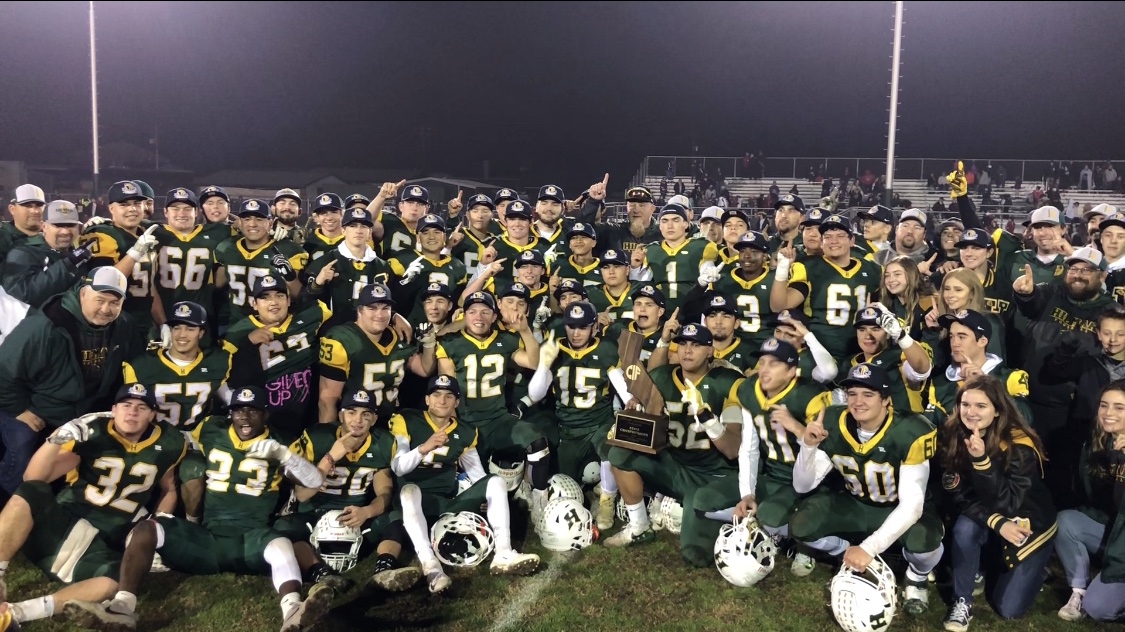 HIMAR -- Justin Rentfro balanced the CIF state championship trophy on his right shoulder pad as he grinned from ear to ear, Saturday night.

The Hilmar High Yellowjackets are best personified by the ranch-hardened Rentfro, a 210-pound hammer who sobbed as his team celebrated a 49-0 bludgeoning of 2017 champion Strathmore.

“We had a perfect game,” Rentfro exclaimed while he was surrounded by family and friends. “No one was going to stop us.”

Aside from several penalties, the Yellowjackets — peaking at the exact right time — weren’t far from perfection.

When it was over, Rentfro wasn’t alone in the tear-shedding department. The Yellowjackets, anchored by 17 returning starters, pulled together after mid-season losses to Ripon and Modesto Christian. They also remembered how they lost to Strathmore in the regionals a year ago, a 53-52 double overtime heartbreaker on the same turf.

All the above clearly hardened Hilmar, which took full advantage of the rematch as about 4,000 crammed into McSweeney Field.

“It was incredible how good we became,” Hilmar coach Frank Marques said. “Part of my heart is broken because I can’t coach these kids anymore.”

He’ll especially miss Rentfro, who surely will go down as one of Hilmar’s best-ever players. His pure physicality shaped the title game, and he did it without scoring a single point.

Rentfro literally dragged the Strathmore defense downfield for 132 yards on 11 carries. On defense, he joined with Nick Aguilera, Jacob Diaz, Brennan Mason (back-to-back sacks during the second half) and others to shut down Strathmore.

One of Rentfro’s loudest hits ended the night of Spartan star Alonso Acevedo early in the second quarter. Rentfro bent his facemask, such was the blow he laid on Acevedo, who suffered a concussion and walked slowly off the field.

Acevedo, who rushed for 1,779 yards and 32 touchdowns entering the game, finished the night with three yards on five attempts.

“Rentfro was on a mission tonight,” Marques said.

Hilmar already led 14-0 before the Rentfro collision, but the hit no doubt sapped Strathmore’s spirit. The visitors missed a 36-yard field goal on the next play, and that was the Spartans’ best chance to score.

Hilmar wasted no time. It marched 70 yards in eight plays on the game’s first series, capped by a 6-yard run by Sharp (15 carries, 86 yards). Later in the first quarter, the Yellowjackets parlayed good field position into a quick 35-yard scoring drive. This time, Sharp found a crease on the left side and sprinted 12 yards into the end zone.

Hilmar led 14-0 before Strathmore collected a first down.

Crowley, the junior quarterback who threw 18 touchdown passes without an interception this season, then made his impact. Undaunted after penalties erased two Hilmar scores, Crowley found Bryan Millan in the seam for 20 yards and the touchdown.

On the next play after Strathmore was stopped on downs late in the half, Crowley applied the dagger with his 58-yard strike to Millan. The senior receiver-corner-kicker (7 for 7 on conversions) adjusted his route, caught the pass on the 20 and raced home.

Millan, who suffered an ankle injury and missed most of last week’s win over East Nicolaus, worked overtime to be available.

Hilmar opened the second half with a stop on defense and a 60-yard march to make it 35-0. Three plays after Rentfro punished the Strathmore defense for 34 yards, Sharp took a direct snap and stepped to his left 14 yards for the TD.

Aiden Azevedo leaped high to grab Crowley’s 13-yard pass for another score, and the clock was wound late in the game before David Amaral’s 8-yard run for Hilmar’s closing points.

Consider Hilmar’s playoff momentum: Ripon Christian, East Nicolaus and Strathmore combined for only one loss before they ran into the Yellowjackets. The trio was throttled by a combined 154-28.

“They would be closer to a Division 4 team in our section,” Blackwell said.

It was appropriate that the last Yellowjacket to leave the field was Rentfro, still holding the championship trophy with parents George and Lacey close by as the lights went out.

Ron Agostini was recognized for regional and national awards during his 40-year career with The Modesto Bee before his retirement in 2017.