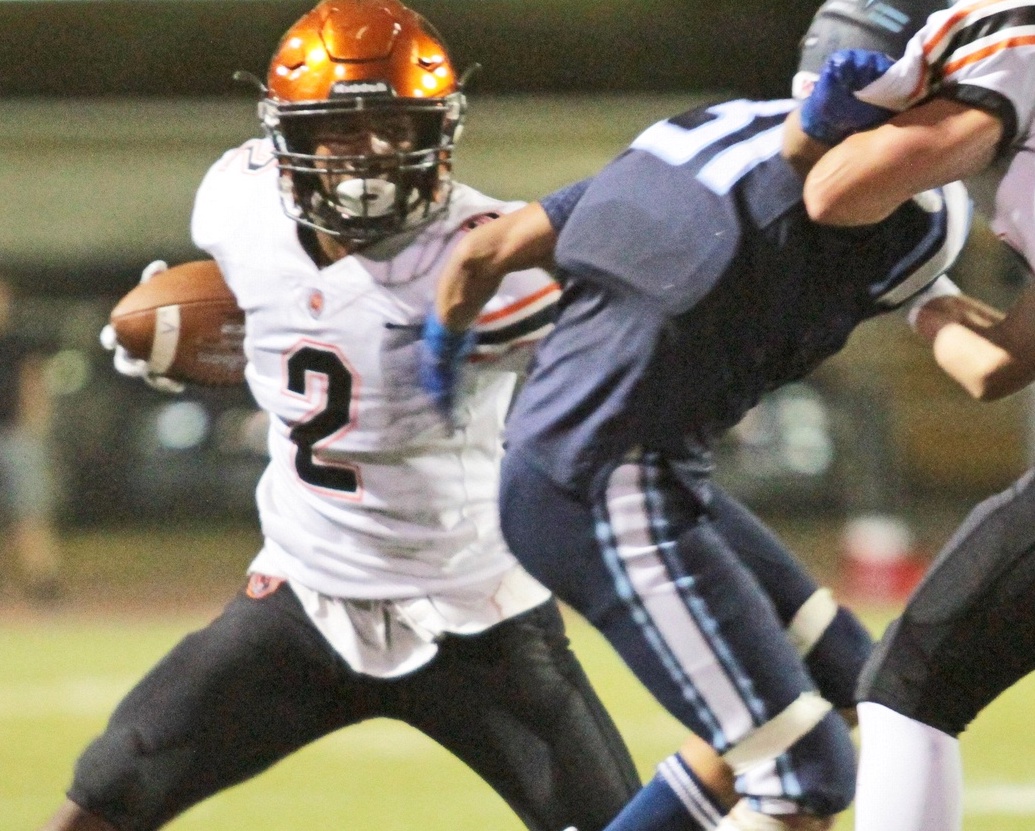 Merced wide receiver Xavier Stewart ranks among the top pass-catchers in the Sac-Joaquin Section with 751 yards and a 20.3 yards-per-catch average. (Daniel Harris Photography)

Statistically, the section's best play in the Front Row Preps region. Who are they?

The FrontRowPreps.com region is home to the top offensive producers in the Sac-Joaquin Section, including quarterback Xavier Rodriguez of Davis, running back Javyn Drobnick of Big Valley Christian, and wide receiver Tyler Vargas of Orestimba. All three enter the final week of the regular season with a chance to finish atop the statistical leaderboard at their position.

Here's a closer look at the stars of the "209" area code ranked in the top-10 of five statistical categories:

Jacob Bettencourt, Orestimba: Without a dependable run game, Bettencourt has shouldered the load for the Warriors. The senior ranks third in the section in passing yards (2,336) and touchdowns (28).

Javyn Drobnick, Big Valley Christian: The record-setting Lions running back leads the section in rushing with 1,891 yards. He is averaging 210.1 yards per game and is poised to become the region’s 16th member of the 2,000-yard club on Friday against Sierra Ridge/ROP. Dronick also has 22 touchdowns.

Tony Garcia, Le Grand: Garcia is tied for seventh in the section in rushing with 1,507. He has six touchdowns.

Five of the section’s top-10 receivers reside in the FrontRowPreps.com region, including:

Tyler Vargas, Orestimba: The Warriors’ mighty mite leads the section in receiving yards with 1,100 and yards per game at 122.2, and his 16 touchdowns trail only Davis’ Gregory Smith.

Gregory Smith, Davis: Smith has been a breakout star in the Spartans’ new spread offense. Smith has 1,068 yards and 17 touchdowns, tops in the section.

Michael Sherrod Jr., Davis: Another sure-handed junior in the Spartans’ offensive huddle, Sherrod has a team-high 55 receptions for 825 yards and 10 touchdowns. He is fifth in the section in receiving yards.

Anderson Grover, Downey: Grover is sixth in the section in receiving yards with 824 yards on 55 catches. He also has nine touchdown receptions, despite a midseason change at the quarterback position.

Xavier Stewart, Merced: Stewart has contributed in a number of different ways to the Bears’ magical season, but one of the top wide receivers in the region hasn’t disappointed down field. He is ninth in the section with 751 yards, and his 20.3 yards-per-catch average is second-best among those in the top-10.

Michael Kamps, Ripon Christian: Kamps is second in the section in touchdowns with 26, including 19 on the ground. Kamps scored two rushing touchdowns in last week’s victory over Le Grand, a title-clinching performance. He is joined in the top-10 by Drobnick (22) and Hilmar running back Isaac Sharp (20).

Declan Van Vuren, Ripon Christian: Van Vuren ranks fourth in the section in sacks with 10.5 in eight games. He had a season-high 2.5 sacks in victories over Orestimba and Gustine, two Southern League title contenders.

Jacob Walden, Escalon: A one-time American Chevrolet Athlete of the Week, Walden leads the Trans-Valley League in sacks with 10.

Others: Joshua Sober of Argonaut has nine sacks, eighth-best in the section. … Los Banos’ Izaiah Flores’ is tied for No. 10 with eight sacks.