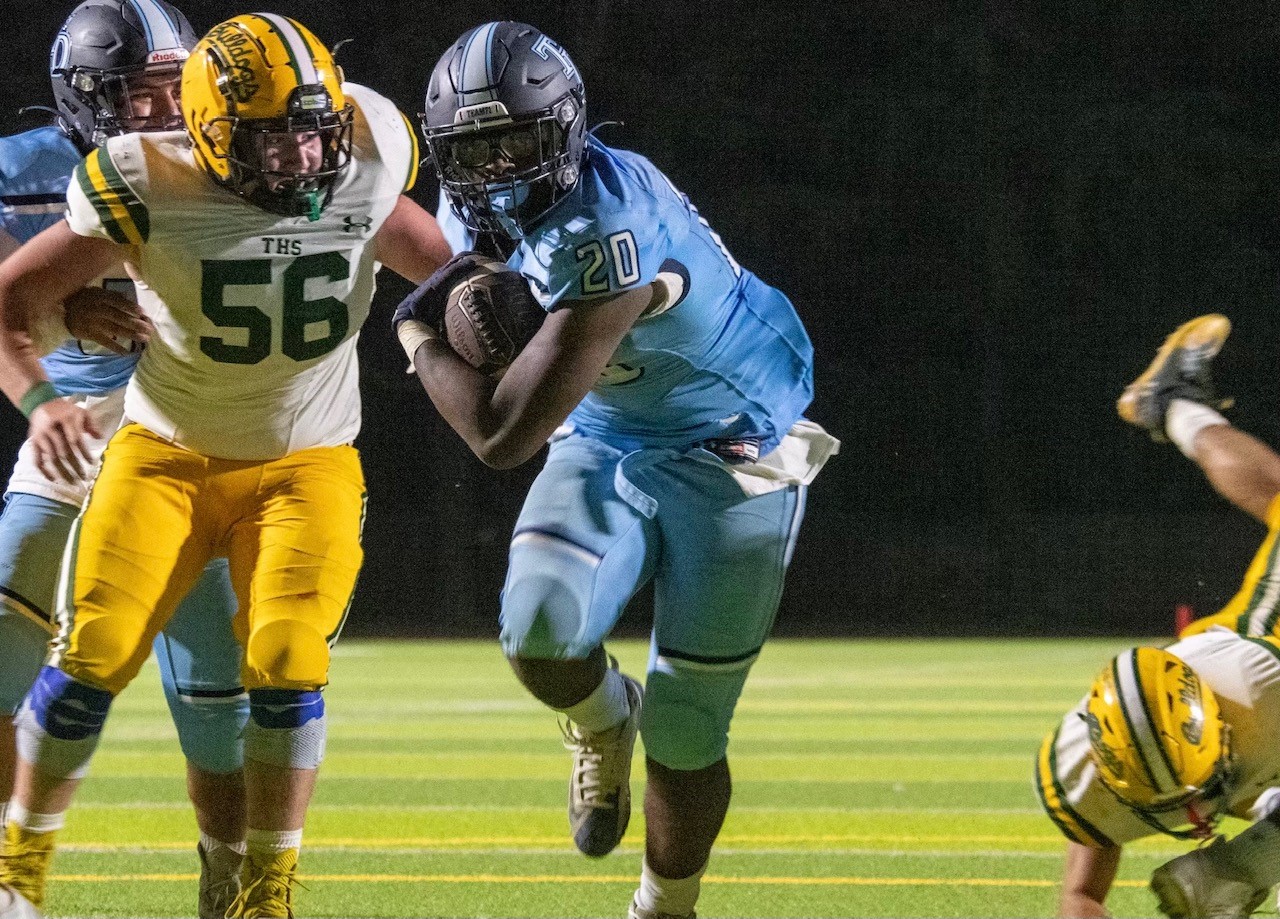 Downey High running back Kimoni Ragland (20) runs up the middle for a short-yardage touchdown during the Knights' 24-13 win over previously undefeated Tracy High on Friday, Sept. 16, 2022. (Diego Hernandez)

But his impact on Downey’s furious 24-13 come-from-behind win over Tracy was no laughing matter on Friday night. He rushed for 109 hard-earned yards on 25 carries (11 in the final 12 minutes), and his two late touchdowns verified the Knights’ physicality – not usually a Downey strength – to knock off a previously unbeaten opponent at Chuck Hughes Stadium.

“I loved it,” Ragland said in reference to his heavy load. “I know what I’m capable of. I showed it.”

Ragland finished off Tracy with his straight-ahead rips of 4 and 6 yards, romping into the end zone standing up both times. That said, Ragland actually carried the Knights’ sword while the aggressive defense swung it.

Downey (5-0), which trailed 7-3 most of the night, changed the game's course on five straight Tracy possessions in the second half. They ended thus: Interception in the end zone by sophomore Jeremiah Stine, a 4th-and-1 tackle behind the line of scrimmage by nose tackle Deontae Huley, another 4th-and-1 denial by Matthew Flores, a recovered fumble at the Tracy 6 yard line by Cayden Edmiston and a tipped interception by Ethen Rowland.

Downey produced three unanswered touchdowns during that dizzying sequence, the last by Ragland with 4:15 left.

“The defense played phenomenal,” Downey coach Jeremy Plaa said. “That was the first time we had that many turnovers (five) in a long time.”

Tracy (4-1) and its clever option quarterback Cameron Ross (11 carries, 112 yards, TD), stood only eight yards away from a two-possession lead late in the third quarter. But Ross’ arching pass to the middle of the end zone, on 2nd-and-2, was intercepted in stride by Stine, who returned it 16 yards.

“I read the quarterback’s eyes and shot my shot,” Stine said.

Minutes later, the 280-pound Huley – a huge reason why Downey is still unbeaten – burst through the line and turfed Elijah Gutierrez for another important rejection in Downey territory. Stine’s pick and Huley’s clutch play switched the momentum for good.

“After that, we couldn’t dig out of it,” said Tracy coach Jeff Pribble, who liked his Bulldogs’ effort all night. “A couple of little mistakes turned into major things. I think everyone in this stadium knew how tight this game was.”

Downey finally took the lead to stay on Camden Rush’s only reception. He outleaped a defender at the goal line to bring home the 30-yard pass from Conner Stoddard early in the fourth quarter.

Until then, Tracy countered a 31-yard field goal by Downey’s Elijah Reyneveld with an 85-yard catch-and-run fade from Ross to Kurtis Maynor for the second-quarter touchdown. That’s why Downey sweated most of the evening.

Tracy’s stout defensive front contained Ragland most of the game while dropping back seven or even eight in the secondary. The coverage resulted in Stoddard being sacked four times during the first half.

“Conner did not have anywhere to go with that ball,” Plaa said. “In that situation, you have to run. We decided to put extra blockers in the box (one was linebacker-fullback Richard Williams). We figured it out.”

And Ragland went to work. All his yards came inside the tackles, and they multiplied as the Knights’ confidence grew.

“He was running possessed,” Plaa said. “He wanted to score touchdowns.”

Ross' 21-yard scramble for a touchdown closed the deficit in the final seconds.

A week ago, Ragland had four wisdom teeth removed and did not play during Downey’s 43-0 blitz over Beyer. Infections complicated matters, and his practice time this week was limited.

“He was in some pain. I don’t think I saw him smile all week until today,” Plaa said.

Ragland had a good reason to enjoy Friday night.