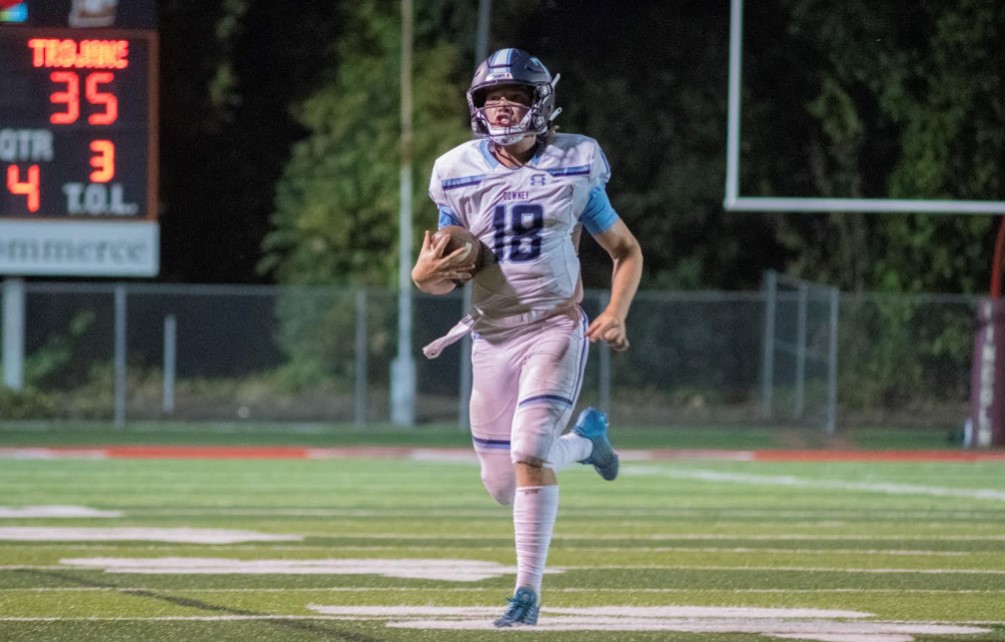 Downey senior quarterback Conner Stoddard scrambles for a first down late in a 42-35 victory at Lincoln High of Stockton on Friday, Aug. 19, 2022. (Diego Hernandez)

STOCKTON – With two of the best quarterbacks in the Sac-Joaquin Section on one field, the Downey and Lincoln football teams delivered an electrifying game on opening night.

The reigning CCAL champion Knights (1-0) relied on their potent run game alongside the “Air-Raid” offense to erase an early 10-point deficit and hand the Trojans (0-1) a loss at Alex G. Spanos Stadium, 42-35.

Lincoln’s Tyrone De Loney lit up the scoreboard early, returning the opening kickoff for a touchdown just 11 seconds into the game.

“We just have to pinpoint and adjust our blocks to fill lanes,” Downey special teams coach Ruben Platt said of the return blunder.

Undeterred, the Knights struck back minutes later with a 32-yard touchdown by sophomore Ethan Woodmansee. After a series of incredible runs from Lincoln’s Kenyon Nelson and Jordin Thomas, the Trojans charged into the second quarter with a 20-10 lead.

“We tried to stay calm and focus on what we as a team needed to do,” said Knights quarterback Conner Stoddard, who stayed locked-in from the jump. Chunk plays from seniors Kimoni Ragland and Gabe Hernandez, and a Stoddard rushing touchdown would keep Downey hot on the Trojans’ heels at 20-17.

The two teams would trade blows and the half ended with Lincoln holding a slight advantage, 27-24. Lincoln felt good about its position, largely because of the play of its offensive line in the opening two quarters.

“Everything goes hand-in-hand,” Lincoln offensive line coach Joseph Townsell said. “As long as all 11 guys on the field do their job, we’re going to keep getting those big plays that we need.”

In the second half, the game became a defensive battle. The tides would begin to shift, however, with a 17-yard screen pass touchdown to Ragland. A field goal would stretch the Knights’ first lead to 34-27.

“Not only were we able to pass it, but the O-line was working their butts off for blocks down field,” Stoddard said.

With less than 10 minutes in the game, Kenyon Nelson and company jumped back into the lead with a fake field goal. The two-point conversion made it 35-34.

For nearly four minutes on the game clock, the Knights would continue to fight. With 5:35 left in the fourth quarter, Ragland would burst into the end zone with a 9-yard touchdown. Wanting to extend the lead to seven points, 42-35, Downey coach Jeremy Plaa signaled for a two-point conversion. Stoddard converted, connecting with Hernandez.

Defense and special teams would solidify the impressive road win for Downey. Senior safety Cayden Edmiston picked off Nelson, and with the Knights trying to run out the clock, Woodmansee fell on top of a fumbled punt attempt to secure the win. Stoddard dropped back to punt, but lost hold of the football.

“It was pure excitement. I’m anxious to do anything to get to the ball,” Woodmansee said. “You don’t expect something like a muffed punt to happen, but we practice it for that small chance where it can happen.”

The Knights look ahead to next Friday, when they face the East Union Lancers in Manteca. Meanwhile, the Trojans are back home against Kimball of Tracy.