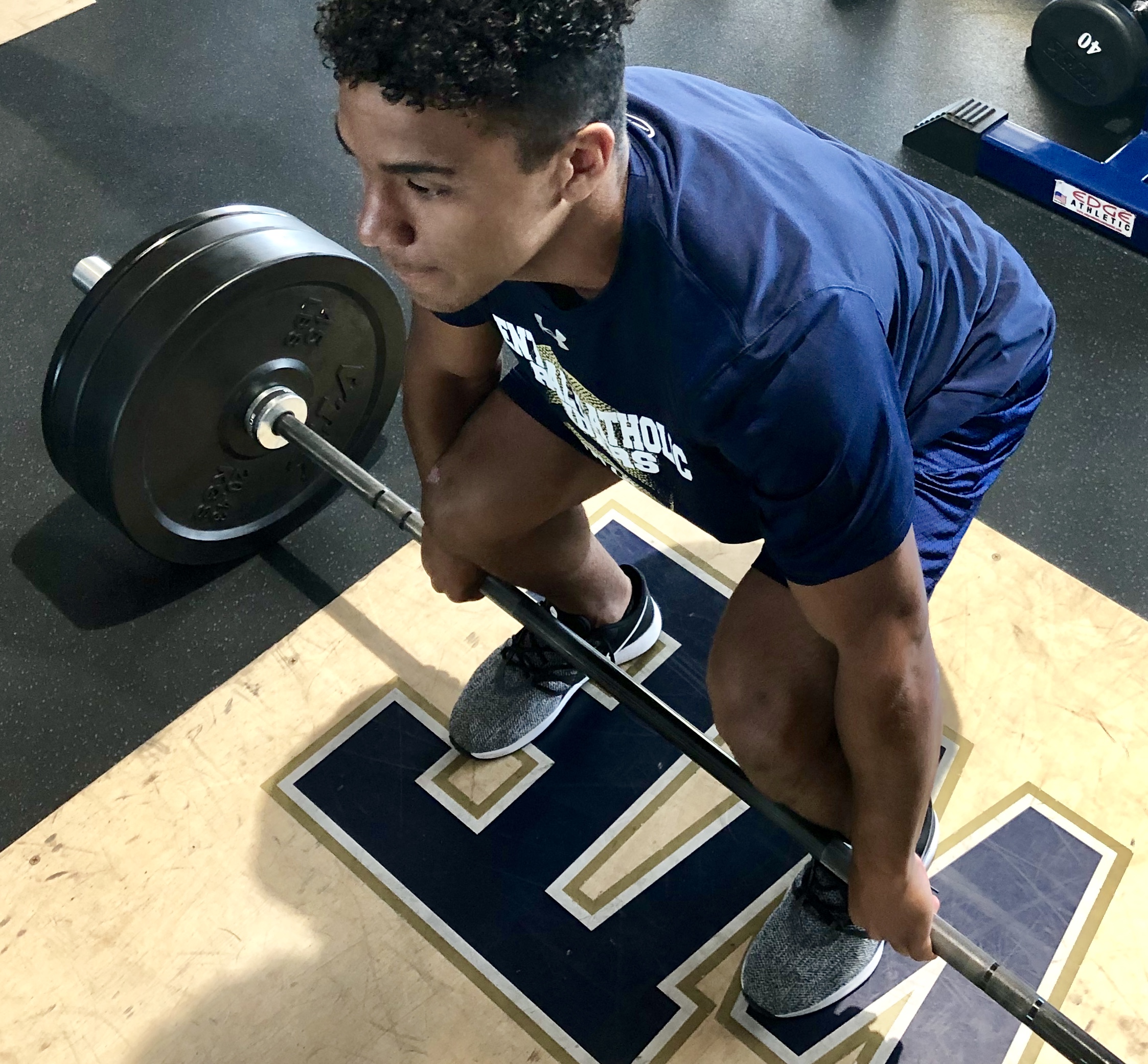 Central Catholic senior running back Minaya Olivo has ascended to No. 1 on the depth chart. He hopes to return Central Catholic to the Sac-Joaquin Section Division II final, a game he missed last fall because of injury.

Minaya Olivo stands over a bar loaded down with weights, bouncing to a beat that plays overhead.

The Central Catholic running back is surrounded by another talented cast, road-graders and specialists alike, many of whom championed the Raiders’ ill-fated journey to the Sac-Joaquin Section Division II final last fall at Sacramento State University.

There is quarterback Kyle Jackson strengthening his arm on a band. At the far corner of the room Jackson’s in-camp rival, 2018 starter Dalton Durossette, trades sets with heralded kicker David Gallegos in a squat rack.

In between, Sithri Price, a small-but-explosive wide receiver and defensive back, hangs upside down from a pull-up bar.

“I’ll be honest, I come to practice and I’m happy every day,” coach Roger Canepa said. “That’s how you win. … It’s not about all these Division-I athletes. It’s about how we all get along and put our egos aside for the big picture — the team. I think we’ve done a great job here.”

And then there is Olivo, a natural playmaker with elite genes. His father, Miguel Olivo, played professional baseball for 13 seasons, and many believe the younger Olivo, who has generated interest from UCLA, Oregon State and Arizona State, can blaze his own trail on the gridiron.

Olivo scored seven TDs during three-game tear late in the season, including a season-high 102 yards and three scores in an emotional 54-14 win at The Corral. However, Olivo injured his leg on a 21-yard run in a come-from-behind victory over Inderkum in the section semifinal and never factored into a controversial loss to Del Oro in the final.

The loss haunts the Raiders, a four-time CIF State champion.

“I may never move past that. I thought our kids deserved that section title and probably even better than that; we could have done some damage,” Canepa said “But that’s life. Good things happen and bad things happen — you just got to deal with it. It was tough, but we’ve moved on. We’ve had a good summer. We’re working hard, as hard as anybody.”

That Olivo has developed into a leader has been the one of the Raiders’ biggest offseason revelations. For all of his next-level ability, Olivo admits he lacked the confidence to be considered an alpha. The smallest of failures and disappointments, such as a dropped ball or missed tackle, filled him with doubt and apprehension.

That all changed at a collegiate showcase hosted by Texas at Cal Lutheran. There Olivo competed in front of coaches from Power 5 conferences, many of whom raved about his mental approach and elusiveness. As the buzz around him grew, so too did his confidence.

“I think he realizes,” Canepa said. “We keep telling him the team” is going to be as tough as you are. “If our tailbacks aren’t tough, we don’t win. We’ve been blessed with some tough tailbacks.

“We might count on one guy (Olivo) a little more, like in years past. So you have to be tough if you’re packing that rock 20 to 30 times. We want to win the league championship and get back to the section title game. It’s been four years, we want to get back to the state game. Those are our goals. That’s why we play the preseason.”

Central Catholic had the region’s toughest schedule in 2018, highlighted by a memorable showdown with national power De La Salle and Holy Bowl rival St. Mary’s. This fall, Canepa has added a trip to Los Angeles to face Upland, home to the No. 1-ranked linebacker in the nation, senior Justin Flowe, a 6-foot-3, 225-pound stopper. Upland was No. 16 in the state, according to MaxPreps’ season-ending rankings.

“We should be ready for everything,” Canepa said.

One year after missing the section final loss, Olivo, hunched over a bar, hopes to play a starring role.

“We got a taste of it, but we didn’t get the taste we wanted,” he said. “In the weight room, that’s all we think about. If we’re lacking in our reps, if I think about (the schedule), it fuels me.”