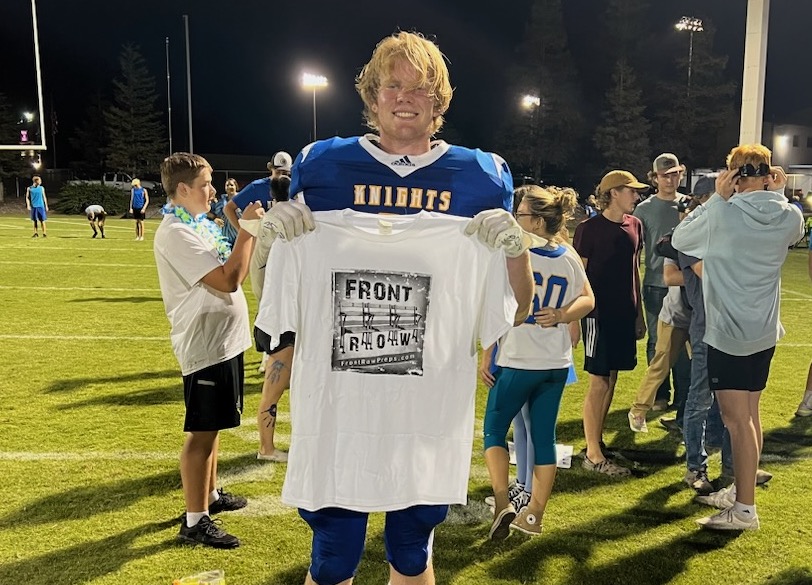 Van Der Hoek powered the Knights to a 38-6 win over Le Grand on Friday night with four catches for 60 yards and a touchdown.

Towering over whoever tried to guard him, the senior was unfazed. Van Der Hoek, however, saw tonight as a chance to prove himself – a promise he made good on.

“It felt really great to prove what I know I can do, and it just feels good to do it (in front) of this big crowd of supporting people.”

Van Der Hoek established himself as the primary target for his senior quarterback, Trey Fasani.

“I’m just going to practice even harder knowing that I’m going to be (the primary target)”, said Van Der Hoek. “And I’m going to show them they better be scared when it’s third down and long.”

Terpsma, a senior, notched a sack, multiple tackles for losses, and a fumble recovery – spearheading a Knights defense that only allowed 6 points.

“It was new for me this game… I haven’t played much of (defensive end),” said Terpsma. “But I’m thinking I’m quicker than the guy in front of me. If I can get around him, I have a straight shot at the quarterback, and try to make something happen”.

The Knights, riding back-to-back blowout wins, look to keep the ball rolling against Mariposa County. Le Grand falls to 5-2 on the year and look to right the ship next Friday against Gustine.