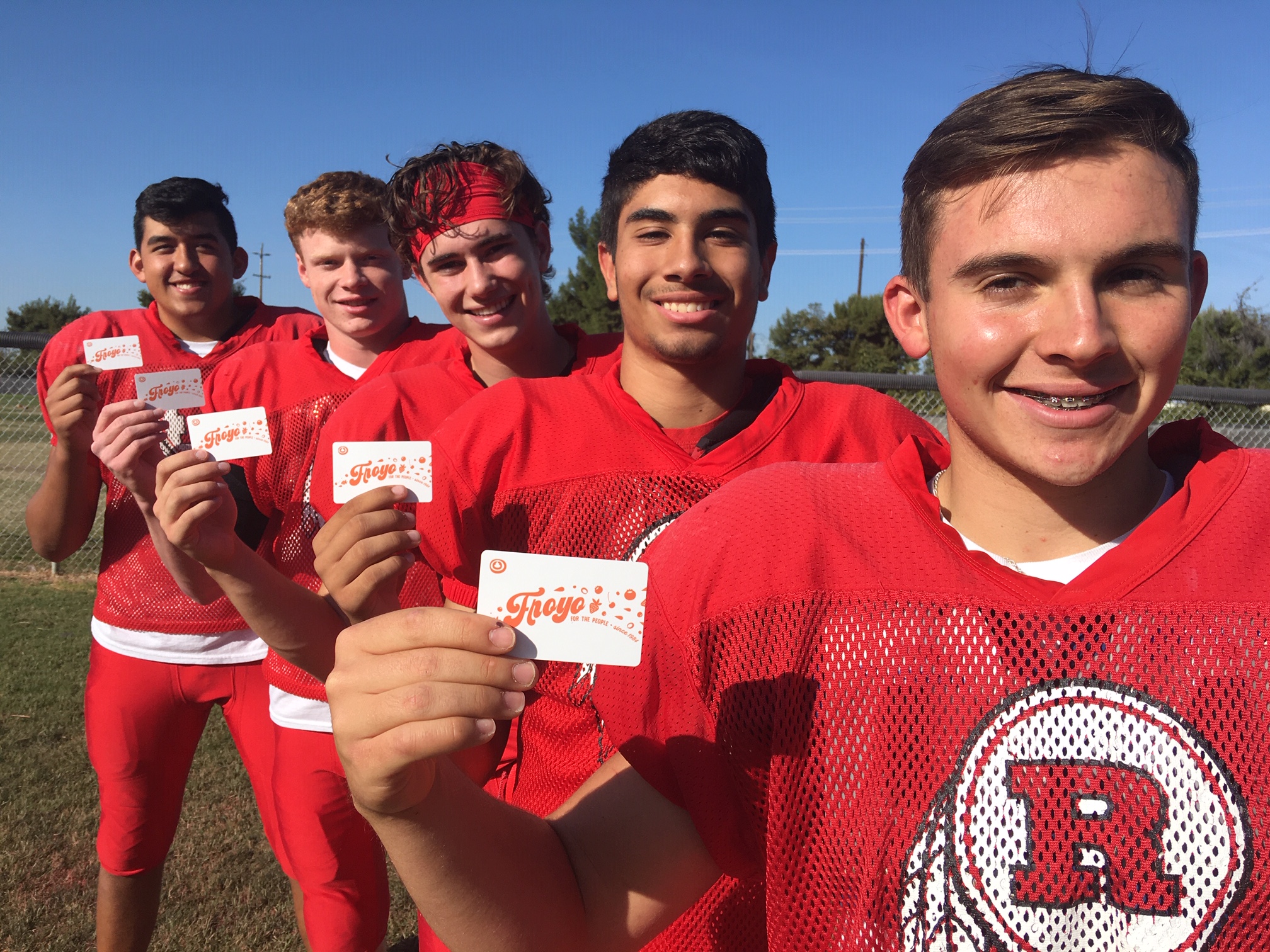 Ripon is the Yogurt Mill Team of the Week after knocking off then-No. 1 Escalon 42-21 on Oct. 18, 2019. Pictured are, from left: Caleb Delgado, Grant Wiebe, Nico Ilardi, Danny Hernandez and Jeremiah Willey.

After routing Escalon, small-school No. 1 Ripon no longer flies under the radar

RIPON – The Ripon High Indians have been empowered most of the season by their under-the-radar status.

But they’re no longer under the radar.

Everything changed for Ripon (7-1, 3-1) after last week’s 42-21 victory over previously unbeaten Escalon, the area’s top-ranked small-schools team entering the game. The margin carried as much shock value as the result. Thus the correction: Ripon leapfrogged to No. 1 and threw the Trans-Valley League into a three-way tie with Hilmar and Escalon with two games left.

“A lot of our motivation came from everybody who thought we were going to lose by 40 to Escalon,” Ripon coach Chris Musseman said Wednesday. “But everyone in our room thought, ‘We match up pretty well with their kids.’”

The Indians’ head-turning win made them an easy choice as the FrontRowPreps.com’s Yogurt Mill Team of the Week.

Here is an observation assisted by hindsight: Ripon was under-valued after its 38-27 loss at Hilmar on Sept. 20. Quarterback Nico Ilardi and two-way star Grant Wiebe both exited via injury before halftime. And they weren’t alone.

“At one point, we had five two-way guys on the bench,” Musseman said.

When Escalon dropped Hilmar 34-21 the following week, the Cougars seemingly took charge of the TVL.  The consensus had them rolling through the rest of their schedule.

Then came Ripon – bolstered by the return of Ilardi and Wiebe -- which did not blink after falling behind 14-0 last week. The Indians outscored Escalon by 42-7 the rest of the night.

A touchdown with 1 second left in the first half provided a clue why Ripon again found its mojo.

The Indians, one yard shy of the goal line, called their final timeout. They elected to run a power play to running back Danny Hernandez stepping to his left behind Wiebe.  But problems arose before the snap.

“Escalon knew it was coming. They were all calling it when we walked to the line,” Ilardi remembered. “I thought, ‘I’m going to keep it.’”

On his own, Ilardi did not hand it off and raced to his right while his teammates carried out their assignments to the left. His improv became a crucial touchdown.

“Nico has a green light. He’s a huge difference-maker,” Musseman said. “Even if the play-call is not great, he can check you into the right call based on what the defense is doing. He just understands the game really well.”

Ilardi, athletic and clever,  also plays basketball and is a scratch golfer. His return to the field opens up more space for such threats as Hernandez (763 rushing yards),  Brandon Rainer, receiver Dorian Dougherty and tight end Troy Brogan. Ilardi’s 22-yard fade to Brogan put Ripon ahead to stay and triggered Ripon’s second-half dominance.

“I’ve played quarterback since sixth grade. To me it’s like a chess game, out-smarting the opponent,” Ilardi said. “They (Escalon) knew it was coming, so I did something else.”

Wiebe, called by Musseman “the best outside linebacker in the league,” belongs in the same category as Ilardi. He makes Ripon better.

Then again, Ripon has been under-appreciated in the TVL for nearly a decade.  Modesto Christian (2009), Escalon (2010) and Hilmar (2018) annexed state titles while Ripon purred along – wait for it – under the radar.

The Indians, plugging away in California’s toughest small-schools league, have earned a share of three TVL titles in the last four years. After 2014, they have not finished lower than second. They’ve claimed four championships since 2012 and, tellingly, beaten Escalon six times in the last eight meetings.

But unlike its TVL rivals, Ripon has not taken home the splashy Sac-Joaquin Section titles or state plaques. Musseman, whose Indians are 31-12 since he succeeded Chris Johnson (he moved on to Sierra in 2016), targets higher goals.

“We’re building toward it,” Musseman said. “If we stay healthy, I think we’re going to be dangerous.”

Job 1 for Ripon is a trip to Hughson on Friday night, followed by the regular-season finale against 1-8 Modesto Christian.

“We’re trying to stay humble and not get too high after a big win,” Ilardi said. “The last thing you want is a letdown against Hughson.”

Though depth issues remain – Ripon’s roster includes only 18 upperclassmen and five sophomores – no one sleeps any longer on the Indians.