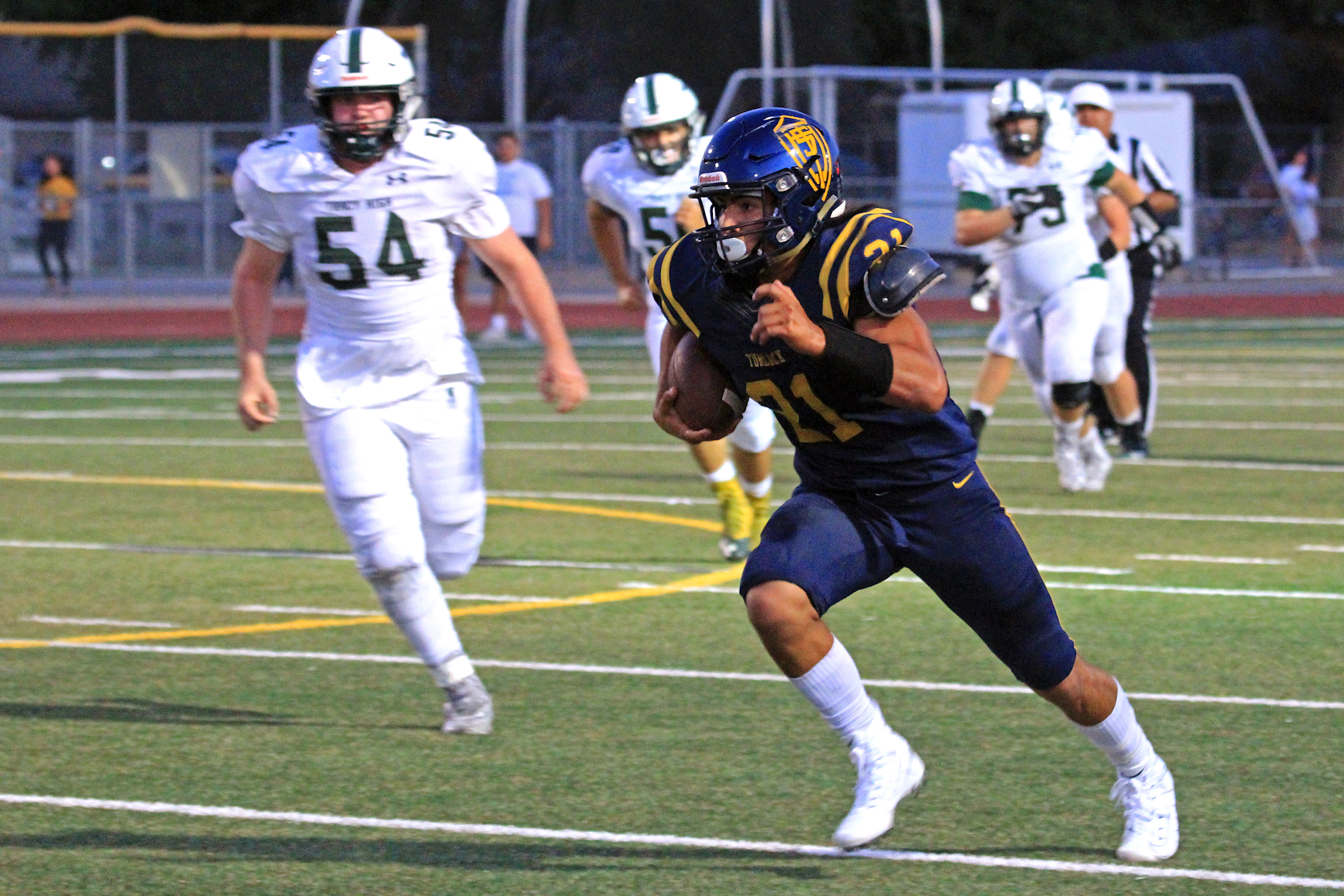 Frias also calls for some crossover help -- from his hard-to-beat football teammates.

“This is the heart and soul of tradition right here,” Turlock’s two-way star exclaimed as fans exited Joe Debely Stadium. “We have a big influence.”

Frias’ Bulldogs governed with a hammer Thursday night during an easier-than-expected 43-14 strafing of Tracy. The Dogbone, the totem of the non-league rivalry, stayed on the Turlock campus after the home team answered an early Tracy score with a 43-point avalanche.

Frias needed only nine carries to gain 137 yards and three touchdowns. The third, a 42-yard rip, finished his night on offense early in the third quarter. Before his exit, he also added two pass receptions for 83 yards and, on defense, recorded a quarterback sack.

It was his first touch, however, that dictated the game’s terms. Sprung by a trap block by 320-pound Everett Johnson, Frias stepped 79 yards between the hash marks for Turlock’s first TD.  The play demonstrated Turlock’s raw physicality and perhaps an edge that didn’t exist during last week’s road loss at Clayton Valley Charter.

“The Clayton Valley loss was a chin check for us,” Frias said. “This time we came with a different mentality. We were angry.”

The meat of Turlock’s 17-point second quarter was more of the same. Quarterback Brock Paslay, on fourth down from the Tracy 32, lofted an arcing pass to the goal line, where Holden Baldwin reached high to beat good coverage for the TD.

Minutes later from the 16, Paslay scrambled to his right, popped Revino at the goal line and carried him into the end zone.

“He (Paslay) looks like a little shy guy but he’ll give it to you,” Frias said. “He’s done it a couple of times in practice.”

Turlock, as planned, harassed quarterback Logan Fife, the Tracy quarterback bound for Cal Poly. He completed only 11 of 31 passes for 168 yards and both TD’s, but he also was sacked twice and intercepted by cousins Oscar and Christian Cruz to set up touchdowns.

“I was excited to see some of the plays we were making,” Turlock coach James Peterson said.

Fife opened the night with his best throw, a 36-yarder on fourth down to his favorite receiver Trevor Pope for the early lead. Both the quarterback and the receiver nursed ankle injuries, however, and that was the only time they connected. Pope left the game during the third quarter.

“They (Turlock) got physical. They got after it,” Fife said.“It wasn’t that we made super major mistakes. They were more aggressive than us. As the game went on, it got tougher.”

“They’re really good,” Tracy coach Matt Shrout praised. “You don’t see big guys like that across the board.”

The gavel belonged to Frias.