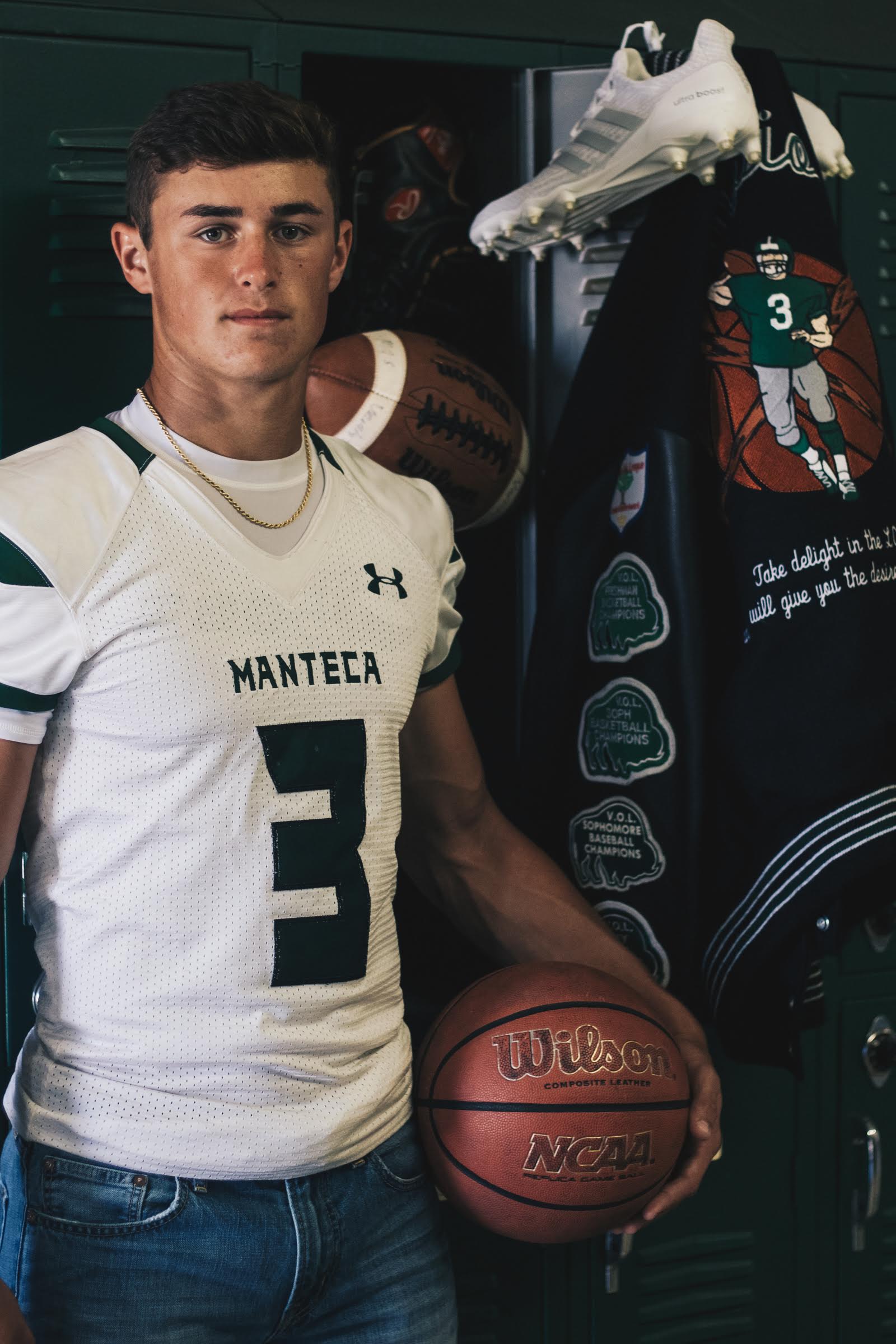 Gino Campiotti was raised a three-sport athlete, so the former Manteca High star was accustomed to the grind and sacrifice by the time he reached the Yosemite Avenue campus. Four years later, Campiotti is reaping the rewards.

He capped his decorated four-year run with a Valley Oak League football MVP award and second straight Sac-Joaquin Section title, as well as all-VOL first team honors in basketball and baseball during his senior year.

Now a freshman quarterback at Northern Arizona University, Campiotti is being recognized for his excellence across all three seasons.

Campiotti has been named Cal-Hi Sports Division III State Athlete of the Year, believed to be a first for any athlete in school history.

“Ever since I was little I’ve always played three sports so I thought there was no reason I shouldn’t throughout high school,” Campiotti said. “It made it so I didn’t have as much free time to hang out and stuff, but I enjoyed every minute of playing sports at Manteca High.”

Campiotti guided the Buffaloes to a Division III section banner, avenging a loss to VOL rival Oakdale in the final at Lincoln High's Spanos Stadium, 37-14.

With Division I college coaches on the sideline, Campiotti shredded the Mustangs’ defense, throwing for 261 yards and five touchdowns to shore up a berth in a CIF State Northern California regional bowl. Manteca hosted Saint Francis of Mountain View, another historic moment for the city’s oldest campus.

Campiotti set every school passing record along the way. He had 3,212 yards and 37 touchdown passes as the Buffaloes transition to a Spread offense under then-offensive coordinator Mark Varnum, now the head coach. Campiotti also rushed for nearly 600 yards and 15 scores.

“He is the fiercest competitor I’ve been around as a high school athlete,” said Varnum, who also coached Campiotti as a freshman at the frosh-soph level. “Everything he does, he does full go. Everything he does, he does to win. I’ve never been around a kid that has a drive like he does to be successful. All these honors he’s getting, he’s worked for every single one of them.”

Campiotti also starred for the varsity boys basketball team for three years. He came off the bench during the Buffaloes’ run to a CIF State Division III championship in 2015, and then averaged a team-high 15.6 points to go along with 5.2 rebounds and 2.0 steals as a senior.

“It shows with championship and accolades — the kid just wins,” Lewis said. “Am I surprised he won an award like this? If you think about it I don’t know how many kids are football MVPs and first team in basketball and baseball for multiple years in a row. It’s super impressive.”

On the diamond, Campiotti hit .318 and was named to the High School All-Star Baseball Classic at Delta College.

Though his legacy grows with every award, Campiotti’s focus is forward. The same drive that allowed him to succeed in multiple sports at Manteca High, propels him into his freshman season at Northern Arizona where some have dubbed him "The Truth."

“I really haven’t thought about it at all,” Campiotti said of his legacy. “There’s always more challenges in front of me, so I’m trying to take those on as best as I can.”

When asked if he had any regrets about his time at Manteca High, given all that he had sacrificed and the battles won and lost, Campiotti found motivation in his missteps and disappointments.

“I wouldn’t say regrets, but I’m definitely not satisfied with where I am at right now,” he said. “I could have done some things differently to better myself and I wish I would have taken  those opportunities more seriously at the time. I’m just going to keep working towards my goals and try to be the best I can, because that’s all I can do at this point.”