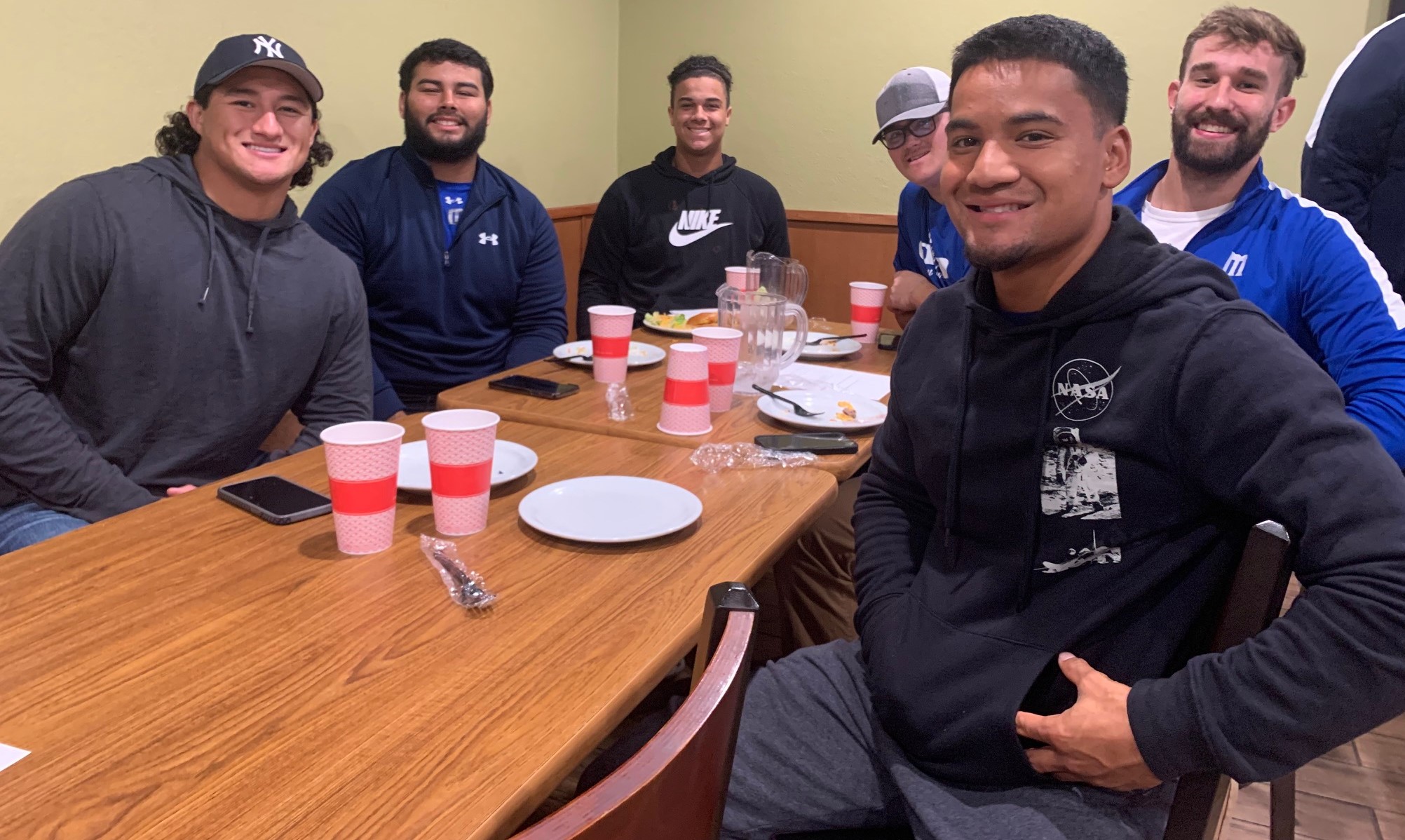 'The kids rallied': After rough start, MJC in position to take Valley Conference

MODESTO – The Modesto Junior College Pirates stumbled to 1-4, watched their quarterbacks tumble through the spin cycle and lost in ways you wouldn’t wish on your worst enemy.

And look at them now – fighting for another Valley Conference title.

“The kids rallied around the adversity,” MJC coach Rusty Stivers said Monday at the season’s final lunch meeting of the Modesto Quarterback Club.

MJC (4-4, 3-0) somehow stabilized at the start of the league season and rolled to wins over Contra Costa, Sacramento and, last weekend, Reedley 21-6. The Pirates enter the final two critical weeks, beginning at home Saturday night against College of the Sequoias (4-4, 1-2).

The goal is a fourth straight win, which could set up a winner-take-all game Saturday afternoon, Nov. 12 at Fresno City. The Rams (5-3, 3-0) travel to Reedley on Saturday afternoon. Fresno and Modesto shared the conference title a year ago.

Stivers said MJC turned around its season with eventual consistency at quarterback and sound defense. Keith Orona, a greyshirt when the season began, was promoted through a rash of injuries at QB.

“This is the first time in 23 years at MJC that we went through four quarterbacks,” Stivers said. “We put a lot of pressure on our quarterbacks. They’re like coaches on the field.”

Sophomore wide receiver Jacob DeJesus continued his solid season by catching four passes for 77 yards and a touchdown as MJC pulled away after leading 7-6 at halftime.

Then there’s the MJC defense which has allowed only 16 points in three league games.  Three Reedley turnovers also helped the Pirates’ cause.

DOWNEY – The Knights capped their historic 10-0 regular season last week with 70-13 thumping of Pitman. It marked only the third time in 71 seasons that Downey finished 10-0 and the first since 1985.

“It was a special night and a big deal to see all the old letterman jackets in the stands,” Downey coach Jeremy Plaa said. The Knights also put the final touches on their second straight Central California Athletic League title.

Downey was rewarded with a No. 3 seed – its best previous seed was No. 6 – in the Division II bracket of the Sac-Joaquin Section playoffs. That means the Knights have earned a first-round bye, and they’ll travel together to see the Inderkum-Granite Bay first-round game. Downey will be the host for the winner next week.

Inderkum and Granite Bay are not unfamiliar to Downey in the postseason. Plaa said the Knights have collided against these teams five times (four with Granite Bay) in the last 11 years.

Downey also has some unfinished business. It was eliminated by Lodi in the first round in 2021.

Senior quarterback Conner Stoddard threw six first-half touchdowns against Pitman. It served as a reminder to his excellent season  -- 2,884 passing yards (73 percent completion rate) and 35 touchdowns against only three interceptions.

NOTES – Central Catholic (6-4, 5-0), the Valley Oak League champion after its 69-7 rout of Sierra, received a No. 5 seed to begin its first foray into Division I. The 2021 Division II champion Raiders will open the postseason Friday night at home against Stagg. …

Beyer and Johansen, both 0-9 entering last week’s finale, fought predictably hard. The game went into overtime and wasn’t decided until Tek Garcia’s game-ending interception to clinch the Vikings’ 30-28 victory. Aeric Amerel rushed for 170 yards and Anthony Alves intercepted two passes and recovered two fumbles for Johansen. … Gregori (4-6, 3-2) fell to Turlock 37-13 last week but probably squeezed into the Division II bracket on the strength of its 36-30 overtime win over Enochs on Sept. 30. The Jaguars, seeded 12th, will journey to Jesuit on Saturday for a 1 p.m. kickoff. Grant Veneman threw two touchdown passes against Turlock and sophomore Alton Williams rushed for 138 yards in his varsity debut.  … Enochs (4-6, 2-3) had its playoff hopes dashed, though the Eagles beat Modesto 63-38. The game was closer than the score. Modesto (2-8, 0-5) led early in the third quarter before Enochs scored 42 points. Aiden Muhammad rushed for 145 yards and a touchdown and Logan Edwards totaled three touchdowns – two rushing, one receiving – for the Eagles. … Heston Blom topped the 1,000-yard mark in receptions for Modesto. …

Davis coach Tim Garcia called a senior-laden Ceres team (8-2) the best he’s seen this season after the Bulldogs’ 36-0 shutout. The Spartans, 10-0 a season ago, slipped to 4-6 and 3-4 in the Western Athletic Conference. … Modesto Christian (6-4), 2-4 in the Trans-Valley League is the No. 10 seed in Division VI and will ride the bus to Twelve Bridges (6-4). The new school in Lincoln won’t have seniors until next year. …

Big Valley Christian (4-5, 2-1) did not advance. The Lions finished with a 35-14 win over Delta Charter. Jameson Clark rushed for 103 yards for BVC. Coach Brian Berkefeld theorized that Gustine’s dropping into the D-VII bracket cost his team a bid. …

The QB club, the largest weekly meeting of coaches in the section, wrapped up its first season at the Denny’s Restaurant on McHenry Avenue near Doctors Medical Center.